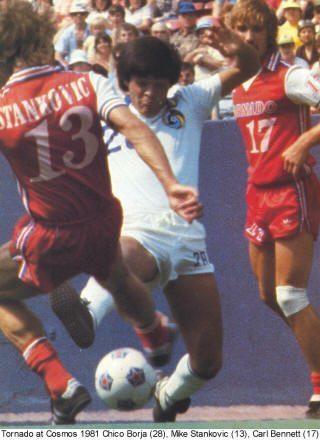 The Origin of the NASL and America’s First Soccer Boom

This is the first piece in a three-part series on the history of the NASL and its influence on MLS and soccer in America. Read parts two and three here in order to get the full story

Soccer is and has been on the rise in the US, and it has earned its place as a major American sport.

MLS continues to set attendance records and draw even more fans. Youth participation is still increasing. The signs are everywhere, and they have been for years.

Granted, it isn’t all pleasant news. The USMNT is still struggling. The promotion and relegation debate is still raging on. However, even amongst the turmoil, soccer still has a major presence in the States.

But it wasn’t always this way. There was a time when soccer was looked down upon in America. It was called an immigrants game, or a game for players who couldn’t make it in another, more “American” sport. And that was by those who had even heard of it. Most Americans either didn’t know, didn’t understand, or didn’t care to learn about soccer.

Yet even though most of the country ignored the sport, a major league began to spring up. Over nearly two decades, the league would help grow and expand knowledge of the game and plant the seeds of future American soccer success. Seeds that, among other things, would later develop into the MLS.

This is the story of the North American Soccer League.

It’s 1967. Two upstart soccer leagues have just been founded in the US after the 1966 FIFA World Cup drew a surprisingly interested North American audience.

Sports investors saw American soccer as an untapped market, and rightly so. The US hadn’t seen a successful league since the American Soccer League of the 1920s and early 30s, leaving a sure opening for a revival.

Unfortunately for the investors, enough people noticed the opportunity that three different groups were formed, each trying to found its own league.

In 1967, two leagues took the field after two of the three groups merged. The United Soccer Association was FIFA sanctioned, but was primarily made up of renamed foreign teams moved to the US in order to buy the the USA’s clubs time to establish themselves as legitimate teams.

On the other hand, you had the National Professional Soccer League. The NPSL promised fast attacking play and featured American and Canadian teams. But it was branded as an “outlaw league” by FIFA, meaning players would receive sanctions for signing with NPSL teams.

Despite the growing appetite for soccer amongst Americans, the country still couldn’t support two leagues at once. If this continued, both leagues would fall apart before they ever got a chance to shine.

But for once, common sense prevailed. In 1968 both the USA and the NPSL merged to form the North American Soccer League.

After the initial seventeen-team season featuring most of the combined USA and NPSL, the NASL quickly dropped down to only five clubs the next year. But the league steadily began to increase in size.

By 1973, the league had nine clubs, and was set to expand in the coming years.

That season, Sports Illustrated would feature Philadelphia Atoms goalkeeper Bob Rigby on its cover. That marked the first in a series of major successes that would thrust the NASL into the spotlight.

1974 brought more success. That season saw the league add a net gain of six teams, and increase its average attendance to nearly eight thousand a game. The 1974 NASL Championship Game was even televised live nationally by CBS.

But even though those successes would indeed boost the leagues popularity, none would compare to the impact of one single signing.

One man would single-handedly boost the popularity of the NASL like never before. One man would change American soccer overnight.

That man was quite possibly the greatest player of all time.

On June 10, 1975, the New York Cosmos signed Pelé to a contract. The league would never be the same.

Enjoy this piece? Read parts two and three, and be sure to check out more of GritDaily’s sports coverage