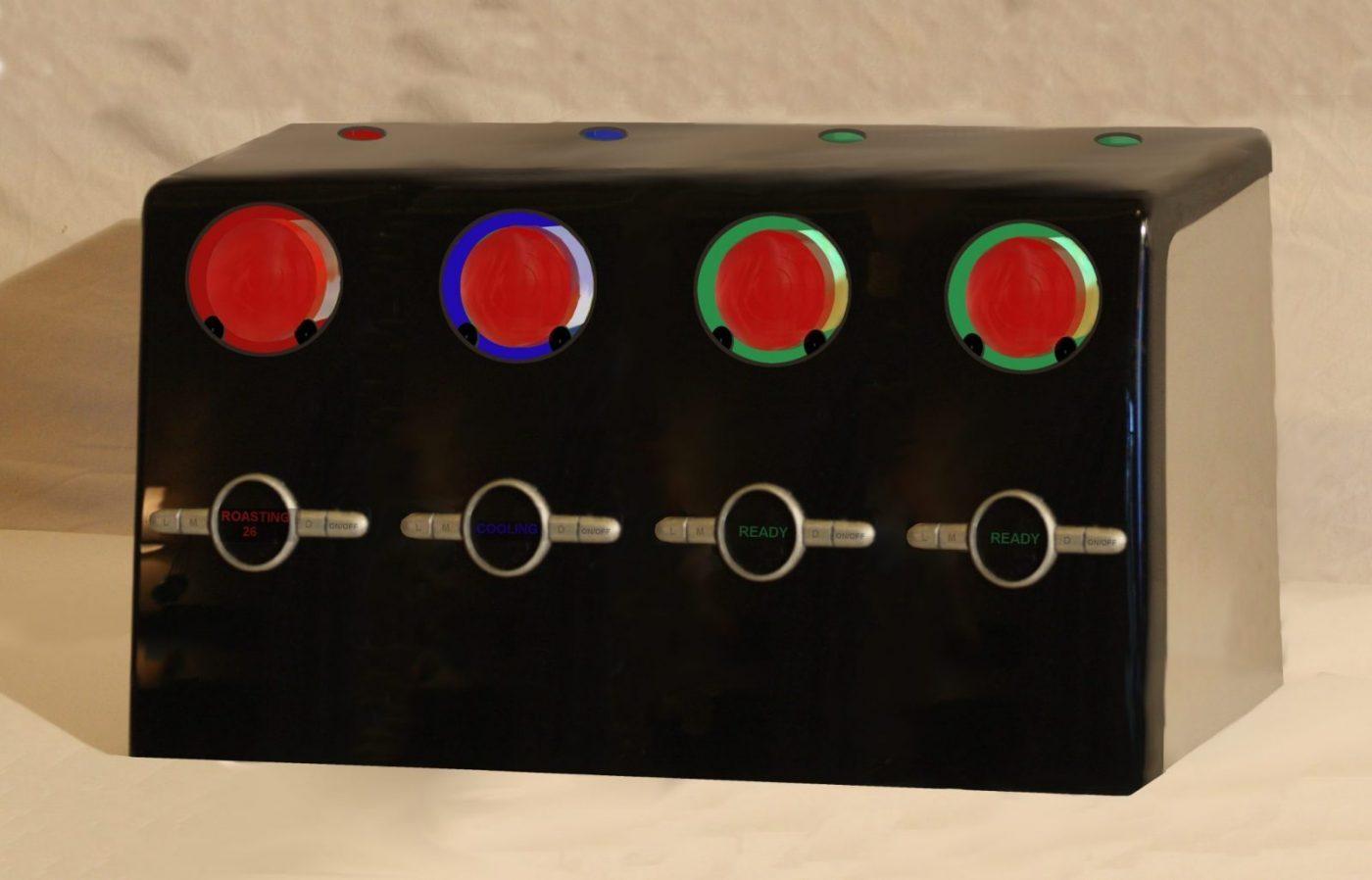 Get ready to rev your engine. Or in this case — your coffee roaster.

Inventor Glen Poss apparently isn’t afraid to rustle some feathers. In fact, he’s betting on it. For nearly 20 years he’s been dreaming up a new way to roast coffee that eliminates the need for coffee sourcing trips, big roasting gear, and even roasting training—three things that coffee industry giants point at to demonstrate top-dogness.

He believes he’s on the cusp of decentralizing the coffee roasting industry with his 20-years-in-the-making invention: The Aria Coffee Roaster. Naturally, we hopped on a call to see what the Aria’s all about.

The idea came to Glen back in 1999 when his friend let him borrow a small home coffee roasting device: “I spun the little machine up, it smoked like crazy, the chaff caught on fire, and it was as noisy as a vacuum cleaner. The machine was s***, but I realized the market and business looked pretty good.”

Glen spent years exploring ways to make coffee roasting accessible to the consumer. He knew if he wanted to enable mass adoption, it couldn’t be a device for hobbyists. It had to be as simple as an appliance. “It can’t be about being an artisan. It’s about getting the customer what they want, in their pajamas, while they’re hungover. It has to be easy as toast.”

He claims he invented three new ways to roast coffee—two of which wouldn’t ever work in a consumer environment. But the third way, which Glen’s not ready fully disclose, is truly novel. “Say it’s ‘zero airflow’ roasting,” he said. “No smoke, no odor, steam, takes less than ten minutes—if they can guess how we do it, I want them to come work for me.”

We can say, however, what the result is: a countertop roaster that can go from room temperature to 700 degrees Fahrenheit in just 3 seconds. There’s no smoke, no odor, and no oxygen in the roasting chamber, which means there’s no risk of the thin chaff catching fire. The single-cell consumer model is expected to retail at $199.

How the Aria Coffee Roaster works

At first glance, the Aria doesn’t seem to depart from the typical roasting routine: consumers pull out a pouch of pre-portioned green coffee beans sourced and delivered by Aria, scan the RFID chip and select one of the four suggested roast profiles (much like the Bonaverde, or the Kelvin), put the beans in the device, shut the door, and press start.

When the roast is complete, somewhere between four and ten minutes later, cold water is pumped around the roasting chamber, instantly cooling it to a safe 150 degrees.

But here’s where things aren’t so normal. The four recommended roast profiles for each bean include three standard profiles—light, medium, and dark—but also one that completely defies the conventional wisdom of coffee roasting: ‘high delta’.

Glen wanted to recreate the coffee roasting process involved in the Ethiopian coffee ceremony. Rather than being a single roast level from surface to center, these coffees are more like a rare steak, featuring varying roast levels within a single bean and leading to an unusually complex flavor experience (though many will argue this introduces imbalance).

But Glen didn’t want to stop at four options. Consumers can decline the suggested profiles and choose any one of nearly 100 roast profiles that are loaded onto the machine at any point.

There’s also an app that lets the more experimental home roasters take full control over their roast profiles—but there’s a catch: they’ll instantly void the warranty of their machine.

“The app’s a use at your own risk kind of thing,” Glen explained. “If someone wants to try roasting an empty cartridge at 700 degrees for ten minutes and melt the steel, well, that’s on them. We have no control with the app, so there’s no warranty.”

Dreaming of disruption in the coffee industry

Glen touched on something we’ve written a lot about at The Spoon: the democratization of coffee roasting. By building a commercial model of the Aria, he intends to take roasting away from remote facilities and put it directly in the hands of baristas and cafes.

“Roasting facilities cost a lot of money, labor, and time. Then you have to ship out the beans everywhere,” Glen said. “With our tech, whether it’s in cafes, restaurants, or at home, you don’t need to raise any money or get permits. That’s how we disrupt coffee: we decentralize it.”

But Glen’s not the only one trying to beat the hub-and-spoke model. Bellwether Coffee, whose zero-emission coffee roasters require no permit or ventilation to operate, is already giving the power of on-site roasting to cafes around the country.

Glen’s approach, however, is quite different from Bellwether’s. The Aria roaster is “based on the idea of a multi-engine craft: you can run as many or as little as you need, and if one ‘cell’ dies, you have backups so you never ‘crash’.”

The 4-cell commercial Aria model will enable everyday baristas to roast coffee for customers on demand, with an output of up to 7.5 pounds of roasted coffee per hour.

Once again, this flies in the face of conventional wisdom, which says that coffee needs at least 24 hours to “degas” before it’s ready to be brewed for maximum flavor and balance. Glen isn’t worried, however, because he claims the technology is so different that it enables coffee to be roasted, brewed, and enjoyed within minutes of each other without sacrificing quality.

Glen and his team are actively seeking a CEO who can take the Aria Coffee Roaster to investors, then to market in the next few years.

The post This New Kind Of Coffee Roaster Goes From Room-Temp To 700° In 3 Seconds
appeared first on The Spoon.