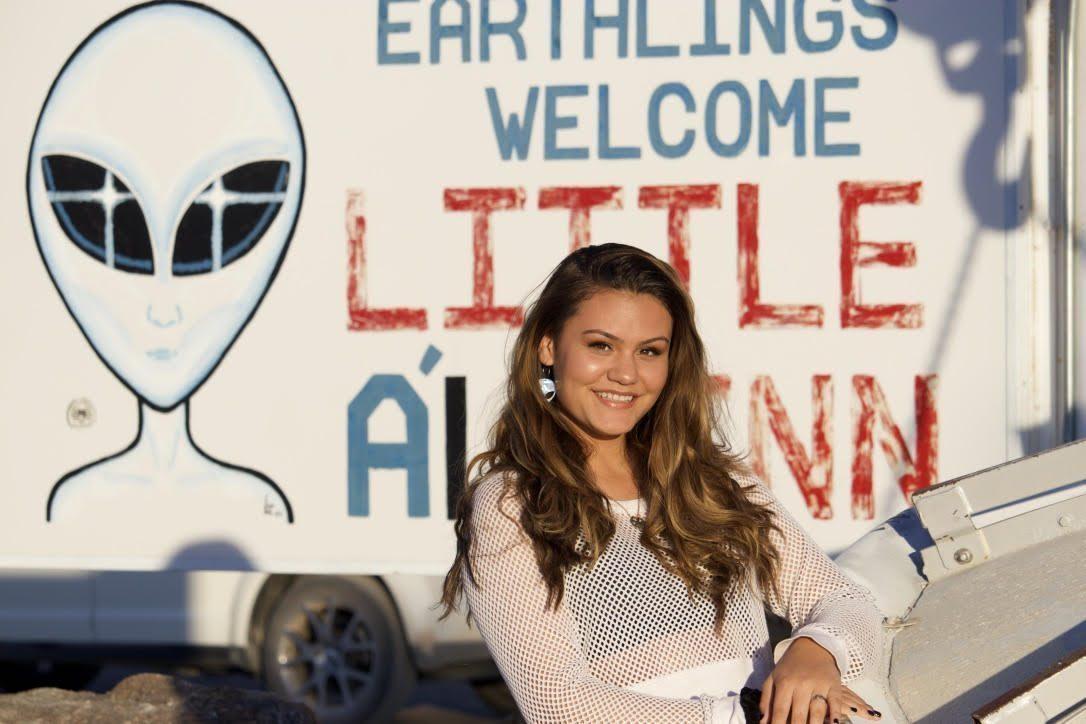 Not all heroes wear capes. Some naruto run on television and dress up as aliens. What started as a viral, Facebook event to storm the gates of Area 51, morphed into Alienstock Festival, the multiday gathering in rural Nevada.

Area 51 has been a rich piece of American pop culture for decades—with Hollywood adaptations such as Independence Day and The X-Files bringing Area 51 to life.

Time to Do the “Naruto”

But, in June 2019, Matty Roberts, 21, of Bakersfield, California, created a Facebook event called Storm Area 51, They Can’t Stop All of Us, as a joke, urging people to raid the U.S. government facility on Friday, Septemebr 20th, at 3am local time.

For the 2 million people that RSVP’d for the event, to “all meet up at the Area 51 Alien Center tourist attraction and coordinate our entry,” the original text read. “If we Naruto run, we can move faster than their bullets. Let’s see them aliens.”

“Naruto run” refers to an especially awkward way of running depicted in the Japanese anime, Naruto, where main character Naruto Uzumaki flings his arms out behind him.

The event caught the attention of the U.S. Military and U.S. Air Force, issuing an official warning, reminding all would-be-alien-seekers that Area 51 is still off-limits to civilians, and resources would be on site to turn everyone back.

The event brought together America’s fascination with extraterrestrials and the mysterious Area 51, with a lot of questions to be asked about this semi-real event.

Roberts claimed that he created the page as a pure joke, but that joke went viral in July, spawning memes about aliens moving into people’s houses and the military trying and failing to prevent a bunch of anime-quoting teens from entering the premises.  Even Lil Nas X, the Billboard record-breaker and rap sensation even released a music video for a remix of his hit song, “Old Town Road,” heavily mentioning the event.

Initially, Roberts and other organizers worked with Connie West, who owns the Little A’Le’Inn Motel in tiny Rachel, Nevada, to create an alien-themed music festival dubbed “Alienstock” to be held in the Rachel area September 19-21. It’s a first for this tiny town. Rachel has roughly 50 residents, most of whom are retired, with no gas station and no street lights.

Alienstock was the only event in Rachel that released a musical lineup prior to the weekend—with bands including Speed of Light, a punk bank composed of a trio of teen siblings, Brothers of Alien Rock, which fittingly dresses up as aliens and has an entire extraterrestrial lore, an all-girl pop group called Punk Le’monade, and ELYSE, a prodigy musician picked up by Disney record producer, Andrew Lane.

Grit Daily was able to catch up with ELYSE who personally attended the event as one of the headliners. Signed by Disney music producer, Andrew Lane, Elyse Williams (ELYSE) has been gaining notoriety since she was thirteen with her performances in local school theatrical productions.

ELYSE’s newest project is “Next Level,” the song-and-dance-drama, now available to the public, about a summer camp for teen enthusiasts of the show business. Former Dance Moms star, Chloe Lukasiak portrays the film’s main character, Jasmine Joel. While Lukasiak isn’t a victim of bullying, Lauren Orlando’s character, Kelly, is. Lukasiak spoke with Hollywood Life about why she’s glad the film addresses the important issue of bullying.

ELYSE wrote the film’s self-titled song, “Next Level,” sharing with us that this was the first time she has written a piece for a film or movie.

“I was given a track for the title song, the name of the movie, and a few pieces of the scrip tby the music supervisor, Andrew Lane,” she told us. “As an artist, I write my own songs and I had written some songs for other vocal artists of Lane’s, so he gave me this amazing opportunity to write the title song. After reading the script, thinking about the title, Next Level, I just started writing.”

Lane,  the power behind High School Musical, Hannah Montana, Disneymania 4, and Manny Fresh, has stood by Williams along her journey.

However, approximately two weeks prior to the event, Roberts pulled out, reportedly due to concerns surrounding the ill-fated Fyre Festival, instead urging people to go to another event held at the Downtown Las Vegas Events Center.

“Due to the lack of infrastructure, planning, and risk management, along with concerns raised for the safety of the expected 10,000+ attendees, we decided to transition Alienstock away from Rachel,” Roberts tweeted, and to the Downtown Las Vegas Events Center, on the evening of September 19, which was co-sponsored by Bud Light.

Coincidentally, another event, also called Alien Stock, was held at the Downtown Las Vegas Events Center on September 19, featuring electronic dance music (EDM) and unique are. Roberts, who started it all, was involved with the event, where “hundreds” of people attended, according to Las Vegas NBC Channel 3.

So What Happened In Rachel?

According to reports, anywhere from 1,500 to 2,000 people attended the events in the area. An estimated 75 people showed up on the back gate of Area 51 on Friday morning for the “raid,” which was based on Roberts’ Facebook hoax event.

A total of five people were arrested for various minor incidents surrounding the events, such as public urination. Several minor injuries were also reported, including a man treated for dehydration in Rachel. Nevada claims to have expended $250,000 in preparation for huge crowds.

You Can’t Storm Out of this Lawsuit

For now, whether aliens exist still happen to remain a mystery. However, what’s not a mystery is the pending lawsuit that Nevada business owner, Connie West, has against Roberts, creator of the Storm Area 51 craze, along with Hidden Sound LLC, Frank DiMaggio, John Greco, and Brock Dailythe for more than $50,000 over actions revolving around the Alienstock event and its origins.

Grit Daily will be following this lawsuit closely.