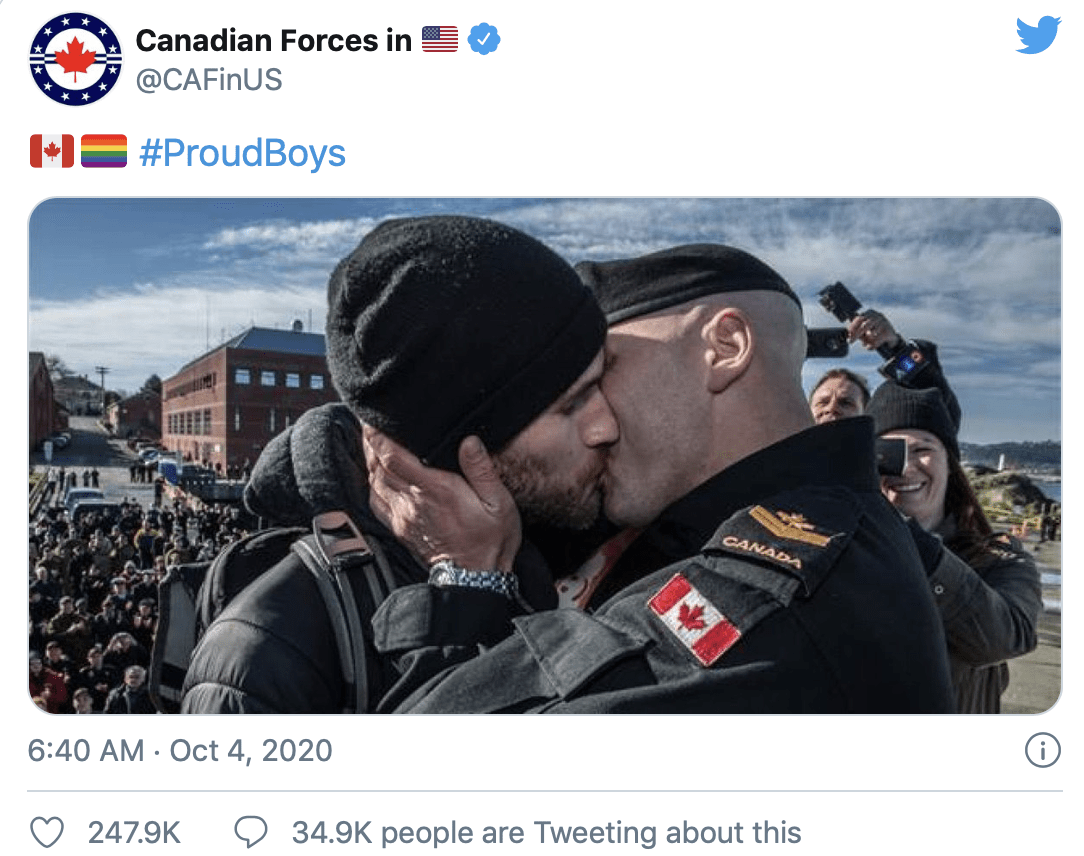 The #ProudBoys Hashtag Has Been Repurposed To Honor LGBTQ+ Pride

The name of a right-wing all-male group associated with white supremacy and Neo-Nazism has been repurposed on Twitter after thousands of gay men are utilizing the #ProudBoys hashtag to express pride in their sexuality on the app. The Proud Boys have drawn increased attention in recent days after President Trump directed the group to “stand back and stand by” during the first Presidential debate last month. Now, Twitter users are attempting to reclaim the phrase as a positive movement.

The Proud Boys, a far right group, rose to fame this year after the George Floyd protests sparked a major uprising around the world in a call for people to recognize and dismantle the ways in which racism still thrives to this day. In response, the far-right militia began counter-protesting as a response to “Antifa”—anti-fascist movements in the United States. The group believes that white men and Western culture are being attacked by diversity initiatives.

The group, founded by Gavin McInness (who co-founded Vice Magazine and was a formative figure in hipster culture in the early 2010’s) openly condemns white supremacy and ties to racism. However, the group has been linked to several instances of violent extremism in recent years, most recently in Colorado, that have raised red flags among federal agents. In 2018, the group was declared by the FBI as an extremist group with ties to white nationalist ideologies.

Gay men on Twitter have re-appropriated the hashtag over the last couple of days as a way to flood the hashtag feeds with an outpour of LGBTQ+ pride rather than information about the group. The hashtag was relatively quiet throughout the rest of the week after President Trump refused to condemn the group at the Presidential debate, but gained traction over the weekend as thousands of gay men used it to post in solidarity with one another.

Actor George Takei may have been the origin of the idea. Takei Tweeted on October first to call on K-pop fans and TikTok users to flood the hashtag with LGBTQ+ friendly support to drown out its association with the white supremacist group. In June, both groups took responsibility for messing with President Trump’s campaign data after sending mass RSVP’s to his Tulsa rally with no intention of actually showing up. In many cases, K-pop fans on Twitter will flood a popular hashtag to drown out the information it might contain. The long-running gag on the platform has highlighted how data can be manipulated and information can be buried using an army of separate accounts.

In this case, however, the #ProudBoys hashtag appears to be populated almost entirely by posts from gay men posting about their significant other or pride in their sexuality. Even the official Twitter account belonging to the Canadian Armed Forces used the trending topic as an opportunity to stand in solidarity by posting a photo of two gay Armed Forces members kissing.

Forbes reports that members of the actual Proud Boys group are infuriated with the news that the hashtag has been re-appropriated on Twitter. Officially, the group is banned from having its own Twitter account, and many of its members have also been banned for violating Twitter’s terms of service that states hate speech is not allowed on the platform.