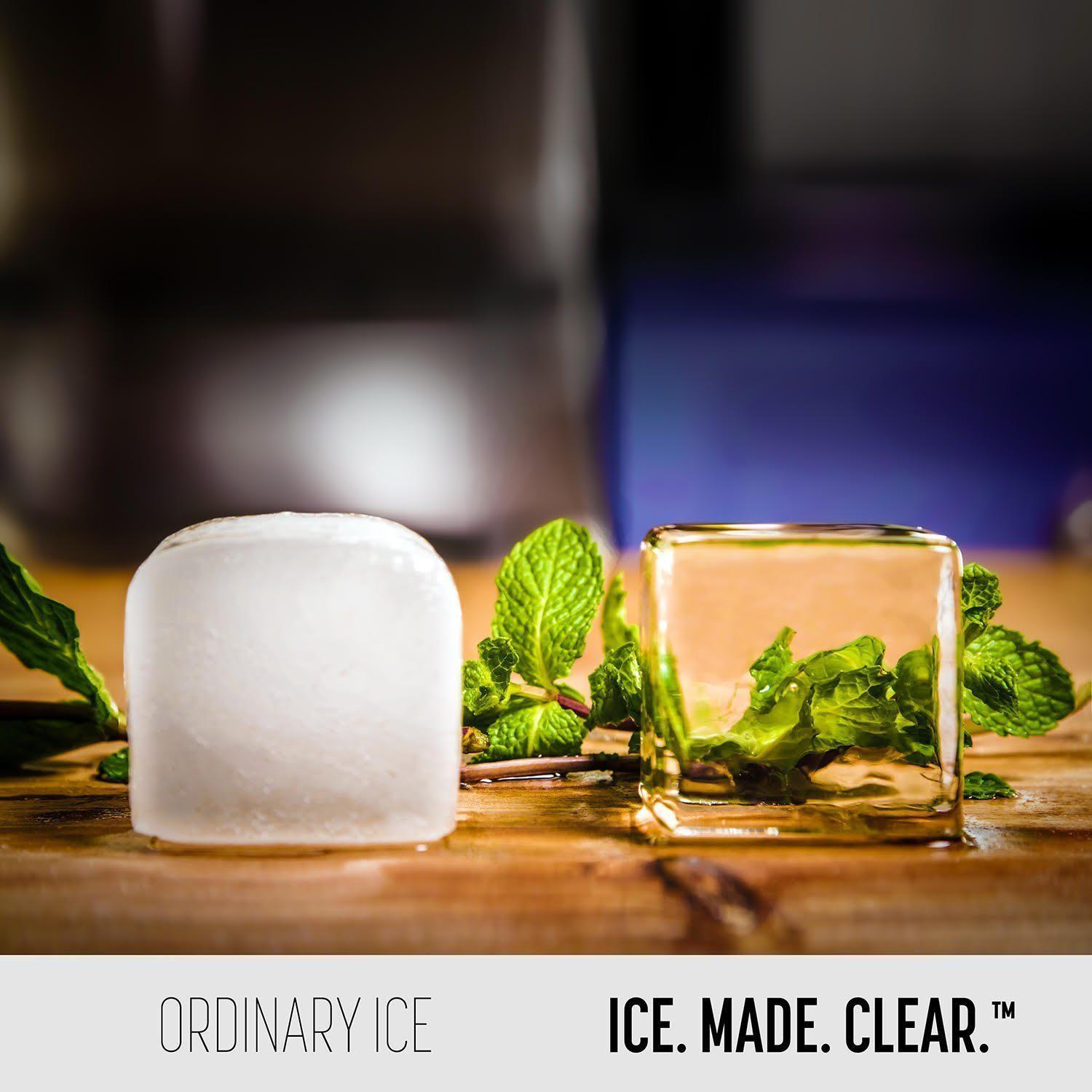 Much like the oven, microwave and the fork, some things we just take for granted. One of those is certainly ice. It’s seemingly just about every where to cool off your favorite beverage.

But there is an ugly side to ice. The cloudy version that’s probably in your freezer — right now — is troubled with gas. That gas might just be “freezer air” — bit it still just sounds bad. “I’ll take my ice gassy,” said no one ever. But there’s an easy solution.

Or at least that’s the thinking behind Ice Made Clear, a Lafayette, Indiana-based start up led by former documentary director, Joe Myers. Grit Daily dives deeper into the story of ice for a bit more clarity — no pun intended — on clear ice and how it can “up” your cocktail-making game.

Grit Daily: You had your own interesting entrepreneurial adventures before Ice Made Clear. Share those.

Joe Myers: I went to film school and I’ve worked as a filmmaker for some time. I began my career by directing documentaries for a PBS affiliate. After a few years, I started my own production company with two colleagues. We have two lines of work. The first is our feature-length documentary work. We conceive of, raise money for, produce, direct, write, edit and deliver these films — largely for the PBS system.

The second line of work we pursue is for-hire. This work is in the university and non-profit worlds. For universities we create short fundraising films used in large development efforts. With non-profits, we create short films designed to spread good practices in areas like green building and sustainability.

A few years ago, I began working with a law professor. He joined a documentary project I was directing as an advisor. We became fast friends as we began to talk about our mutual fascination with storytelling as a means of persuasion. We started to discuss the ways in which the trial form itself is a story. If we took this idea seriously, might lawyers more actively apply the precepts of storytelling to the trial?

Could they improve the persuasiveness of their cases with juries and judges? Our conversations evolved into a framework for applying the precepts of storytelling to a lawyer’s entire approach to trial work. In recent years, we’ve been offering seminars and consultation services for lawyers. We teach a systematized rubric for persuasive storytelling that resonates with the logical tendencies of the legal mind.

Storytelling is at the heart of all my professional ambitions, and there is so much more for me to learn. I realize something new about how to be a good storyteller every day – and often from talking to people in disciplines that are not my own. As humans, we’ve always made sense of the world through stories. I believe that taking your audience on a good story journey is the most effective way to change minds or persuade.

GD: Ice? Haven’t we been making ice for millennia? What’s wrong with the current crop of ice?

JM: We humans actually haven’t been making ice for long! Electricity and refrigeration made it possible to make ice. Before that, we’d cut blocks from ponds and lakes. Nature did the real work. Today, nature still does a better job. Take a look at a frozen lake before it’s covered with snow, skated on, or otherwise roughed up. The first couple inches — sometimes feet — of ice are crystal clear. It’s like glass. It is air-free and dense. Thus, it is very hard, slow melting, highly pure, and visually stunning.

Compare that to the little half-moons we get from our ice making freezers — if you are lucky enough to own one. They are white and cloudy. They are soft and melt quickly. And that cloudiness? That’s freezer air. It’s the stuff that often gives an off-taste to your drinks.

GD: Why bother with clear ice anyway? Isn’t it all just the same H2O?

JM: Yes. Same water. Same freezer. Better ice. That’s the point. Clear ice is better in a couple ways, and for the cost of a nice bottle of bourbon, you will enjoy your drinks more, and your friends will be suitably impressed by your bar service.

First, clear ice melts slower, cooling your drink but not watering it down. This happens because it lacks most of the dissolved air in regular ice. There is more ice where the air usually is – more ice = more cold; also, with less air pockets in the cube there is little to no pitting on the exterior, so less surface area is exposed to warm liquid – less surface area = less melting. Second, it tastes better. With less stinky freezer air dissolved in the ice, your drinks don’t pick up foul flavors. Third, clear ice is stunning. Pour a drink over clear ice and you’ll see the ice largely disappear. It never gets old, and it’s an awesome party trick.

GD: What’s the “secret sauce” to making such clear ice?

JM: Back to nature. When lakes freeze, the water on the top surface freezes first. The sides and the bottom are insulated by the earth and freeze much later – if at all. When any water freezes it tries its hardest to push the gasses dissolved within, out. In the case of the lake, there is plenty of liquid water beneath the frozen surface into which the gasses can migrate. Hence, the top layers of ice are crystal clear.

In your freezer at home, things are different. A standard ice tray isn’t insulated. As the water in an ice tray freezes, the top freezes as the lake does, but so do the sides and the bottom. There is thin plastic or silicone separating the water from the cold freezer. This water too ‘wants’ to push out its dissolved gasses as it freezes, but where can it go? All sides of the cube freeze at once and the only place left to deposit the gas is in the center of the cube. Cloudy ice.

Ice Made Clear borrows the natural physical process of directional freezing. The IMC base is insulated on the sides and bottom with the highest R-value foam. The silicone ice making tray nests into the top of the base, and both the base and tray get filled with water. The top surface of the water is then exposed to the cold freezer. like the lake, the water on top freezes first, and the dissolved gasses migrate downward. There are tiny holes in the silicone tray that allow the gasses to migrate into a reservoir of insulated liquid water below the tray. After the cubes freeze, you simply remove the silicone tray from the base and enjoy the clear ice.

IMC differentiates itself three ways. Quality, proprietary innovations that make the ice-making process especially easy for the customer, and future-proofing – there are new shapes on the way that customers can add to their sets.

GD: Who is buying?

JM: The largest group is men over 30. But, by no means are these the only buyers. We have many women customers. I have lots of return customers who after using IMC themselves have come back to buy multi-packs to give as gifts. I’ve also had buyers from bars and restaurants who are testing IMC in their cocktail-making workflow. I’ve done a few wholesale orders, notably I did a flash sale with Touch of Modern.

GD: In your case, how did you decide whether you want to take an “enterprise sales” approach or go directly to consumers?

JM: I have just recently transitioned from crowd-funding through Kickstarter and Indiegogo to selling IMC directly from Ice Made Clear. I like the direct sales approach because it affords me the opportunity to have a much more expansive conversation with potential customers. They can take the time to not only understand the product, but also learn about my motivations and have their questions answered.

For example, IMC is not inexpensive for me to produce. Part of the reason is that the base — the key to the system — is made by a small, U.S.-based manufacturer. Having it made in the U.S. has advantages, not just for U.S. workers but it allows me to do in-person quality-control inspections and to also be more nimble with design improvements. These kinds of decisions on my part affect the final retail price of the product, but they also matter to many customers. Ultimately, I want the customer to understand that this is a thoughtfully crafted product, not a commodity. A medium that allows for a full story to be told is helpful in communicating this, and direct sales is a good fit.

I am also interested in doing more wholesaling of IMC. That said, I think it makes most sense to do it on a case-by-case basis when the retailer offers a good opportunity for me to make a personal connection with the potential customer. They get more sales, and I have more happy customers.

For more of Grit Daily’s Spotlight, check out the archives here. And for those readers in Indiana on Saturday, September 14, check out Grit Daily Executive Editor Jordan French on stage at Greater Lafayette Commerce and in conjunction with MatchBox. It’s free, with pizza and drinks — and hopefully some clear ice to go with it.