2020 has definitely been off to a shaky start. There have been over 950 earthquakes in Puerto Rico this year and we are only sixteen days into the new year. But with today’s new age of climate change, how can we continue to travel without upsetting the balance and harming our environment further?

The Bahamas, which rely on tourism for the $4.3 billion that make up 47.8 percent of their GDP, are still recovering from Hurricane Dorian. As Australia’s wildfires have merged into a 1.5 million acre mega fire, Prime Minister Scott Morrison petitioned U.S. leaders to stimulate tourism by downgrading the urgency of their travel warnings.

Just two days ago, the Trump Administration heeded Prime Minister Morrison’s pleas to water down travel warnings to ‘Down Under,’ which has now been set to “normal”. The nickname ‘Down Under’ was born as a result of the European explorers who were looking for a land located below the continent of Asia, commonly referring to the continent of Australia.

These are examples of how climate change is interacting with tourism, an $8.27 trillion global industry with a compound annual growth rate of 2.9 percent. Ethical marketers have a responsibility to present tourism and brands within the tourism industry within the context of our shifting climate reality. But there isn’t a one-size-fits-all way to approach this, and we’re going to need some creative solutions.

Let’s Start By Not Encouraging Travel Where It’s Harmful

To start with, marketers should be cautious about where they’re sending tourists. Promoting vacation packages to the Australian Open when Melbourne is shrouded in smoke, puts your customers at risk. Other trips could be putting the destination at risk.

New cruise lines have popped up in the last year to shuttle tourists to Antarctica while it’s still there.

“Climate change is a chief reason for the increased interest in visiting Antarctica,” cruise travel planner Mary Curry told the New York Times. “We truly don’t know if the region will ever be as magnificent as it is now.”

According to the article, Antarctica cruise bookings have seen a 53 percent spike since 2015. But cruises aren’t helping the environmental situation. A day at sea produces as much soot as a million cars. Cruises dump toxic raw sewage into the open sea. They’re not doing Antarctica or its wildlife any favors by being there.

Related: How Climate Change is Impacting Your Daily Nutrition

At other port city destinations, cruises also squeeze local economies with bullying tactics that create dependency. While cruises are still growing in popularity, environmentally and socially conscious marketers need to look for sustainable alternatives to drive tourism where it helps instead of hurts.

Instead of Antarctica, why not promote midwinter trips to the Bahamas, where tourist money is needed to rebuild?

Instead of a cruise, why not promote the ferry from Fort Lauderdale?

Rethinking the Carbon Footprint of Each Trip

Travel marketers are in a unique position to normalize thinking of a trip in terms of its carbon footprint. A study by Responsible Travel calculates a five day trip from London to Western France as producing 183.5 kg (404.5 lbs) of CO2e. That’s broken down into food (77 kg), accommodation (26.5 kg), and transportation (102 kg for a flight).

The flight for a trip like this, from London to Biarritz, takes about five hours, give or take an hour depending on your layover time in Paris. It’s comparable to a flight from New York to LA. Going by train, you can get to Biarritz in a little over 7 hours. It costs a couple hours more—or affords you some extra work and nap time, if you present it that way.

It’s a small time difference, and it saves your customer a few bucks: $121 (USD) for a train compared with $150 for a flight.

More importantly, the train ride cuts the carbon cost of transportation in half, bringing the total carbon footprint of the trip down by 51 kg (about 112 lbs) of CO2e.

That saves you about the amount of emissions the average US citizen produces in a normal day.

Now, let’s be real about something. Climate change is a much, much bigger problem than can be solved by taking the train instead of an airplane. Nevertheless, knowing that efficient rail travel effectively halves the carbon cost of a trip means that responsible travel marketers should be putting everything they’ve got into pushing rail service over flights.

It’s an easy sell. Trains are roomier. You can get up and walk around. They won’t dump jet fuel on a schoolyard full of children, as a Delta flight did this week in LA. There’s a lot to like. Better marketing could encourage the development of cleaner, cheaper, more efficient rail systems in the US. And systemic changes like that do have the power to combat climate change.

Tourism has certainly contributed its share to the climate change emergencies we’re now facing, and as the climate bites back, we need to rethink what it means to market travel responsibly.

People aren’t going to stop traveling. Let’s just make sure we’re sending them to the right places, and using the most sustainable means to get them there. 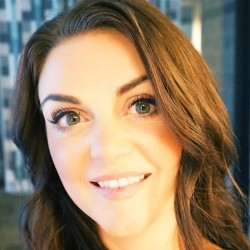 Tina is a Staff Writer at Grit Daily. Based in Washington, she speaks and writes regularly on sustainable marketing and entrepreneurship practices. She’s carved out a niche in digital media and entertainment, working with brands as CBS, Vanity Fair, Digital Trends and Marie Claire; and at such events as The Academy Awards, the Billboard Music Awards, the Emmy's, and the BAFTAs. Her writing has been featured in a regular column on Forbes, Thrive Global, Huffington Post, Elite Daily and various other outlets. For her work, she’s been recognized in Entrepreneur, Adweek, and more. Tina also founded a non-profit, Cause Influence, to expand the reach of important social causes. Under her non-profit, she takes on pro bono clients with an emphasis on equality and representation. She also founded and manages a media company called Et al. Meaning “and others,” Et al.’s mission is telling the stories of underrepresented individuals and communities.

Kelly Hyman, founder of The Hyman Law Firm, P.A., Has Some Legal Advice for Entrepreneurs