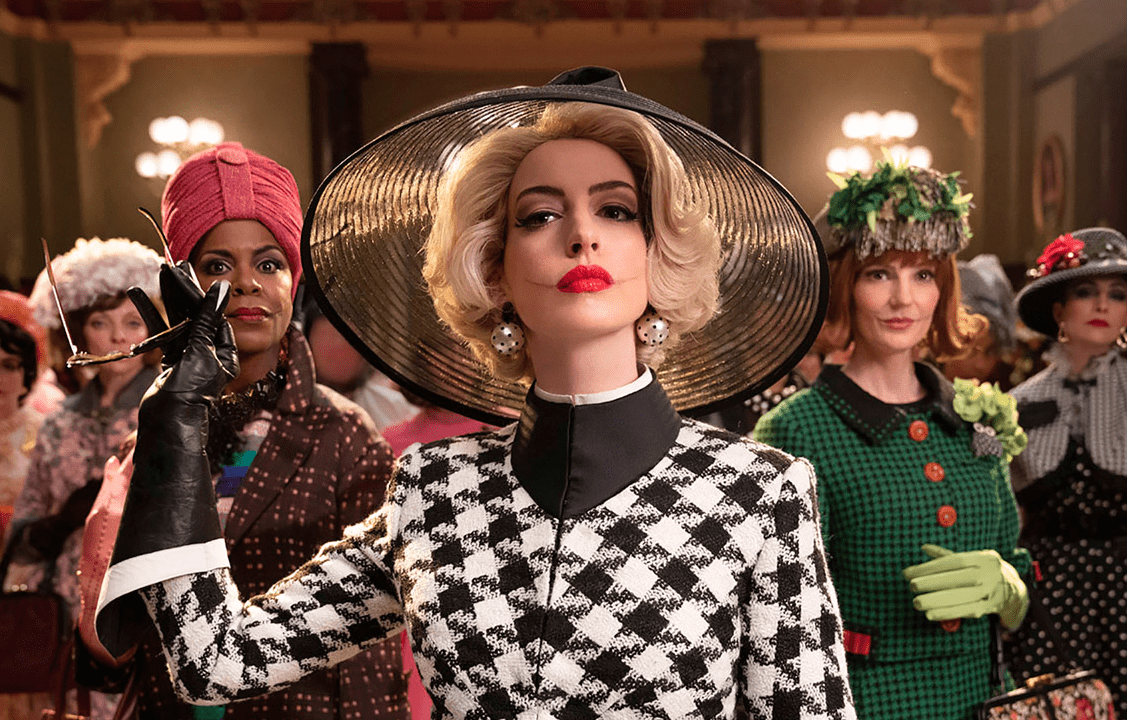 The Witches is one of the more varied mixed bags from filmmaker Robert Zemeckics. The iconic director behind Back to the Future and Castaway takes on an iconic author, Road Dahl, and the results are frustrating. Zemeckis’ adaptation of Dahl’s terrifying childrens’ novel has its fun and scares, but is lacking elsewhere where it matters.

Witches loathe children. They want to exterminate them like rats. Grandma (Octavia Spencer) warns her grandson, Bruno (Jahzir Kadeem), to always keep an eye out for the magical devils. Grandma took Bruno in after the death of his parents. She protects him and loves him and brings him back to life, and in this regard Spencer and Kadeem make their roles sincere. One day, the grandmother and her grandson find themselves in a hotel filled to the brim with witches, led by Anne Hathaway as the Grand High Witch. The Witch and her witches turn children into rats, including the young and brave Bruno.

The scene in which Bruno is turned into a rat is the high point of the movie. Similar to Nicolas Roeg’s terrifying adaptation, Zemeckis isn’t afraid of scaring the wits out of children in this scene. It is scary. The witches aren’t as unsightly as the original film’s, but they do make your skin crawl. Hathaway is a ball to watch, too—and when the scene calls for it she makes a frightening villain. She’s splendid. She nails the fun and scariness of the Grand High Witch Down, paying tribute to Angelica Huston’s iconic performance while making the role her own.

The big scene in which the Witch reveals her plans and turns kids into rats highlights the movie’s greatest strengths and one of its most fatal flaws. There’s a narration from Chris Rock that doesn’t click at all. It kills scenes. It squashes momentum and atmosphere, takes you right out of the moment, and it’s redundant, at least until the movie’s fifth ending when there’s an unnecessary payoff. There are too many endings in this movie, as well, like it keeps going when the show is already long over.

The movie is too much at times, similar to a few of Robert Zemeckis’ most recent movies. There’s zero restraint, especially in the CG department. The Witches is often beautiful and colorful, calling to mind the vibrancy of Dahl’s stories and previous adaptations of his work. The movie looks like candy, meaning some kids will probably find themselves glued to the screen.

There is some Zemeckis magic on display when he moves the camera like only he can and free of constraints. Zemeckis can overdo it, though, when he calls too much attention to technology, not storytelling. The movie is packed to the brim with ill-looking CGI. The Witches live in the uncanny valley at times, similar to Zemeckis’ motion-capture movies like The Polar Express and Beowulf. At times, The Witches is a treat to the eyes, and at other times, it’s an unbelievable cartoon.

When The Witches doesn’t come across as a cartoon, though, it’s a good movie. Zemeckis, like all great filmmakers, doesn’t shy away from scaring children. There are freaky deaky sights in this movie, frightening for both adults and children. That’s always wonderful to see in a childrens’ movie — a filmmaker who trusts kids as audience members.

There’s plenty to appreciate and enjoy in The Witches, especially the lead performances and the scares. Like Zemeckis’ 21st filmography, though, the adaptation is inconsistent to the point of frustration. The Witches is both charming and frustrating. It is a massive step up from Zemeckis’ previous film, Welcome to Marwen, which lacked any sense of humanity and wonder. At the very least, The Witches does have a little humanity and wonder to latch onto when the ride gets bumpy.

The Witches is now available on HBO Max.