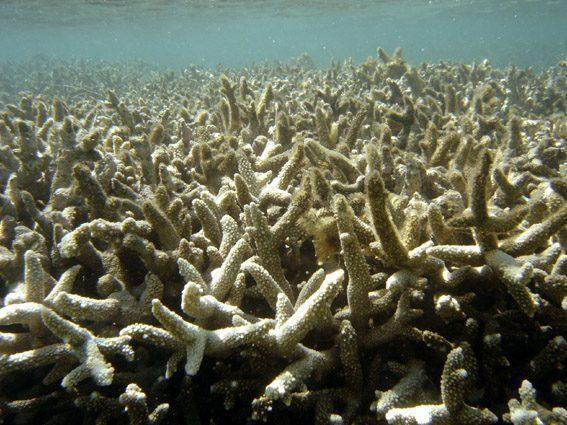 The Pacific Ocean Blob Returns to Destroy Coral Near Hawaii, According to Satellite Technology

By Yelena Mandenberg on November 3, 2019

Satellite technology has been helping scientists track the Pacific Ocean Blob since its discovery in 2014. The US National Oceanic and Atmospheric Administration (NOAA) monitoring satellite maps documented the return of this devastating surge of unnaturally warm water that is killing corals and other marine life.

The current Pacific Ocean blob is about five times the size of Alaska.

What scientists refer to as ‘the blob’ is actually an oceanic heatwave. The first time it came up on monitors was in 2014. The NOAA noticed a large spot of red on their infrared maps. In those places, the temperature of the ocean rose by as much as 7 degrees Fahrenheit. It was the first time researchers have ever seen anything like this in the ocean. It was also massive in size: spanning the pacific from Mexico to Alaska.

In the coming year, the burst of warm water was enough to kill off between 50 and 90 percent of corals surrounding Hawaii.

Greg Asner, director of Arizona State University Center for Global Discovery and Conservation Science, based in Hawaii, said, “We were totally unprepared. We were naive as a science community.” Asner’s team tracks coral bleaching events.

The massive form of warm water stuck around for about two years, devastating not only corals but another marine life. The phytoplankton and other microorganisms depend on the colder temperatures to thrive. When they die out, so goes the food chain. The combination of warm water, chemical toxins dumped by companies, and other factors create a toxic algae bloom that effects bottom-feeding shellfish.

California’s once-booming crabbing industry has had to stay closed for weeks and months at a time because the toxic levels in the water produce bacteria in the animals they fish for. In 2015, Nat Geo reported the worst closure yet – it lasted several months and cost the industry over $48.5 million.

So far, we don’t know how long this particular blob will last. “If the weather patterns that led to its development change all of the sudden and we get some cold snaps and storms, then it could dissipate pretty quickly,” said Stephanie Moore, a NOAA research oceanographer at the Northwest Fisheries Science Center in Seattle.

The satellite system used to track these blobs has grown to be more impressive over the years. There’s a system of more than 40 satellites operated by Earth-imaging company Planet that detect hue changes in the sea floor. Mapping resources including in-depth underwater photos also make it easier for scientists to survey the damage done after these blobs.

The current blob is much smaller than the one previously recorded, but we don’t know how long it will stick around or what damage it can do. Last time this happened, there was a remarkable die-off of whales and sea lions, and the warmer temperatures allowed species that have never been seen before to travel to the north – all of this creates a disruption in the ecosystem.

Scientists will continue to track the damage. As these types of events occur more often, satellite and drone companies will create more sophisticated equipment to combat these effects.