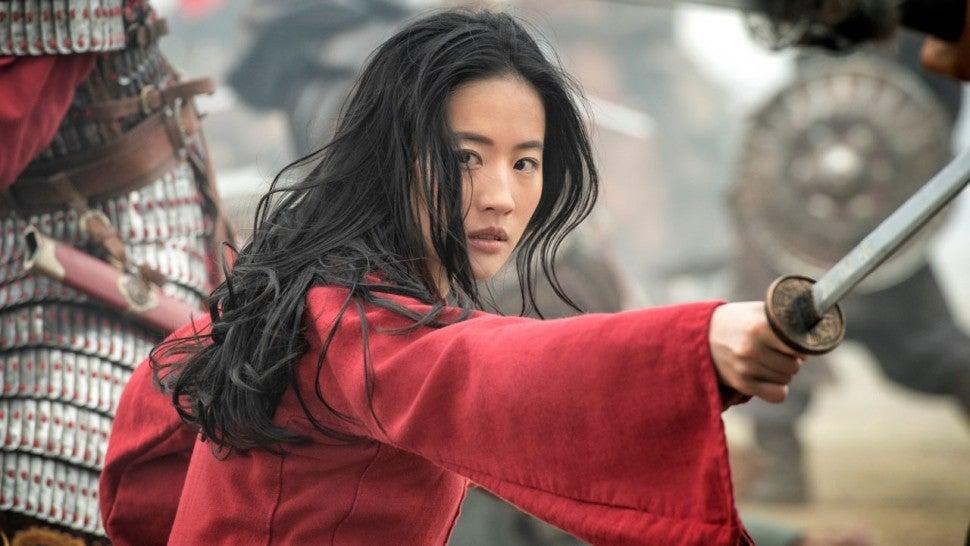 While it’s no secret that Disney’s live-action remakes are often less than spectacular, the company’s latest live-action is garnering more than just negative reviews as the film wraps itself up in current events. Controversy surrounding Mulan involves both the violent suppression of the Uyghur Muslim population and its leading actresses’ support of China over the political uprising in Hong Kong. The film, which has already suffered in the wake of the theater shutdowns as a result of the coronavirus crisis, is now facing wider controversy after a call on social media for a Mulan boycott has would-be viewers second-guessing the $30 price tag to stream it from home on Disney Plus.

Not long after Mulan was released on Disney Plus, viewers started to notice the end-credit special thank you that Disney issued to the “Publicity Department of CPC Xinjiang Uyghur Autonomous Region Committee.” The department serves a propaganda machine dedicated to shaping public opinion on the treatment of Uyghur people, an ethnic minority prominent in the Xinjiang region, where they’re recognized as a native population by many, but not the Chinese Communist Party. The CCP both rejects that the Uyghur people are an indigenous group and has forced an estimated 1.9 million Uyghur’s and other Turkic Muslim minorities into re-education camps over the last several years.

The Uyghur ethnic minority is a primarily Muslim community, and the Chinese Communist Party has forced them into these camps as part of an ongoing war called the “Peoples War on Terror.” The concept of a “People’s War” is a war strategy developed by former Chinese leader, Mao, as a way of maintaining a positive public opinion on war by claiming to act in favor of the people. The CCP’s People’s War on Terror is labeled as a preventative approach to extremist attacks and was introduced in 2014. Many Uyghur’s have reported that the re-education camps serve as concentration or indoctrination camps aimed at providing cheap labor and forced assimilation into Han Chinese culture, the predominating culture known throughout China.

Disney, which filmed parts of Mulan in the Xinjiang region in North-Western China, worked with the the Publicity Department of CPC Xinjiang Uyghur Autonomous Region Committee and another organization called the Turpan Bureau of Public Security. Disney likely worked with the two organizations to be able to film in the region, though it is unconfirmed. The Bureau of Public Security has been specifically targeted by the US Government for its violation of human rights in the region. In 2019 the Bureau was hit with specific sanctions by the United States for alleged human rights abuses.

Beyond Disney’s involvement with controversial government organizations in Xinjiang, the film’s leading actress has garnered heavy criticism for her outspoken support of the police during the 2019 Hong Kong protests. The protests, which sparked in mid-2019, signaled a strong disapproval of a controversial extradition law that would allow China to extradite criminals from Hong Kong to China. Hong Kong operates as a sovereign city-state to China called a Special Administrative Region, but is still subject to China’s rule. The new extradition law would mean that freedoms granted to citizens of the democratic Hong Kong would no longer apply if they were extradited into communist China, leaving the Chinese Communist Party free to prosecute Hong Kongers for things like exercising free speech.

The protests quickly turned into police riots with the police acting in favor of mainland China and the Chinese Communist Party. Hong Kong protesters soon set a precedent for different protest techniques that were quickly used around the world, including the 2020 Black Lives Matter protests in the United States. Mulan‘s lead actress, Liu Yifei, made comments in support of the police amid the Hong Kong protests in 2019. The actress wrote on Weibo, China’s predominating social networking site, that she supported China and the Hong Kong police in the protests.” I also support Hong Kong police. You can beat me up now,” wrote Liu on Weibo. “What a shame for Hong Kong.

Disney’s Mulan cost the company $200 million to produce, but has only earned about $7.3 million since it was released on Disney Plus on September 4.

Published in Brands, Disney and News