Four Decades of Gaming Later, Here’s What You Didn’t Know About Intellivision’s Technology

From Console Wars to Family Gaming Together Jump into your favorite time machine of choice and rewind to December 1979 for the launch Intellivision by Mattel Electronics. Intellivision pioneered many “firsts” in gaming and play however, over the past forty years, times changed, technology changed and how families play together changed. In celebration of four […]

From Console Wars to Family Gaming Together

Jump into your favorite time machine of choice and rewind to December 1979 for the launch Intellivision by Mattel Electronics. Intellivision pioneered many “firsts” in gaming and play however, over the past forty years, times changed, technology changed and how families play together changed.

In celebration of four decades of gaming and innovation we will explore the evolution of Intellivision from the first Console Wars, evolving gaming innovation and uncovering what the near future holds for family gaming together.

In December 1979 – 40 years ago the very first Intellivision video game console hit store shelves. Following the Atari 2600 which launched in 1977, Intellivision threw down the gauntlet and the first console wars began.

Advertisements battled and boasted comparisons, showcasing sports games, space games, voice technology, improved graphics and more. Some of the most memorable ads featured George Plimpton, the voice of Mattel’s Intellivision where Plimpton would showcase side-by-side game play of the Atari 2600 and Intellivision.

Atari won on price and game selection with a library of over 565 games vs. 152 games available on Intellivision. The best graphics, sound and technology hands down goes to Intellivision. It didn’t matter if you were an Atari gamer or an Intellivision gamer, home console gaming was in its infancy to becoming an imprint on play, gaming and culture.

More Than a Gaming Console

Beyond the console wars, Intellivision was more than a gaming console, it was a portal to the future of immersive entertainment and computing ranging from financial management, fitness, learning and gaming. Who knew that you could get fit with the Godfather of Modern Fitness, Jack LaLanne on your console?

Before phone apps were available in the late 1970’s, an Intellivision console was one of the very few ways these services could be accessed.

After scouring their archives, Intellivision Entertainment recently provided a never-before-seen promo video, with a glimpse into how ahead of their time they were, back in the late 1970’s.

This video also shows some of the products that were never released:

People may not know that Intellivision created and pioneered many “firsts” in the game industry, including the first directional pad on a controller (d-pad), Intellivision’s unique controller featured the first alternative to the typical joystick on a home console – a rotating circular pad that allowed for 16 directions of movement by pressing it with the thumb (similar to the iPod that launched back in 2001).

Intellivision was the first console to:

They were pioneers, ahead of their time.

By the early 1980’s, Intellivision owned 20% of the home console market, generating over $500 million in yearly revenue, with over 1,800 employees worldwide.

Fast forward to today, Intellivision intends on keeping their legacy of innovation alive, with the release of the brand new Intellivision Amico™, a family gaming system due to launch on 10-10-2020.

In the late 1970’s most households only had one TV, that meant that gaming was truly family entertainment, centered around one device. Some of our fondest memories are from being gathered around the TV in the living room to play video games together.

Having laughs, challenging each other, exploring new levels, watching, playing and having fun no matter what your skill level.

Over the years different genres of gaming evolved along with technology, gaming became more isolating, but exactly why?

Was it because games became more complicated and competitive, requiring players to concentrate more?

Or was it because as they became more complicated, parents gave up trying to stay involved?

It wasn’t until the Nintendo Wii that multigenerational gaming had a renaissance, from age five to 95, players all gathered around the Wii for family gaming fun.

After the Nintendo Wii had come and gone, there hasn’t been the same family gaming gathering experience since.

Nowadays, kids and parents have to “take turns” to play some games, (like Fortnite or Overwatch) unless each family member has their own console, which is not financially possible for most. Two-player games do also still exist, however there are very few games that allow for more than two players to physically play in the same room together. So how does a family of four play together any more?

There is the same challenge when it comes to mobile games like Tank Stars, Archero or Wild Beyond. All excellent games, however players also have to “take turns” to play. Minecraft comes close, if all of your friends bring their own tablet or mobile they can play Minecraft together in the same room.

Intellivision Amico is exciting because it is focused on bringing family, friends and generations back together in a room. Up to eight players can play together at the same time around just one console.

“At Intellivision, our mission is to use technology to bring family and friends back together by delivering simple, affordable, family-focused entertainment to everyone.”

The Intellivision Amico system will launch on 10-10-2020. It will include two controllers, five games and retail for under $200.00. Games will also be affordable ranging from $2.99-$9.99. Intellivision has thoughtfully designed every game on Amico, to encourage group participation and teamwork through “couch co-op” style gameplay, with single and multiplayer mode options.

“One of the foundational Intellivision principles is group play. We want to be the best in the world at creating engaging group play experiences. And when we say group play, we mean actual engagement with other human beings – not just online.”

Every game on Amico will be rated E for Everyone or E10+. It will offer games that have no graphic violence or blood, bad language, or sexual content, but will have easy-to-use, positive-reinforcement parental controls. Intellivision Amico will offer a plethora of original titles, retro, party, educational, and table games, so there is fun for everyone.

In anticipation of the Intellivision Amico launch on 10-10-2020, Intellivision is giving us a sneak peek as to what to expect, with their new app Amico Club available on the Apple App Store and Google Play Store.

The Amico Club app allows players to point the app at any new Amico logo to see the logo come to life in AR followed a short full screen game demo of Moon Patrol: The Milky Way Chronicles, a new and exclusive reimagining of the Moon Patrol game originally released in 1982 by Irem featured on the Atari 2600.

“We are currently exploring AR as one of the tools to enhance engagement. Voice based engagement is another capability we are exploring,” stated Richards.

Intellivision is working to create additional extended play experiences beyond the Intellivision console as they get closer to their launch date, we can expect to see more sophisticated and fun augmented reality experiences.

Once rivals in the Console Wars, Intellivision is now gloriously revamping classic retro games like Moon Patrol and Breakout previously released for the Atari 2600, and now reimagined for the Intellivision Amico with more to be announced.

Looking Ahead to the Future

Intellivision was ahead of their time in 1979, pioneering many firsts for gaming, from the first Console Wars to getting families gaming together, and play experiences beyond the console. What with the future hold for Intellivision Amico?

If you want to know what the near future holds for Intellivision, download their new app Amico Club available on the Apple App Store and Google Play Store. 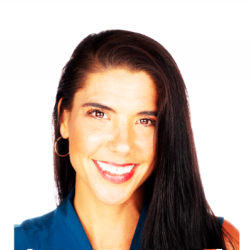 Valerie Vacante is a technology contributor at Grit Daily. She focuses on today's connected world of entertainment, play, living and learning. She has pioneered award-winning products and experiences across IoT, AR, VR, Voice and beyond. She is also the founder of Collabsco, a strategy and innovation firm based in Austin, Texas. Valerie has been named as one of the “Top 25 Women in Technology,” by PCR magazine, where she on the SXSW Innovation Advisory Board, as a CES KAPi Awards Judge, a Global Expert to MassChallenge, industry analyst and international speaker. She is the co-founder of TechUp, a curated service that showcases innovative products on a global stage, and has been featured at WIRED Live, WIRED Next Generation, CES, and SXSW.