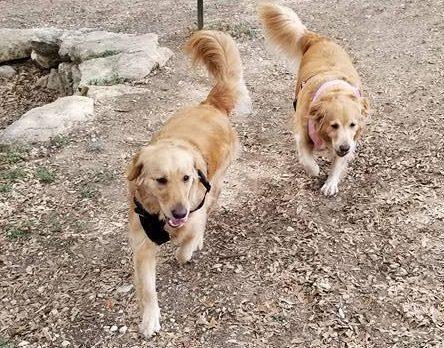 Every night Tricha Sauce and her husband lie awake wondering and worrying where their two beloved golden retrievers could possibly be.

Every day they walk the San Antonio, Texas neighborhood where the dogs disappeared, searching and posting fliers.

It’s been a painful, heartbreaking and maddening four months for the Sauces. They are begging for help from anyone who may know the whereabouts of Acoria and Ripley.

The couple told Grit Daily they used the Rover app to hire a pet sitter to watch their dogs in June. Then they received a shocking call from the dog sitter four days into their vacation.

“She said that she lost Acoria and Ripley. That she was walking them for a bedtime potty break and they got spooked by something, lunged and she dropped the leashes out of her hand,” Tricha Sauce said. “She looked and called for them and they didn’t come.”

The couple flew home immediately to launch an all-out search for their dogs. They reported the situation to Rover.

Sauce said the company printed lost dog flyers, made calls, asked some nearby sitters to help look for the dogs, and offered a $100 reward.  “They told us they may reimburse us for some vet bills or will offer us the worth of the dogs if they are found dead,” she said.

But the family just wants their dogs back. “The limbo of not knowing if they’re okay or not is soul-crushing,” Sauce said. “We miss them every day. I can even close my eyes and imagine what it feels like to hug them or kiss their snouts.”

“This type of experience is very rare on our platform. In this instance, we posted in online dog finding platforms (including a service directly connected to veterinarians and pet shelters), provided 400 flyers for posting, engaged 160 local sitters to assist in the search, and offered a reward.”

Grit Daily reported on dozens of other customer complaints it found about the Rover app earlier this year.
In April there were 70 complaints filed with the Better Business Bureau. Now that number has grown to 78. Some complaints are from other pet owners who said Rover sitters they hired also lost their pets.
One report said: “We received a text… stating our dog had “escaped.” That owner alleges the sitter said she would file a missing dog report with the police, but when the owner followed up that was never done.
Rover responded to that owner saying it was saddened to hear of the situation and reminded them that, “Each sitter on Rover is a small business owner that list their services on the platform.”
When Grit Daily asked Rover about the complaints the company wanted to provide some context:

“More than 1.3 million pet owners have used our service to book care, and last year, sitters on our platform spent more than 160 million hours with dogs. Our sitters and walkers are the highest-rated in North America; 97 percent have earned a five-star rating, based on more than two million pet owner reviews.”

It’s been a frustrating and gut-wrenching four months for the Sauce family. They are begging for the public’s help finding Acoria and Ripley.  “Every day we wake up thinking, ‘will this be the day we find the girls?’ We miss them,” Sauce said.

If you have information about the dogs call 210-608-0867. They were last seen in Northern San Antonio.

Published in Brands and Life