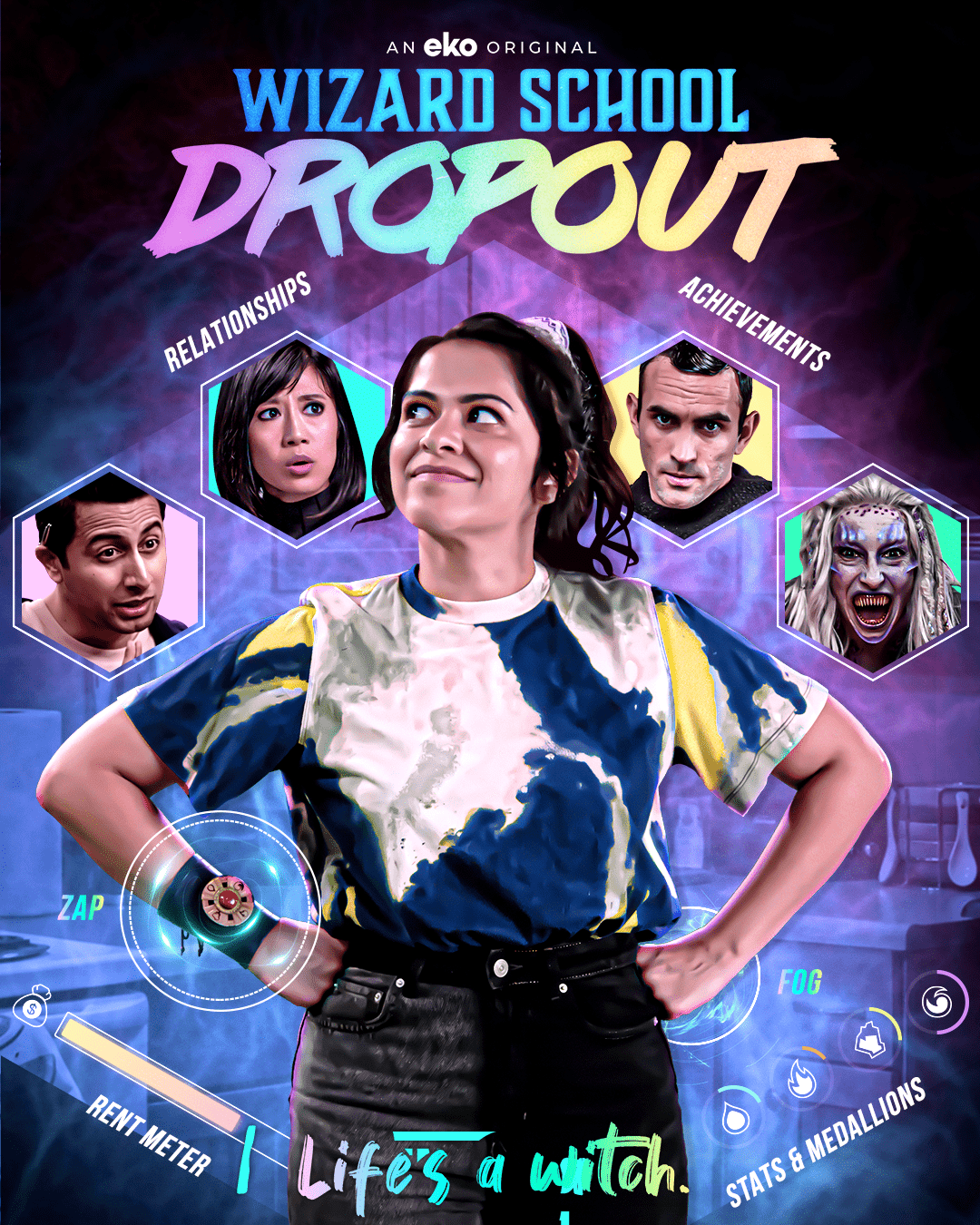 You Can Choose Your Own Magical, Interactive Adventure In this New Comedy Web Series, and It’s ‘EffinFunny’

What good are wizarding powers if they don’t impact your ordinary life? A wizard who struggles to pay rent is, well, just like any other millennial. Mind you, it’s pretty ‘effinfunny!’

Their will doesn’t change their world. And what good is emotionally investing in your favorite screen characters when they make baffling or unbelievable decisions? Your will doesn’t have an impact on their world.

Meet the Most ‘EffinFunny’ Team You’ve Ever Seen

But one entertainment company is bringing worlds together, and these things are about to change. A new web series, “Wizard School Dropout,” lets viewers participate in the comedy, guiding Andy (played by Kosha Patel of White Famous and Girlfriends’ Guide to Divorce) through a world that’s a hilarious mashup of the magical and the mundane.

Andy’s powers aren’t helping her pay rent, but you can help her make decisions, choose her words, and even define her sexual identity. Comedy has never been so magical.

Developed by ‘EffinFunny,’ a small but mighty force at the leading edge of interactive comedy, the web series has partnered with Eko, an online streaming platform that concentrates its powers on interactive media, to help bring the innovative 12-episode series to audiences across the web.

Grit Daily spoke with Sandeep Parikh, the founder of EffinFunny about why this is such a better way of bringing the “choose your own adventure” to the big screen.

“Comedy is so different now than it was even ten years ago,” Parikh told me.

The director of Wizard School Dropout even jumped in, emphasizing that “as technology develops and people consume entertainment differently, the boundaries of storytelling formats [begin to] fall away.”

And it won’t make you stress eat or plunge into nightmare mazes like Netflix’s Black Mirror: Bandersnatch. Unlike this hellish “adventure,” EffinFunny takes a lighter approach, aiming for the kind of content people go for to lift their spirits after a hard day at work.

But that doesn’t mean there isn’t some serious value and life-lessons to walk away with.

“One of our primary motivators here,” according to Parikh, “is to prioritize a positive representation of nonwhite and LGBTQ+ people, both in front of the camera and behind the scenes.”

Positive Representation From the Writers’ Room to the Stars

So why does a series like this already stand out in comparison to the voluminous amount of web-based video content out there?

The stars and most of the cast of “Wizard School Dropout” are people of color, representing various ethnicities.

But, this in itself isn’t enough, Parikh interjected.

“We aren’t interested in tokenized roles,” he explained to me. “We want stories that accurately reflect our world, from our points of view, even if they take place in a fantastical reality.”

And for EffinFunny, ethnic representation starts in the writer’s room. I also had the chance to speak with Anand Shah, the Head of Development at EffinFunny, where he underscored the value of this type of representation.

“Representation has been a really important thread in this series, as well as our other projects,” Shah said. “Working with projects that reflect the entire spectrum of voices drives us as creators. Executing them with those who share our vision is a truly rewarding experience.”

But how does this type of storytelling differ from traditional plotlines?

In an interactive series such as this, or even in Bandersnatch, the storyline must work intricately, because there are multiple possible directions and outcomes for the characters.

As for the EffinFunny team, it had to master a high level of storytelling competence to ensure that each potential reality would become a compelling and fully-realized one.

Of course, you add in the user interface effects (UI FX), like buttons for different options. So, in addition to highly competent storytelling, you need to have the right equipment and technology (not the shitty, half-assed gear) mirror and match the camerawork as well as the platform.

Bringing all these things together for an engaging journey from the audience’s perspective takes a competent and multidisciplinary approach indeed. But first and foremost, Parikh says, he and his team are comedians.

As for the EffinFunny team, it started as a comedy show which supported local Los Angeles startups and up-and-comers. Most importantly, it supported comedians of color, in low lit, basement venues.

Last year’s “That Moment When,” which also appears on Eko, garnered three Telly Awards and took home the Webby Award for Best Use of Interactive Video.

Its Comedy Central series “The Legend of Neil” brought the cable network’s high production standards to the web series format. And major backers have taken notice.

Walmart saw the potential in the interactive format, and the strength of EffinFunny’s previous projects, and invested to include interactive ads in the episodes. The point? Wizard School Dropout is one of only two Eko productions to land such a deal.

When the bingeable show’s 12 episodes run out, we get to rewatch it with different choices and see what turns the story takes.

And Parikh says now that production has wrapped, EffinFunny is already on to more exciting, innovative comedic projects that make the audience part of the hilarity.