The Death of Print Media is Undeniable

By Victoria Loskutova
GRIT  DAILY ®
The Premier Startup News Hub.
Grit Daily News is the premier startup news hub. It is the top news source on Millennial and Gen Z startups — from fashion, tech, influencers, entrepreneurship, and funding.
The Death of Print Media is Undeniable
By Victoria Loskutova

The world has shifted online, thanks to Coronavirus. But COVID-19 has nothing to do with the fact that we’ve stopped reading print media. Most of the publications we enjoy we can find on the web today. Are we witnessing the final death of the printed press? Sir Bob Jones says that “virtually no-one under 30 has […]

The world has shifted online, thanks to Coronavirus. But COVID-19 has nothing to do with the fact that we’ve stopped reading print media. Most of the publications we enjoy we can find on the web today. Are we witnessing the final death of the printed press?

Sir Bob Jones says that “virtually no-one under 30 has so much as held a newspaper, let along read one”. Do you remember when the last time you read a printed magazine or a newspaper was?

“There was a time when we lapped up North and South’s articles about a bearded Waimate potter or Metro’s infantile scuttlebutt, trivia and restaurant ratings rubbish. Those days are over, so too with the Listener’s journalism, which offered the same fare now provided by daily newspapers in the absence of news. These are still hanging on, but not for much longer”, asserts Sir Jones.

According to News Corp Australia, more than a hundred Australian newspapers are in a massive shift to digital. When pandemic hit the economy in April, the media suspended sixty papers. Chief Executive Paul Murphy said they were still waiting for clarity from the company on how much editorial staff will be affected by these changes across the News Corp network.

While digitalization seems logical today, a significant number of employees will lose their jobs. Big changes in the history of printed media leave journalists and readers devastated.

“35 years ago, I started my working life as a cadet in Gippsland. As a country, & then suburban journalist, I worked at newspapers which told the stories the metros would never touch. It’s gutting to see the printers stop working & jobs lost at our community & regional newspapers”, tweeted Darren Chester, the Nationals MP and minister for veteran’s affairs.

While the internet is overloaded with information, every new digital publication must build a strategy to win a piece of the market and readers’ attention. As digital media is divided into several categories such as publishing, podcasts, live streaming, film & TV, etc., it takes more time and effort to understand which ones work best for the target audience. Working with digital media versus printed publications is different in terms of advertising and business potential.

“Two decades have passed since newspapers launched websites, and yet here we are. Big city papers have gone under, thousands of journalists have lost their jobs, and the idea that digital news will eventually become a decent business feels like a rumor. The reality is this: No app, no streamlined website, no “vertical integration,” no social network, no algorithm, no Apple, no Apple Newsstand, no paywall, no soft paywall, no targeted ad, no mobile-first strategy has come close to matching the success of print in revenue or readership. And the most crucial assumption publishers have made about readers, particularly millennials—that they prefer the immediacy of digital—now seems questionable, too”, the special report stated in 2016.

However, the pandemic might cause a full stop in the press’s existence globally.

“Coronavirus is destroying newsprint newspapers across Britain, delivering the coup de grace to businesses that were already in the process of dying.

Local and regional newspaper publishers have found it economically unsustainable to go on producing papers. In response, they have suspended the publication of scores of titles and placed hundreds of journalists on paid leave. “Furloughs” have become part of the new pandemic lexicon,” seen in one of the Guardian’s latest updates on the topic.

There is a significant drop-off in advertisers and widespread closure of the retail stores. The 355-year newsprint history of Great Britain might be unfortunately over too. Publishers, most probably, will not recover from the contagion.

On the contrary, the number of eyeballs online issues gained during these uncertain times increased dramatically. For instance, “traffic to the Financial Times website has grown 250 percent year-on-year over the past month as coverage of the coronavirus crisis has broken new records for the daily title”, as recently reported in PressGazette.

Levels of information consumption and engagement on the internet boomed during the past few months.

The Guardian confirms that a “hunger for online news is undeniable. For the past month, every major publisher has been reporting record numbers of website visits. Page views each day have been off the chart. Dwell time, one of the key metrics to show the depth of reader engagement with individual articles, has increased, too. One result, according to some national publishers that impose charges for online access, has been a rise in subscriptions.”

Online publications have a chance to expand and attract more readers and customers. The smart transition from print to digital today might also bring quicker success to those publishers who have closed their doors due to the pandemic. There is no doubt that 2020 will drastically change the world we live in and teach us a lot in every area of life. Will every change be better for humanity? 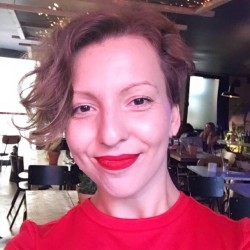 Victoria Loskutova is a Columnist at Grit Daily. She is a journalist and copywriter with a passion for tech, and startups. She stands for equality, diversity and inclusion of female and underrepresented founders, and amplifies women's voices across the globe through her PR work.