People across the country had first-hand exposure to the real-life impacts of climate change this year with record-breaking wildfires and some of the worst air pollution the U.S has ever seen.

According to the World Health Organization (WHO), 91% of the global population is exposed to air that exceeds the maximum levels of ingestible pollution. And the UN’s 2021 “Code Red for Humanity” report made it clear that the effects of climate change will only get worse in coming years.

If they didn’t know it before, consumers are now acutely aware that environmental hazards like air pollution, wildfire smoke, and increased levels of pollen are directly affecting them. Yet, because they often can’t feel, smell or see poor air quality, most people have no idea when the air they’re breathing is compromising their health.

Rather than waiting for governments to make wide-sweeping changes to protect consumers, many companies are looking to environmental data to understand how shifting climate conditions affect their customers’ and users’ wellness.

At the center of all of this is BreezoMeter.

The climate tech company powers the air quality data in the Apple Weather app, and delivers micro-local air quality, pollen, pollutants, and fire data to consumers within 5 meters of their current location. Companies like AstraZeneca, Bosch, Dyson, Volvo, Verizon Media and L’Oréal also look to BreezoMeter to put environmental protections directly into the hands of consumers through the devices they use every day (think mobile apps, smart home IoT devices, cars and connected experiences).

Ran Korber, BreezoMeter’s CEO and Co-Founder, started the company in 2012 while he and his pregnant wife were looking for a home in northern Israel. Korber’s wife is asthmatic and, as an environmental engineer, Korber knew how long-term exposure to air pollution could jeopardize the well-being of his family.

When he asked around about the cleanest areas to live, he discovered that not even his colleagues in the environmental protection agency had an answer. He decided to join forces with his now co-founder and CTO, Emil Fisher, to develop the algorithms that would become the foundation of the climate tech company.

I spoke with Korber about how BreezoMeter is working with companies to tackle this invisible problem in tangible ways.

Grit Daily: Gaining mass adoption is a feat for any company, but BreezoMeter is offering a solution for a problem people don’t even know they have. What have been some of the drivers of adoption of your product?

Ran Korber: We are in an interesting position in that it’s the consumer that ultimately benefits from our work, but we work with companies and brands to reach them. Consumer awareness of the environmental issues that affect them are critical to driving brand adoption of our technology, followed by the subsequent consumer adoption of their devices and products. When the pandemic started, we saw a leap in people’s awareness of airborne toxins’ effects on their respiratory health. This caused a jump in demand from the companies that serve those consumers.

Air pollution ​​kills an estimated seven million people worldwide every year, but most people think they won’t be affected. When multiple studies identified links between exposure to hazardous air pollutants and increased COVID-19 death rates in 2020, people could no longer write off air quality as something that only other people had to be aware of.

There’s also been a heightened awareness of air quality as environmental hazards, like wildfires, become more frequent and hazardous. In 2021, the Northeastern United States reported the worst air quality it has seen in over 15 years. The hazardous air quality was caused by smoke from west coast wildfires that traveled more than 3,000 miles. The severity of past wildfire seasons is linked to climate change. It’s only going to get worse–and so are its impacts on people’s health.

Unlike the weather, you can’t just look out the window and make an educated guess about air quality. You can’t feel, smell or see air pollution, which makes it extremely hard to understand–and avoid. This has driven adoption of our platform. People have become more aware of how harmful air pollution can be and are looking for tools to protect themselves.

Grit Daily: This would explain the information gap when it comes to air quality. How is BreezoMeter providing accurate air quality data, and making it as accessible for consumers as the weather?

Ran Korber: Part of the current gap in air quality data is due to limitations of traditional air quality solutions. Solutions like local governmental sensors don’t cover enough areas or pollutants and share data that’s delayed by hours. Air pollution is fluctuating on an hourly basis and varying from street to street. It’s critical that people have access to air quality data that is hyper local and shared in real-time.

Our approach to air quality reporting allows us to fill in the blind spots between sensors in the event that sensor data doesn’t report on all pollutants–all in real-time.

BreezoMeter uses AI and machine learning to collect real-time data from multiple sources. This includes more than 49,000 sensors worldwide, live traffic information, meteorological data and satellites that track weather, fire, and sandstorm events. Our platform detects 17 species of pollen and 34 different pollutants. This data allows us to forecast air pollution up to 96 hours and allergens three days ahead of time.

All of this enables BreezoMeter to deliver the most accurate air quality resolution and pollen, pollutants and fire data to consumers within 5 meters of their current location, in more than 100 countries.

We power the air quality data in the Apple Weather app and offer environmental data through our app and website. Consumers can check air quality as frequently, and easily, as they check for rain, snow, and sunshine.

Grit Daily: We know that consumers care about air quality, but how are you getting companies to care?

Ran Korber: Companies have to care about air quality because consumers do. People are now more aware than ever before of the harmful pollutants in the air they breathe. They want solutions to help them manage their exposure.

Verizon Media partnered with BreezoMeter for that reason — to deliver Yahoo Weather users access to hourly, location-based air quality data. Users can also receive activity recommendations to stay safe, wherever they are. In today’s environment, companies cannot be the authority in weather without being the authority in environmental data.

Grit Daily: Can you share some more of the early adopters you’ve worked with?

Ran Korber: Breezometer is currently working with Volvo to offer drivers protection from outdoor pollution. The company delivers micro-local environmental intelligence (within 5 meters of the driver) through the vehicle’s human-machine interface (HMI). Passengers can use these real-time updates about their exposure to hazardous air quality to find alternative routes. They can also make informed decisions to decrease their exposure to toxic air, like when to open and close windows.

We also recently announced our partnership with L’Oréal to develop an exclusive beauty-driven Exposome Platform. Specifically, L’Oréal is working with BreezoMeter to better understand how an individual’s environmental exposures over a lifetime relate to beauty, skin and aging.

We’ll see companies’ reliance on environmental intelligence and climate tech continue to grow, especially over the next few years.

Grit Daily: You founded BreezoMeter nearly a decade ago. What are the pivotal moments or decisions that have led you to where you are today?

Ran Korber: In the early years of BreezoMeter, we won a few startup competitions. These were key to our initial growth. BreezoMeter was one of six winners in a UN competition for innovative ideas that can positively impact the world. We were also named Israel’s Most Promising Startup in the 2014 Startup Open competition during Global Entrepreneurship Week. We were later named one of the World’s Top 50 Most Promising Startups by the same organization. And in early 2015, my co-founders and I were among 72 entrepreneurs chosen by President Barack Obama. We were part of a global initiative to help aspiring entrepreneurs in developing countries. These early wins not only offered exposure; they confirmed that there was a critical need in the world for real-time air quality data.

We also made the critical decision to build a multidisciplinary team of scientists, environmentalists, health experts and tech leaders. About half our team has a scientific background, and several of our team members have PhDs. Everyone comes from different backgrounds, which lets us approach innovation with a diversity of thinking. This has allowed us to go far beyond our original dream of democratizing air quality data.

Over the past decade our climate technology has continuously evolved. It started as an algorithm that calculated air quality in the areas where my family was looking for houses. It soon became an app and a map that quantifies pollution. We’re now delivering micro-local air quality, pollen, pollutants, and fire data to consumers through connected devices in 100+ countries.

We’ve worked to provide meaning to data that was once inaccessible and not easily understood to the masses. Today we’re making it as easy as possible for businesses and users to act on that data. This is the next step in democratizing air quality data and improving the health of millions. 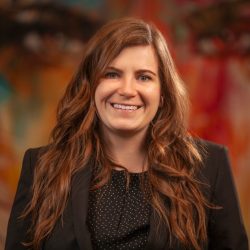 Zoe Ashbridge is a contributor at Grit Daily. She's spent the last ten years working in and writing about technology, digital marketing, SEO, ecommerce and entrepreneurship.