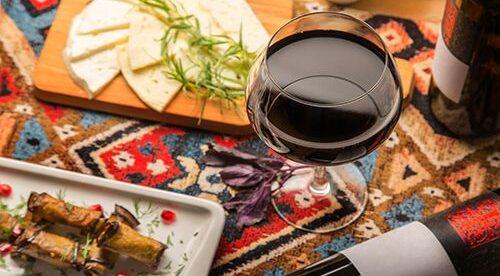 You don’t have to know much about wine to know that some of the best come from France, Italy, California, Argentina, Spain, Australia, and New Zealand. But you might be surprised to know that more than 60 countries produce wine, including places you might not suspect, such as India, Morocco, and Syria. Let’s take a tour to six overlooked wine regions.

A lot of that wine… not so great, really (just like a lot of wine from the U.S., Italy, Spain, France, and elsewhere). Some of it, however, well it’s spectacular and surprisingly so.

Which means that if you have a fairly decent wine-specialty shop nearby (or you order from a wine merchant online) you can find some amazing vino at great prices from countries you might never have considered. So, consider this a brief tour of some of the more-unlikely, under-appreciated wine destinations you should try out.

Yes, yes—you probably know Argentina already, particularly if you order a Malbec at wine bars and restaurants. A great majority of the country’s best-known Malbec come from Mendoza, the Napa of the Andes in west-central Argentina, and a name you have no doubt heard or seen on wine menus.

But about 800 miles north lies the relatively unheralded province of Salta near Argentina’s border with Bolivia. It’s home to a small but top-quality collection of vineyards producing excellent Malbecs, as well as two unique varietals known as Tannat (a plummy red) and Torrontés (a richly floral white).

Salta wines tend to be more challenging to find because Mendoza is the country’s 800-pound, wine-making gorilla, so those bottles pop up everywhere from gas-station mini-marts (low quality) to restaurant wine menus (high quality). But if you can find Malbecs from Salta at your local wine store or online, they’re worth the effort and you won’t be disappointed.

Look for names such as Bodega Colomé and, especially, Bodega El Porvenir de Cafayate (from a quaint, little Andean valley town of just a few streets). In particular, El Porvenir’s “Laborum” is a fantastic Malbec that would easily fetch $75 to $100 per bottle if it came dressed in a Napa label.

This is an “in the know” wine destination. Uruguay is a nubbin of land wedged between Argentina and Brazil and it produces some exceptional wines, particularly Tannat, the national varietal.

Uruguayan Tannats are regularly winning or placing in global wine competitions because of their quality. Moreover, the uber-modern Bodega Garzón winery earned acclaim as New World Winery of the Year in 2018, and has become a must-visit destination on Uruguayan wine-tour itineraries.

Uruguayan wines are big, robust, tannic, and fruity because they have to compete with the big, bold flavors of Uruguay’s culinary culture tied to a love affair with grilled meats (one of the world’s major cattle countries) and grilled seafood. Along with Garzón, look for Los Nadies, Alto De La Ballena, and Pisano RPF.

And for a real treat, find a Licor de Tannat, a sweet dessert wine great for sipping. Look for Familia Deicas and La Estancia Reserva Familiar.

Country not state. There’s lots of debate on where wine actually began, and one side of that argument holds—with strong proof—that it began in the Caucasus, in Georgia, some 8,000 years ago, when locals fermented wine underground in large, clay barrels.

Today, the tiny, former Soviet state on the eastern shore of the Black Sea produces some excellent, high-quality, low-cost wines that compete well on the world stage. Georgia is home to more than 500 wine-grape varietals, and some of the wines—some very good wines, actually— are still made the original way, buried in those clay jars. These are known as qvevri wines and they come in both red and white varieties, though the whites tend to be amber in color and with a flavor profile so unique that some say it’s not really a traditional white but its own, separate classification.

Georgian wines are certainly not the easiest bottles to find, but they’re out there, particularly at online wine retailers and at high-end wines shops in major markets along the east and west coasts.

Names to look for are Orgo, Chateau Mukhrani, and Alaverdis (from a 9th-century Georgian monastery). Just be warned that the Georgian alphabet is tricky, so you might want to look online for the wines you want instead of trying to decipher labels in a wine shop.

But Germany also produces other fabulous and often-overlooked varietals such as Müller-Thurgau, a light, summery white that’s best when young and which could easily replace your Chardonnay or Pinot Grigio while hanging out by the pool or on the beach.

Look for names such as Salwey, J.B. Becker, and Wachstetter in Spätburgunder; Enderle & Moll or Rudolf Fürst in Müller-Thurgau; and Joh. Jos. Prum Wehlener Sonnenuhr and Egon Müller Scharzhofberger in Riesling. (Note: You’ll find lots of good Müller-Thurgau coming from northern Italy and Switzerland, and lots of very good Riesling coming out of France’s northeastern Alsace region along the German/Swiss border.)

This is another of those countries that could possibly lay claim to the title “Birthplace of Wine.”

The Biblical story of Jesus turning water into wine is supposed to have occurred in Qana, in what is today part of southern Lebanon. Moreover, the country’s viticultural history supposedly includes exporting wine-making technology and equipment to Italy and Spain thousands of years ago.

But because of its war-torn history and the neighborhood it lives in, Lebanon is one of the most overlooked wine-making countries. Nevertheless, Lebanon’s tiny winemaking industry (California produces in four days what Lebanon produces in a year) is fermenting some big, jammy, flavorful, well-crafted wines that hold up against high-end bottles from California, Italy, and France. The only difference: Lebanese wines are 50% to 70% cheaper, meaning that $75 bottle of cult California Cabernet Sauvignon is typically $25 or less when carrying a Lebanese label.

Wines to look for include Marsyas, Ixsir (particularly its “El Ixsir” bottling), Chateau Kefraya, and Ksara.

Last year, at the Concurs Mondial de Bruxelles, one of the world’s premier wine competitions, Mexico landed among the top 10 countries bringing home the most medals for wine. Mexico! The land of tequila—39 award-winning wineries.

The reality is that Mexico has a grape-growing climate, not unlike parts of California. As a result, Mexican vineyards are producing multi-award-winning reds, whites, rosés, and sparkling wines from diverse terroir stretching across the northern half of the country, from Baja California to the Texas border to just north of Mexico City.

As with Lebanon and Uruguay, Mexican tend to be big wines that pair well with the country’s big culinary flavors.

The Mexican wines you want to look for include Vino de la Reina, Vinos El Cielo, and Roganto.

So next time you go shopping for wine, resist that inclination to grab the same old standby bottle of average wine. Expand your geographical palate and test some of these wines from regions you’ve never thought to try. You might just be surprised at how good—and how affordable— wine can be from a place like Georgia or Mexico.

Related: Happy Glamping in the Mountains of Mexico