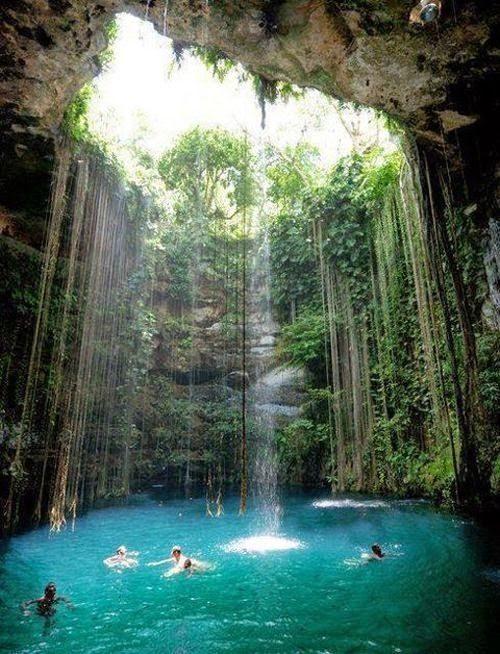 It was one of the last cities built and inhabited by the Maya. These coastal ruins are some of the most well preserved sites ever found, sitting above a 12-meter cliff overlooking the Caribbean sea. What you will find now is a mellow, bohemian-chic stretch of intimate boutique hotels with private beaches that could easily become your new favorite (and relatively inexpensive) place to vacation.

As the sun sets into a grapefruit pink sky, walking along Tulum’s pristine white sand beaches is a surefire way to recharge and return home inspired. Perhaps the next evening you’ll bike alongside the jungle on the main beachside road, sprinkled by torchlit-gourmet restaurants with chandeliers hung from tree branches. Venture a bit further and you’ll find more lively spots with cheap, delicious tacos and live music. The intoxicating scent of copal incense, a Mayan herb used for healing purposes, wafts throughout this beachside stretch of town.

Tulum sits along the Yucatán Peninsula, which is one large, porous limestone shelf with no visible rivers. Instead, a network of underground caves have formed beneath the surface. The entrance to these crystal clear freshwater caves are called cenotes – which hold sacred significance to the ancient Mayan civilization. Some cenotes were their main water source, while others were used for sacrifice. Offerings were thrown into these pools as a portal to communicate with their gods and ancestors. There are well over 6,000 cenotes in the Riviera Maya.

Actually, in January 2018, just a stone’s throw from Tulum, two of these very cenotes, the Dos Ojos and Sac Atun cave systems, were discovered to be connected, forming the world’s largest underwater cave system (215 miles long). Not only does this flooded cave system hold an important massive freshwater reserve, but hundreds of Mayan archaeological sites have been discovered within its depths, including evidence of America’s first settlers, Mayan cultural artifacts, and the remains of long-extinct animals.

Our favorites were the Cenotes Tamkach-Ha, Choo-Ha, and Multum-Ha. These three incredible underground cenotes situated on the same property are lesser-known, removed from the main tourist paths, and hardly mentioned in most travel guidebooks. They are also within a ten-minute drive from the Mayan Ruins of Coba, which are 45 minutes from Tulum.

After hours of diligent research, we found NEST Tulum, a breathtaking property with four separate structures, which include intimate jungle and garden rooms, tower rooms, and unique ocean-view lofts. Upon walking up the firelit path to the tower ocean-view loft, utterly speechless, we ascended the stairs to the most breathtaking room I’ve had the pleasure to occupy to this day. The amazing staff, meals, and recommendations for tour companies and adventures at NEST were world class.

Don’t leave for your trip without doing your research on Sargassum; approximately one month per year the white sand beaches are covered with seaweed, rendering them unswimmable.

Check that your hotel has good Wi-Fi for the area (NEST Tulum), and plan ahead for a shuttle service or rent a car. Be cautious of taxi drivers by getting quotes beforehand and knowing the currency conversion.

Make sure you bring a headlamp when you’re biking along the main road! Certain stretches can be dark.