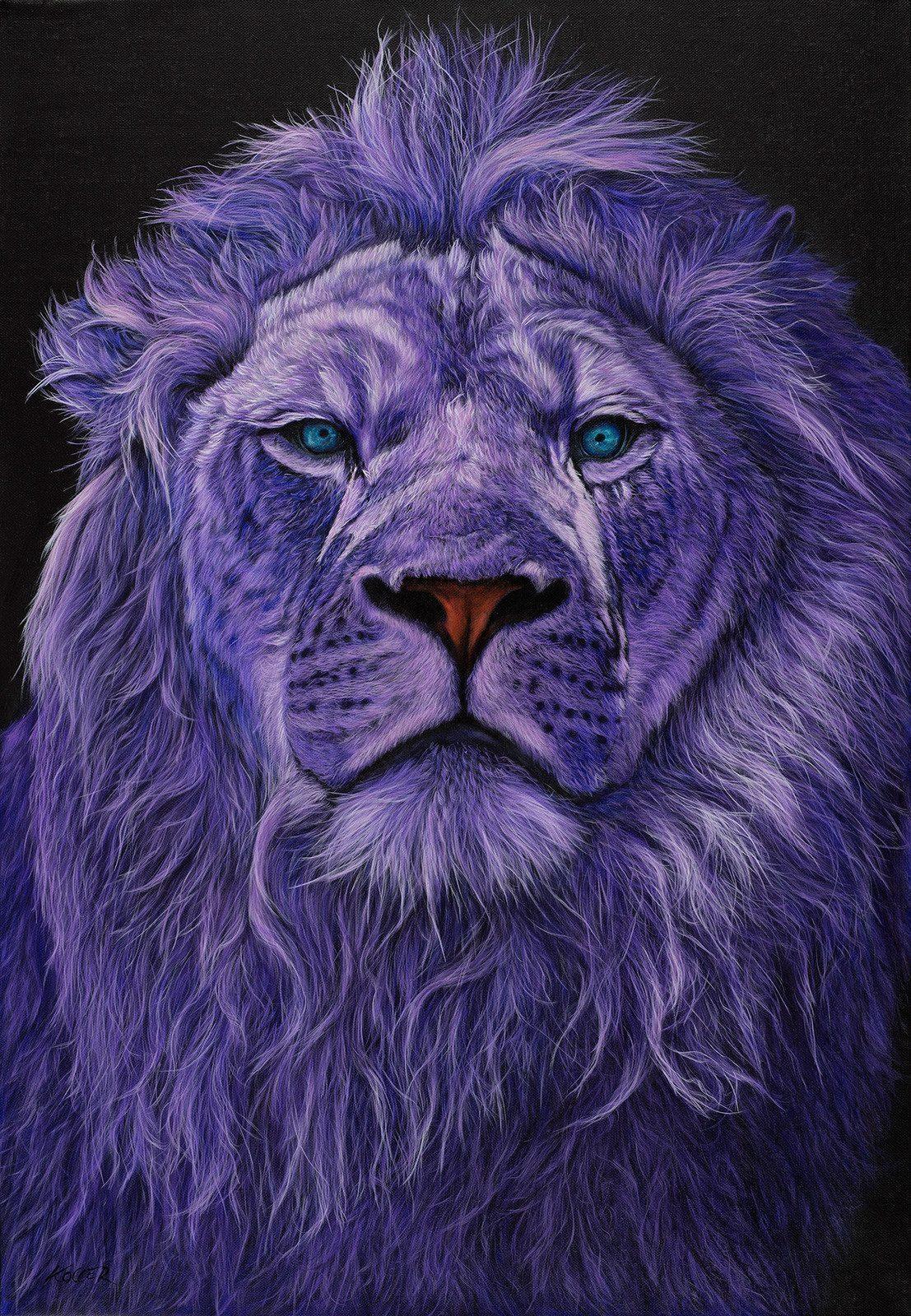 The Internet is wild for Helmut Koller’s vivid animal portraits

Tigers don a shade of orange. Perhaps a shade of white in their rarest form.

Bison? Those lead with brown, black, and sometimes a red.

That narrow color band is just how animals come, right? Not according to Florida-based Helmut Koller. The dude with a cool name — he’s Austrian born — who’s part Big Lebowski with a dash of Christoph Waltz, doesn’t hold back when it comes to animal colors. In an exclusive story for Grit Daily, Koller says he’s always fascinated by the power of a camera combined with human ingenuity.

As for his art? Heed Koller’s warning: Don’t let aesthetics fool you.

Grit Daily: For the uninitiated, what got you to paint and photograph?

Helmut Koller: My father wanted me to become an electrical engineer. He saw me quite frequently take apart old radios and so he thought I was technically gifted. Never realizing as I put them back together again, I was always left with extra parts.

He was a hobby photographer with a rather good camera. I was fascinated that you could create something with that gadget. So the day I was supposed to go off and study what electrical engineers do, I refused to get out of bed. It was the very first time I refused my father. To say the least, he wasn’t pleased for a very long time. Since I didn’t grow up with art I thought photography was the only halfway creative thing to do. Years later, I lived in Vienna where I had many artist friends all of whom I admired. However most of them disappointed me and it was quite amazing to later find in myself everything I had admired in them.

GD: Some of the animals you create — tigers, for example — aren’t native to Austria. Where does that inspiration come from?

HK: There is quite a lot inspiration coming from the animals themselves. It’s stunning how such beautiful creatures can be so deadly. Being in their presence does something to you. They are sentient beings, they have a knowledge, they know how to survive. When you look into their eyes there’s someone at home.

GD: Which elements of Austria or Central Europe are in your work?

HK: It is in Vienna, Austria, where my artist soul is at home. I always say, with a big smile, that it was Egon Schiele’s (1890-1918) fault. He took me away from photography. But the creative journey of finding yourself, as an artist, of developing your own, unique style, is  a very long one.

Though I am shaped by Egon Schiele and Gustav Klimt, Strauss and Mozart, I agree, that those traces, are no longer visible. But believe me, they still inspire me and will always be in my heart.

GD: You offer up that “disciples need not apply” as your “tag line.” What’s behind that slogan?

HK: I have always struggled to explain my paintings. Pop art would really have been the easy answer, but I disagree with its basic concept. The Pop of the sixties saw itself as a counter culture, but I am of a different generation and cultural background. I feel closer to the Wiener Sezession and the artists of the Renaissance.

Understanding that my works are unique, but still Pop art in a wider sense I set out to create and name my own movement; fully content of being its only member. New Pop, I thought, would described it best.

Of course, I found it necessary to google “New Pop.” To my surprise I found somebody who had defined my kind of Pop.

“The new Pop is different. It wears its social membership on its sleeve, insisting on the centrality of its niche,” wrote Christopher Knight, art critic of the Los Angeles Times, in an article on December 24, 2006, titled: “The new pop is everywhere you look.”

He further stated: “The new Pop is not a style or a movement, as it was in the 1960s. It’s a Zeitgeist, the spirit of the 21st century. Today’s art operates as a distinctive niche within the larger sphere of popular entertainment. Contained by that bigger universe, which I think of as the Cultural Industrial Complex, art ranks among the liveliest, most resonant galaxies.”

Mr. Knight points out, that: “Popular culture used to be synonymous with mass culture, but now it’s a vast niche society.”

My paintings are built upon the classical color harmony. Many of my canvases are sized in the golden ratio. My bow before the great Renaissance masters. Todays view, that art is judged by the circumstance of its creation is one I do not agree with.

HK: Kollerism is defined by the realistic representation of the form and the abstraction of colors. After leaving photography behind and beginning to paint, I realized that I do love the realism of the form. But since I neither do windows nor realism, I needed another element in my paintings. Painting things as they are, would bore me. It was quite a long journey through different styles before I arrived at this point. It’s a unique development, I fully realize for most artists who start realistic and then move to abstract.

GD: Some of the bold colors you use are atypical to the subject. For example, big cats aren’t usually green and bison aren’t usually blue. What drives those color schemes?

HK: I see my paintings as iconic portraits of sentient beings, supreme beauties without a reference of time and space. They are esoteric manipulations of nature, vehicles for exercises in classical color harmony, visual games. It could be just as well done with nudes, which is, by the way, how I’ve started. But the elements of of spots, stripes, textures, like furs and feathers fascinates me and are a technical challenge.

Do not let the aesthetics fool you. These paintings are powerful symbols for not agreeing with how things are. Most artists, whether they are aware of it or not, dream of a better world. This series is such a dream. Look at our food chain, eat or be eaten! Look how most people treat other people. One could think, you can only do well, when you suppress or destroy the other. I just don’t agree with it. In a more perfect world, you wouldn’t need to camouflage, to easier kill your pray, to increase your chances of survival.

It is really not so important to know, how I explain my paintings, but it is most important, that whoever looks at them, has their own way of explaining or understanding them. Only that makes these paintings into works of art.

At the very beginning of the series, I briefly referred to it, as gods coloring book, but at the end, I found it a bit obnoxious.

GD: Where can our audience next see your exhibition?

HK: In September, we exhibit at three art fairs. At the beginning of September, I’m at an art fair in Monte Carlo and later that month, two art fairs in Russia. One in Moscow, the other one in Sochi. The next one man show, this year, is planed in December in San Francisco, at “Gallery Four Forty Four.”