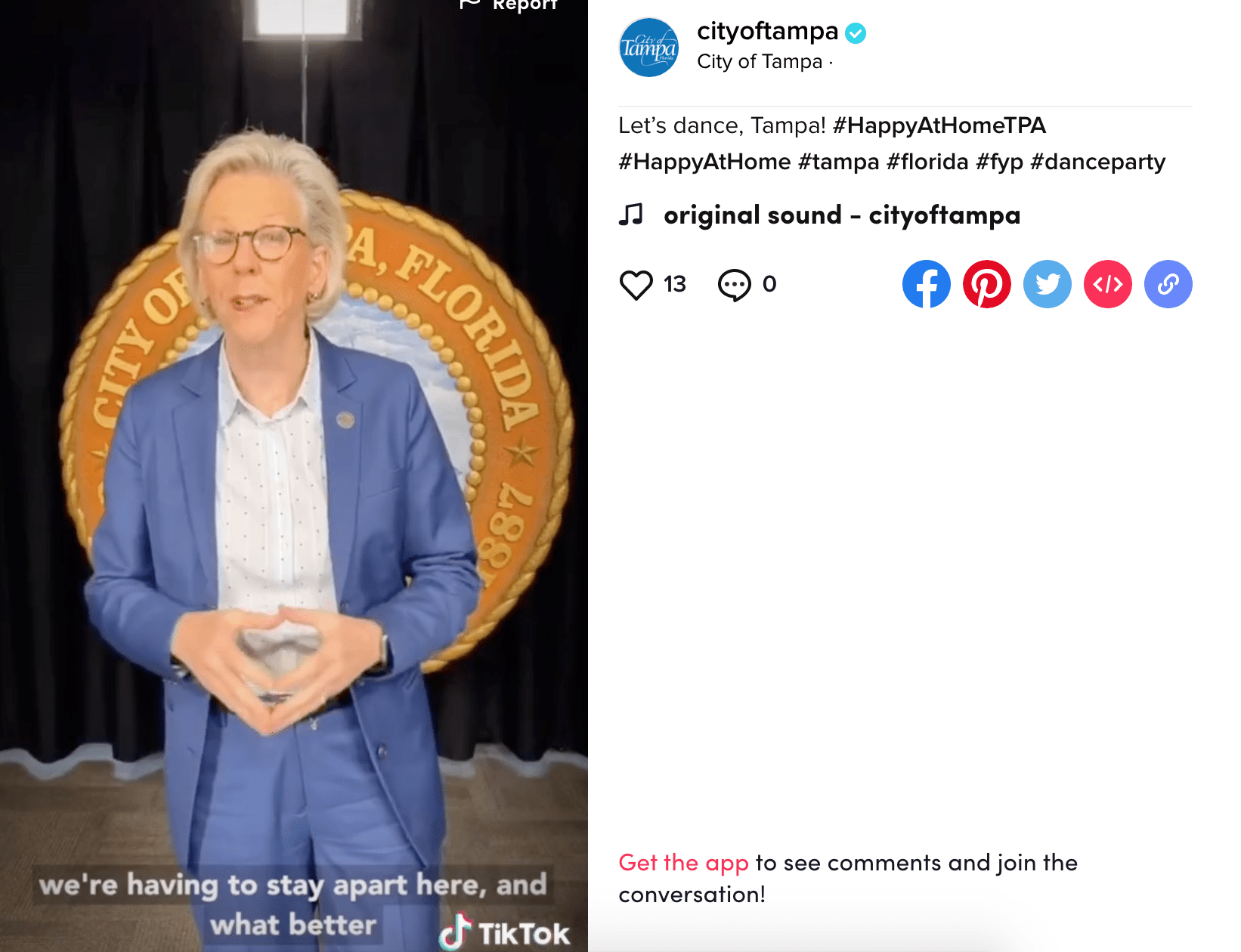 Politicians are often seen as unreachable—from a different tier of society than the layperson, but Tampa Mayor Jane Castor is shattering that view. With her matter-of-fact approach, delivered with a signature southern twang, she resonates with the residents of her city. That may be why her coronavirus response approval rating is at 78%, according to a University of North Florida study, higher than any other major city mayor in the state; it even exceeds Florida Governor Ron DeSantis’ score.

The coronavirus outbreak is testing leaders all over the world.

Their constituents now have the time to watch them closely, as millions have been ordered to hunker down at home. In a moment when so many mixed messages are coming from the federal government, Mayor Castor is meeting Tampanians on their level, using Tiktok videos to educate people about hand washing and social distancing. She issued a “Safer at Home” instead of a “Stay at Home” order, understanding that residents may not have responded well to the commanding nature of the latter phrase.

The news is full of COVID-overload: record breaking death tolls, lack of PPE for frontline healthcare workers, states competing for ventilators, etc. so it’s a respite for people to see a competent leader enforcing common sense measures and keeping her constituents informed about the reality of the situation.

Tampa Mayor Jane Castor stated on a CNN video call that if a hurricane struck Tampa, the federal government would rush to their aid, but the entire country is currently in the same boat—so they’re on their own. She was praised for issuing a stay at home order before Governor DeSantis issued one for the entire state, though he was criticized for suggesting that people still attend church services. Castor has been reluctant to criticize the governor, instead focusing on getting her response right by focusing on unifying her community amid a difficult and emotional moment in history.

Mayor Castor has kept in touch with mayors across the country through the US Conference of Mayors, to compare notes on what works in handling the virus, and what doesn’t.

Grit Daily reached out to the Tampa mayor’s office for questions about the coronavirus response. “We are working with local partners, like the Tampa Bay EDC [Economic Development Council], to establish an Economic Recovery Task Force that will focus on re-employment, retention, and recovery,” said a spokesperson for the mayor’s office. “But most of all, we need our community’s help rallying around our small businesses. We encourage everyone to shop local, order takeout/delivery from local restaurants, and tip a little extra if you can,” says the spokesperson.

On the issue of maintaining certain levels of sanitation at essential businesses that are staying open, the Tampa Police Department and other officials are monitoring the situation and working with businesses to ensure that they understand suggested guidelines.

“In general, residents are complying, but there’s still a select few who are not taking personal responsibility to protect themselves and others. Some young people have a misconception that COVID-19 doesn’t affect them, which couldn’t be farther from the truth. Anyone, at any age, can contract COVID-19 and spread it to others—even without symptoms. That’s why we are doing all we can to reach young people and ensure they are on our side fighting this virus,” says the Tampa mayor’s office.

Florida has always been the butt of jokes – from #FloridaMan to hurricanes, and when those on lockdown all over the country see beaches opening up, they understandably respond with a face palm. That’s why it’s important to point out the good things that come out of the state, like competent leaders such as the Tampa mayor who can get on their constituents’ level and be bluntly honest about a crisis. Mayor Caster chooses candid honesty over flowery misinformation, and the preference for such leadership shows in the polls.