VETS – Veterans Exploring Treatment Solutions – is an organization dedicated to offering veterans alternative treatments to difficult problems like PTSD and depression. Founded by Amber Capone and her husband Marcus, the group has been working to get veterans the funds to work with various healers in the psychedelic space.

I sat down to speak with Amber about her experience and her efforts to help her husband… and vets across the country.

You can donate to VETS here.

JB: My mission here is to look at psychedelics from a different angle. To treat it less like the woo-woo hippie stuff and turn it into something that people actually are going to be interested in. So it’d be helpful to understand what you guys are working on.

Amber: Well, that is just our angle. I’ll give you a condensed version of our back story. Our journey in the psychedelic world started in 2017. My husband served 13 years as a Navy SEAL and was medically retired in 2013. So for the four years following our transition back into civilian life, he sort of ran the gamut on western approaches that were available to him through military medicine and then the VA. Everything pretty much included SSRIs and a host of other pharmaceuticals and talk therapy. And he was just getting more and more frustrated as these things weren’t working or he would encounter undesired side effects. He was just really struggling with purpose and identity and feeling like completely alone in this new battle.

We had spent the preceding 13 years largely apart. So we’re also struggling as a couple. I think I was more afraid of losing him stateside after his service than I ever was during the time of war because I felt he just didn’t care to be alive. And as more as the years ticked by, I knew that suicide was something that he was struggling and I was desperate to help. I basically decided that I was not going to be able to do this anymore. I was preparing to leave him. I thought of my kids and what that would mean for them and I was afraid that even if I could escape this hell, they would be stuck without a father for the rest of their lives.

We had tried everything at that point, I didn’t think anything would work. And so I arranged for him to leave the country to try psychedelic therapy. He was reluctant. He was like a jock. He was a collegiate athlete. He didn’t do drugs and didn’t associate with people who did drugs. Our perception was that this was drugs. This was hippie, it was weird, but when you’re desperate, you’re willing to try anything.

I think we were both incredibly shocked when the outcome was so favorable, and so fast. And it didn’t mean that it had solved all the problems or the bad days didn’t come following the psychedelic journey, but it certainly was like a tourniquet to stop the bleeding that our family was experiencing. And it took weeks to really wrap our heads around what had happened. We didn’t really do any research. There wasn’t a doctor telling us you know what to expect. He did a flood dose of ibogaine followed by 5 MEO DMT. So those two together are synergistically very effective but also widely considered the two most powerful psychedelics on the planet. So he went from like 0 to 1000 overnight.

Immediately he was compelled. He said there was something here and this is exactly what my teammates need. The culture of the SEAL community, and society in general, is not to say when you’re struggling. He knew inherently that the community was facing a significant uphill battle after 20 years of sustained combat. And we started out with the grassroots movement to help our friends by raising a bit of money and sending them to the retreat clinic that Marcus had gone to.

We helped at least 12 other individuals over about 12 month period to have the same experience that Marcus did because it still seemed too good to be true and it seemed like we didn’t want to put our name on something that was so stigmatized. At the 11.5-month mark of that 12-month period, one of my best friends’ husband took his life and that gave us the conviction to actually form an organization. We needed to put some pillars in place to end veteran suicide.

JB: So you started an organization. VETS. Tell me about it.

Amber: We have three main pillars to the VETS organization: Resources, research, and advocacy. The resources column is our programs and the funding that we provide to veterans who are leaving the US for access to these therapies. We funded about 700. We have plans for 2023 to fund an additional 200-250. We don’t provide treatments, we only provide the funding for veterans to seek these experiences at vetted retreat centers. We also provide them with coaching support which is probably 90% of the process. It’s the preparation with qualified trained individuals beforehand as well as probably even more importantly on the back end so that you can incorporate insights from the journey from the experience, and you can unpack traumas. It’s really important to be working with a qualified professional in the days following. So we provide the funding, we provide the coaching support, and we provide a community for very group-oriented individuals to come back to and belong.

The second column is programming. We are always involved in various research initiatives. We just finished a groundbreaking study with Stanford on ibogaine for traumatic brain injury. We’re also involved with Ohio State for a long-term data collection project, as well as a couple of other initiatives that we’re reviewing.

The third pillar is advocacy. In essence, we’re able to take the incredible voices and experiences from resources and pair those alongside the data in order to advocate for change of both the state and federal level because, you know, the psychedelic renaissance is certainly upon us and what has been thriving in the underground for decades is suddenly coming above board.

JB: You guys are in Texas, right?

Amber: Texas was the first state to actually pass legislation around psychedelics and we were a huge part of that. The strategy to do so was pretty aggressive and it was a bit of a shot in the dark two years ago when it passed, but it certainly laid the foundation for other states to follow suit. And you know, my thought is if Texas can pass legislation, any state should be able to. So basically what Texas does and what we’re advocating for other states to do is use taxpayer funding instead of relying on philanthropy, which has been what has brought this psychedelic re-emergence to the point that it is now.

I think it’s time for state and federal dollars to take over here because there are people struggling in every single state. Veterans don’t qualify for a lot of the studies happening in private research institutions and the studies happening sort of around the globe are philanthropically and very limited in terms of needing one diagnosis and one potential treatment. Veterans have a number of diagnoses typically and so they’re ruled out of studies.

So what Texas did was ensure that veterans could take part in a study with psilocybin by pairing Baylor College of Medicine with the Houston VA.

On the Federal level, it’s a bit more complex. But we’ve also had significant progress in a pretty short amount of time at the federal level as well. I think that one of the most promising and beautiful things about our mission is that it is a space where Democrats and Republicans can actually agree on something.

JB: What would you say to veterans who aren’t happy with the drug connotations?

Amber: I’ve never been able to fully understand how we’re fighting the veteran suicide epidemic with medications linked to suicide. There’s a label on the side of every single bottle. “This is may increase thoughts of suicide suicidality.” There hasn’t been a meaningful breakthrough in mental health care since the invention of the SSRI over 35 years ago and at this point, with the veteran suicide rate of roughly 20 per day, I think we need to keep an open mind and be willing to look at anything. And I think enough veterans now are speaking out about the promise of psychedelic therapy that hopefully, people are starting to pay attention.

But beyond that, we certainly worry about words spreading too quickly or misinformation and being populated in a very, very honorable community that this is some sort of panacea or miracle cure. It is absolutely not. It unlocks the ability to do very hard work. So but someone going to a vetted safe retreat and knowing that you know they’re receiving the therapy that has been sourced and dosed appropriately in a safe setting and they’re supported with prep and integration coaching by professionals before during and after is absolutely critical to the overall success.

JB: What’s the success metric? And how many have you seen that have been successful?

JB: What can people do to help out?

Amber: Our mission is one hundred percent donor-dependent and as we grow and size and impact, it unlocks a need that we perpetually cannot meet. For every article that’s published, we get significantly more applications that we cannot fund than we do dollars to help us expand. We’re always up against the fundraising need.

You can donate to VETS here. 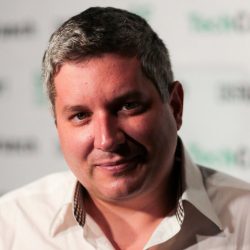 John Biggs is an Editor at Large at Grit Daily. His work has appeared in the New York Times, Gizmodo, Men's Health, Popular Science, Sync, The Stir, and Grit Daily and he's written multiple books including Black Hat and Bloggers Boot Camp.