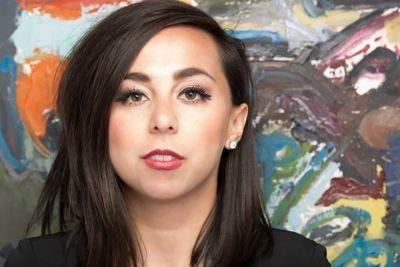 Dana Blickensderfer, the great granddaughter of the man who invented the original Blickensderfer typewriter, is an artist who carries her family legacy of entrepreneurship into the 21st century. Originally from Long Island, Dana moved to Tampa, FL in 2001 where she attended the University of South Florida and earned a bachelor’s degree in Public Relations.

She originally planned to attend law school like her father and brother after graduating but she received an opportunity to showcase her art at Miami Artwork the same day she was supposed to take her LSATs. Dana decided to pursue a career as an artist instead and never looked back.

In 2010 Dana founded her company Provoke Art with the intention of connecting artists to each other, galleries, and educational resources. Provoke Art began with videos on YouTube highlighting different techniques, interviewing artists, and building an online community. In 2014, Dana received the Milton and Sally Avery Scholarship to attend the New York Studio School in Brooklyn. After finishing art school and returning to Tampa Bay, Dana found that she missed the massive art scene that New York had to offer.

Back in Florida, Dana met her friend and business partner, Jonatas Chimen, on Instagram. Together the two founded the Wandering Master’s Art Salon with the intention of recreating the salon days of the 20th century when artists would get together to socialize and create art together. One of their most notable endeavors is their virtual art exhibit that they created through the utilization of virtual reality technology. The virtual art exhibit is a groundbreaking venture that has connected artists from all over the world.

The duo has also gone on to create JADA Art Academy. A platform that goes by the acronym, “Just Artists Doing Art,” JADA aims to educate and empower creative individuals with the skills, language, and understanding necessary to become critical thinkers, prolific makers, and active players in contemporary society. Dana and Jonatas both believe that is absolutely imperative for an artist to be able to market themselves and their artwork. They even coined the term “artketing.”

JADA began hosting its first artist residency program in Miami this year at Miami Art Summit and has plans on expanding its residency program to France in the near future. Any artist hoping to join the JADA residency program must first agree to the JADA manifesto. The manifesto is a list of convictions every JADA artist is required to hold. Things like “JADA artists seek mutual connection as a creative community” and “JADA artists value hard work and a rigorous studio practice.” With Dana in Tampa Bay and Jonatas in Miami, the two are poised to take over the art scene in Florida and beyond.