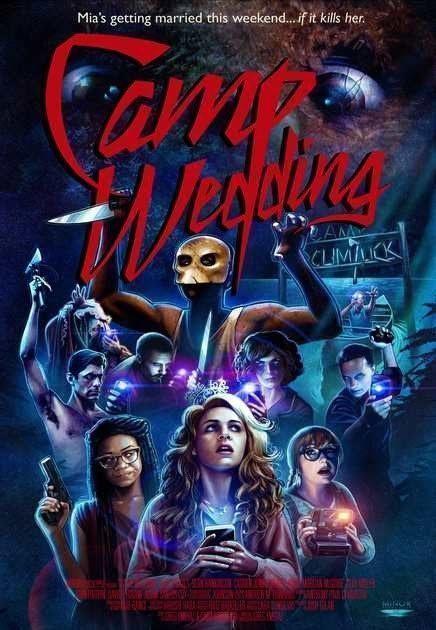 Our society is infused with an obsession over social media and smartphone technology. But at what cost is one willing to give their lives in exchange for a face-to-face communication? Welcome to Camp Wedding. On the happiest day of your life, death awaits.

Think if Netflix’s ‘Black Mirror’ came to the big screen. Today, our society is faced with this deep-rooted obsession over social media and smartphone technology. But at what cost are we willing to compromise our own safety and lives to avoid face-to-face communication? Welcome to ‘Camp Wedding,’ where the happiest day of your life, could be your last.

You can watch the film’s trailer below:

For Kelley Gates’ character, Mia, her summer is about to get extremely grim and deadly. The latest film to hit shelves this summer is a hauntingly beautiful twist on how obsessive our society has become with social media and smartphone technology, by placing it within a horror movie.

Based on the Executive Producer, Cara Consilvio’s own wedding at a summer camp, Camp Wedding is a wedding comedy that stumbles into a summer camp horror movie, but since the two genres are communicating exclusively via text, the tone doesn’t really get communicated. Had the bride and groom had done their research beforehand, or at very least, communicated face-to-face, they probably wouldn’t have chosen Camp Pocumtuck to play host to what was supposed to be the happiest day of their lives.

Little did they know the camp ground had death literally surrounding it.

In typical horror films, characters usually lose cell service or their phones entirely, making them feel completely helpless and isolated. This film does the opposite. It shows how miscommunication via text and social media can be worse than being totally cut off, forcing its characters to interact in person…or die.

Mia’s wedding party is not too keen on transforming a dilapidated summer camp into the wedding venue of her dreams– when people begin disappearing in the night, that doesn’t help either…

The AirBnB of Hell

Back in 1985, Camp Pocumtuck was a notoriously strict religious summer camp until it was forced to shut its doors when a young girl was struck by lightning and drowned. Before that, several women were burned at the stake for being witches nearby and before that, it was the site of a Native American massacre. Nowadays, it’s available on AirBnB…hint hint? Mia’s booked it and expects her wedding party to transform this now dilapidated summer camp into the wedding venue of her dreams. As her friends utterly fail to execute her master plan, they also begin disappearing.  But nothing will stop Mia from having a perfect wedding, even when someone starts texting her to hide the bodies.

Today, Grit Daily spoke with the film’s director and screenwriter, Greg Emetaz about the film’s release:

Grit Daily: What would you consider to be the most exciting aspects of filming this project?

Greg Emetaz: The best part about this were the surprises. On the first take of a scene in which Mia (Kelley Gates) receives a text message to “Hide the body, NOW!”, Kelley just instinctively covered the body of Alexis (Melissa Roth) with her wedding dress. I called cut and everyone exploded with laughter. It was not in the script and no one saw it coming. I even shot it without the dress cover and initially had it in the gag reel until wisely realizing it had to be in the movie. There were also bears on set, making things exciting and we lucked out with a random morning fog for the  dock scene that is the climax of the film.  In general, the whole shoot was ‘exciting’ because we had 100 pages to shoot in 13 days and every day was a mad dash.

GD: What do you want viewers to take away from this film?

GE: First and foremost, I just want people to have fun. I believe there is no shame in entertaining popcorn movies and I hope that Camp Wedding makes people laugh, the mystery engages them and they get a few mild scares. I also love social satire, so feel free to leave with a bit of caution about taking text messages and social media interactions too seriously. The movie is really about how technology can estrange us as much as it can bring us together. Maybe think twice about ending a friendship after a Twitter/Facebook fight and reach out to that person and bury the hatchet, before you end up throwing a hatchet at them…

You can download and stream Camp Wedding on all platforms in which films are sold and/or rented online.