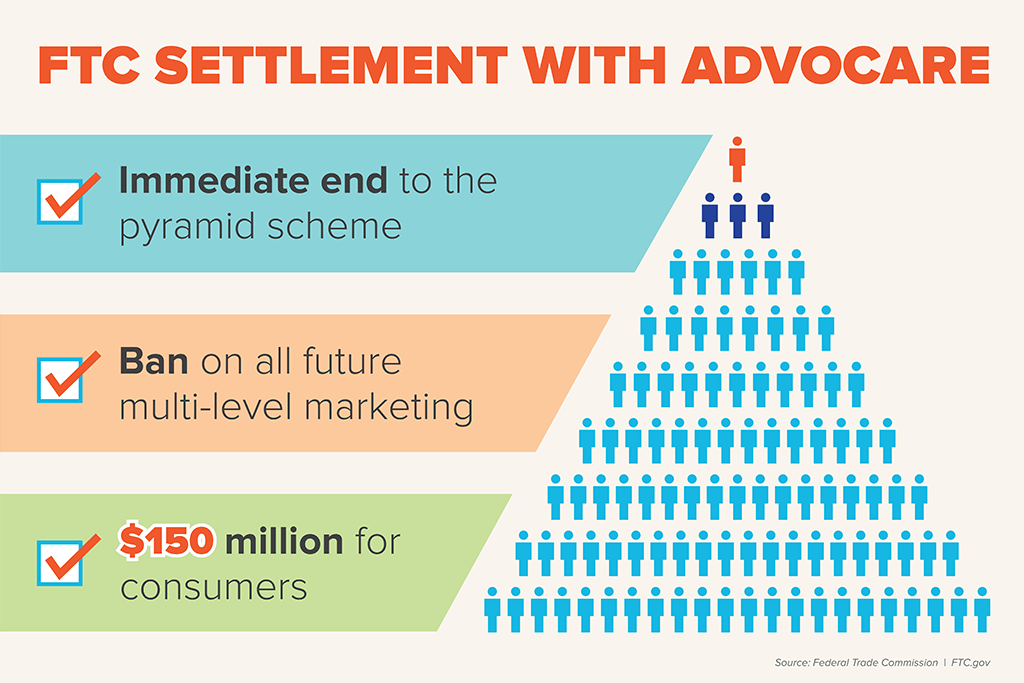 On Wednesday, the Plano-based multilevel marketing company, Advocare International, agreed to pay $150 million to the FTC to resolve legal charges that that company operated an illegal pyramid scheme that deceived consumers into believing they could earn significant income as “distributors” of its health and wellness products.

The FTC complaint filed in federal court, which has been obtained by Grit Daily, also charges two other top AdvoCare promoters, Danny and Diane McDaniel, with unlawfully promoting a pyramid scheme, making deceptive earnings claims, and providing others with the means and instrumentalities to do the same. Both Danny and Diane have also settled charges that they promoted the illegal pyramid scheme and misled consumers about their income potential, agreeing to a multi-level marketing ban and a judgment of $4 million that will be suspended when they surrender substantial assets.

Founded in 1993, AdvoCare is a multi-level marketing company that promotes health and wellness products through a network of business opportunity participants—called “Distributors,” who can purportedly earn compensation by selling AdvoCare products and by recruiting participants into their “downline.”

The FTC alleged that Texas-based AdvoCare promoted a business opportunity distributing health and wellness products, such as its Spark energy drink, through a network of hundreds of thousands of participants, known in the company as distributors. AdvoCare pitched its business opportunity through conferences, webinars, conference calls, podcasts, social media posts, videos, and print materials, according to the FTC’s complaint.

In its complaint against AdvoCare, former CEO Brian Connolly, and distributors Carlton and Lisa Hardman and Danny and Diane McDaniel, the FTC alleged that the parties falsely claimed to offer a life-changing financial solution that would allow any ordinary person to earn unlimited income, attain financial freedom, and quit their regular job.

What the FTC Has to Say

According to the FTC, AdvoCare operated an illegal pyramid scheme that pushed distributors to focus on recruiting new distributors rather than retail sales to customers.

The FTC alleged that under the AdvoCare compensation plan, participants were charged $59 to become a distributor, making them eligible to receive discounts on products, and to sell products to the public. To earn all possible forms of compensation, however, participants had to become “advisors,” which typically required them to spend between $1,200 and $2,400 purchasing AdvoCare products and accumulate thousands of dollars of product purchase volume each year, according to the complaint.

The FTC alleged that the income of AdvoCare advisors was based on their success at recruiting, with the highest rewards going to those who recruited the most advisors and generated the most purchase volume from their downline.

To recruit people, the FTC alleged, AdvoCare and the other defendants told distributors to make exaggerated claims about how much money average people could make—as much as hundreds of thousands or millions of dollars a year. The FTC alleged that distributors were told to create emotional narratives in which they struggled financially before they joined AdvoCare, but obtained financial success through AdvoCare. Distributors were also allegedly told to instill fears in potential recruits that they would suffer from regrets later if they declined to invest in AdvoCare.

The FTC alleged that the defendants told consumers that they could realize large incomes by promoting AdvoCare and that their earning capacity was limited only by their effort.

“…the sky is the limit. I’m the variable. I get to decide what I truly want according to the effort I put forth” and that “there is incredible profit that can be made through infinity.”

In reality, the FTC alleged, AdvoCare did not offer consumers a viable path to financial freedom. In 2016, 72.3 percent of distributors did not earn any compensation from AdvoCare; another 18 percent earned between one cent and $250; and another 6 percent earned between $250 and $1,000. The annual earnings distribution was nearly identical for 2012 through 2015.

“Legitimate businesses make money selling products and services, not by recruiting. The drive to recruit, especially when coupled with deceptive and inflated income claims, is the hallmark of an illegal pyramid.” said Andrew Smith, Director of the Bureau of Consumer Protection.

“The FTC is committed to shutting down illegal pyramid schemes like this and getting money back for consumers whenever possible.”

In addition to a $150 million judgment and a permanent ban on multi-level marketing, the settlement order with AdvoCare and Connolly requires them to notify all AdvoCare distributors about the FTC’s lawsuit and settlement, and to advise them that:

Published in Brands, Entrepreneurship, Health and Wellness, Legal and News