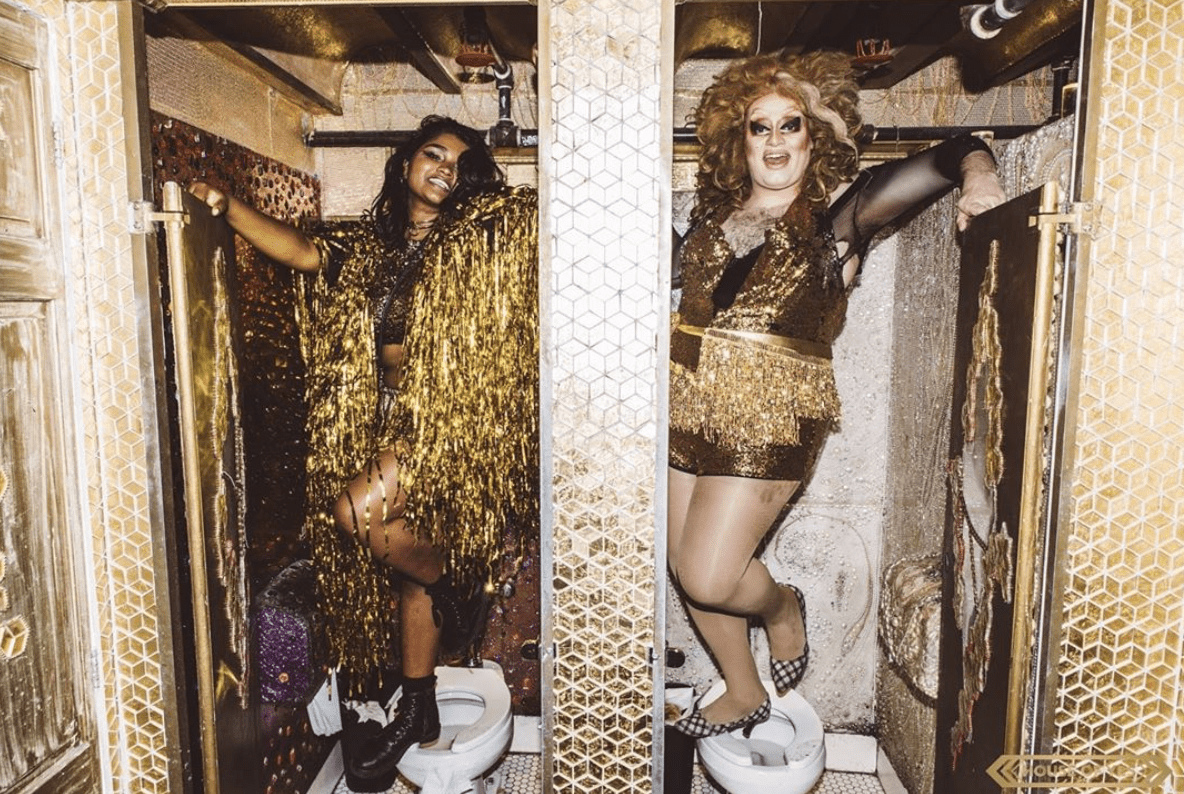 All photos of Zalika Parsons: Kenny Rodriguez for House of YES.

With the entertainment industry on a mandatory shutdown for the foreseeable future, entertainment companies, live events, and individual artists are being forced to find other ways of monetizing their time during the COVID-19 outbreak. In places like New York, where the LGBTQ+ entertainment industry represents a major portion of New York’s nightlife and music culture, the closures of bars and venues means a direct hit on some of the more pivotal figures in New York’s nightlife.

Zalika Parsons, who is known for her over-the-top comedic performances in clubs throughout Manhattan, Queens and Brooklyn, describes her style as if “Marilyn Monroe came back from the dead, on an acid trip, [and is] trying to keep up with America’s Beauty Standards—[and is] failing miserably.”

As funny as that may sound, though, it takes a decent level of both skill and theatrics to be able to pull off a makeup look on a character that is intended to look as if they’re not quite there yet in their own makeup application skills. “My signature go-to makeup [style] is triangle shaped eyeliner—no mater what—over highlighting, and a beauty mark,” says Lawrence of Parsons’ brand.

For the uninitiated, the impact that drag has had on the beauty industry is unfounded. Styles and trends like the smokey eye, overdrawn lips, and even highlighting and contouring began in the drag scene, where drag artists would create feminine features using tricks of light made with makeup. High cheek bones, sharp jaw lines, big lips, dramatic lashes and small noses are among a few of the features started by drag artists—yes, long before the Kardashians appropriated the looks for their own makeup brands today. Some of Lawrence’s favorite products are from affordable brands like NYX, Wet N’ Wild, Morphe, The Creme Shop, MAC, ELF, Milani.

Still, though, drag queens remain largely unrecognized by the beauty industry for their contributions. Where makeup and beauty products have seen a significant sales and production boom over the last decade, the artists that begin the trends haven’t exactly gotten the recognition they deserve. “Drag Artists have made every day makeup wearers confident of the cut crease, the Smokey eye and contour,” says Lawrence. “We’ve helped not only [to] normalize it but have helped encourage it and [have] shown that it’s possible to wear anything,” Lawrence says.

Zalika Parsons’ onstage persona is heading digital, where people can tune in to live drag performances on Instagram Live.

Now, in the wake of the COVID-19 shutdown, the virus’ impact on LGBTQ+ communities all over the world is both far-reaching and devastating. “As a full time performer who is in a community of full time performers, we are all [getting hit] hard,” says Lawrence. “The first things to close were venues, so we were without a job the minute America took this seriously. But we are making this work, by turning to virtual entertainment on Facebook, Instagram live and other platforms and supporting each other like family,” Lawrence says.

But while not everyone can work from home, workers in the entertainment industry are having a hard time trying to figure out how they can make money while their main sources of income are shut down. For that, Lawrence says there are ways that community members can help out their fellow entertainment industry workers even if they can’t afford to financially donate. “Some of us our doing our own shows, so watch them and tip if you can. Maybe offer to cook meals, share your laundry detergent, or even just check in,” says Lawrence.

As far as Zalika Parsons’ performances, Lawrence is using the resources available to keep the scene alive virtually and recommends that other creatives do the same—even if it just means they get the opportunity to do something they love for a little while as they’re stuck at home. “The internet is crazy. Use it! I’m doing live shows this week on Instagram [where] you can get people to tip you on Venmo. Offer virtual classes if you have a skill that is teachable, or even just learn a new skill that you can use for the future. I’m taking sewing classes this week! Use your talent!,” Lawrence says.

To take one of Lawrence’s virtual makeup classes, or even just watch a drag performance digitally, tune into @ZalikaParsons on Instagram right here.