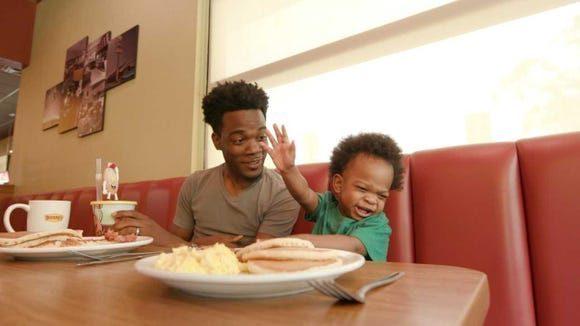 You Need To See This Adorable Denny’s Commercial

Rarely does it turn out well when companies capitalize off of viral memes. In most cases, such as with rainbow capitalism for example, it comes across as disingenuous. There is no question that brand presence on social media is getting out of control. However, some brands have found ways to successfully advertise in the digital age without being embarrassing. Denny’s, the diner chain, was able to create the most adorable Father’s Day commercial after a viral video of a father and son circulated the web over, and over, and over again just a few weeks ago.

A video of a father and his young son having an animated discussion about the finale of Empire went viral a couple of weeks ago. The father, a stand-up comedian named DJ Pryor, used his improvisational skills to make the conversation between him and his babbling baby, named Kingston, seem more realistic. “That’s exactly what I was thinking! We think a lot alike,” Pryor said to his son, who sat next to him on the couch. The video quickly garnered millions of views in just a few days, getting the attention of bigger brands online.

“We just gave everybody a glimpse of what happens all the time,” said DJ in an interview with USA Today. The stand-up comedian draws a lot of material from his life at home in his acts already, but now he feels that he has more to work with. “I talk about my family on stage. My stand-up is based off my life,” Pryor told USA Today. “I think this is just going to add to it. When I was younger, stand-up was just a way to be funny. But now, my stand-up is still funny, but I feel I’m saying something now. I’ve been doing this nearly 15 years, chasing this dream. Now, I’ve finally found my voice as a comic. I feel like I’m just adding to the narrative of my story,” he said.

Anyone who saw the video online would have recognized the father and son comedic duo in the adorable Father’s Day commercial for Denny’s last week. The ad features the two sitting in a booth at the chain diner, discussing things like Kingston’s favorite cartoons and the quality of the bacon on their plates.

The two exchange banter that gets Kingston talking, just like in the viral video. “It’s perfect that we came here to have a booth chat just among father and son,” Pryor says to his son in the ad. At the end of the video Pryor says to his son “Thank you for bringing Daddy here, I appreciate you.” After that, the video fades and Denny’s writes “Booths were made for quality time with dad. Happy Father’s Day,” as Pryor says “You buttered me up. You won me over,” to his son.

Denny’s, a company known for its good social media presence, posted the adorable exchange on their twitter account on Father’s Day. Check it out here.