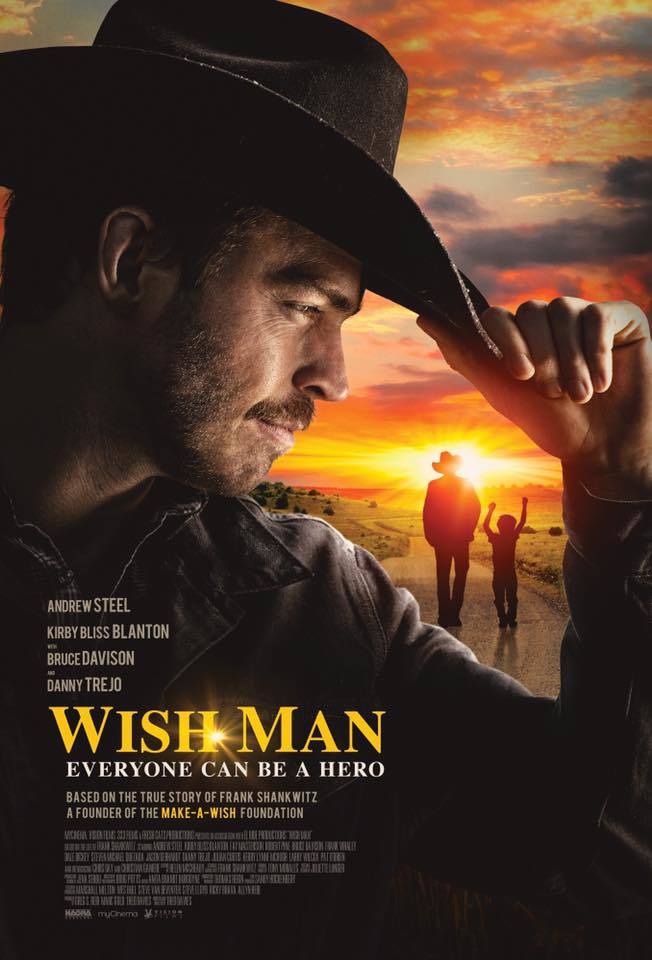 For the first time in history, the Make-A-Wish Foundation has been brought to screen in the new film, ‘Wish Man,’ starring Andrew Steel, Kirby Bliss Blanton, Frank Whaley, Danny Trejo, and Bruce Davison. The film tells the story of how the Foundation’s creator, Frank Shankwitz, was able to part from childhood trauma and transform into helping millions of children across the world.

Meet Frank Shankwitz, a motorcycle cop struggling with his past and emotional childhood trauma after being ripped apart from his father by an emotionally abusive mother.

“Ever since I was a kid, I’ve always been on my own. Never had any reason to care for anyone else. Until now […] I’ve been a fighter all my life, and I’m tired of not knowing what to fight for. Being special is never something I was used to. But Michael thought I was a hero. And if I can do it, anybody can do it.”

In what seems to be a nasty separation or divorce, Frank’s mother has done everything to keep Frank and his father apart, until he appears on their property wanting to see Frank. Before parting ways, he gives Frank a cowboy hat as a reminder that he will always be with him.

Wanting to spend time with his father, Frank’s mom decides to forcibly take Frank away, throwing him in the car, leaving nothing behind but the cowboy hat on the dusty ground. Unbeknownst to Frank, his father is on a life-long mission to track down his son and bring him back “home.”

Flash forward to Frank grown up as a motorcycle cop, we see him as a closed-off figure. Until Michael. The police department brings young Michael to visit the precinct and meet everyone.

However, he is forced to face his past and change his future when he’s almost killed in a freak car accident on a desolate highway.

This life-altering incident sparks a chain reaction that places Shankwitz on a difficult and painful path towards redemption, leading him to an unexpected relationship Michael, terminally ill with leukemia, with a life expectancy of one week. The result? An unexpected relationship between Shankwitz and the boy, but most importantly, Shankwitz discovering a light that has been buried deep within since he was a child.

“One simple act of kindness can cause a ripple effect” –Andrew Steel, “Frank Shankwitz,” ‘Wish Man’

This ripple effect later comes to be known as the Make-A-Wish foundation.

From writer and director, Theo Davies, the biographical drama, Wish Man, explores the light and dark side of Shankwitz’s life and why each hardship led to the creation of the iconic organization.

Grit Daily News: How did you come on board the project as director?

Theo Davies: I was fortunate enough to see Frank Shankwitz tell the story of how he created the Make-A-Wish foundation with 300 other people at Greg Reid’s ‘Secret Knock’ event in San Diego in 2013. I was filming the event as part of a film I was producing with Greg to be released alongside his book ‘Stickability.’ Greg interviewed Frank on stage, and when Frank finished telling the story, there wasn’t a dry eye in the house. Greg and I had spoken about making a feature film together and we sat down with Frank to discuss telling his inspiring story. Frank was on board straight away and in the Spring of 2013, I started writing the script for ‘Wish Man’. After 4 difficult years, we were able to secure enough funding and support to shoot the film in Frank’s hometown of Prescott, Arizona in September and October 2017. By September 2018, we had completed post-production, and the film is slated for theatrical release across the U.S. on June 7th, 2019. ‘Wish Man’ will also be released internationally in late Summer 2019.

TD: What makes Frank’s story so special is the same reason I knew it would be a compelling film. As a filmmaker you’re in the business of telling stories that move you. If I feel that way about a story, then I’m confident I can create the same feelings in an audience. Frank tells his story all over the country and the response is always the same – an outpouring of emotion and a lot of tears.

GD: How did you know it would translate into a compelling film?

TD: It’s a unique story, a very American story but most importantly, a reminder of what we are capable of achieving when we help those who need it. That’s what makes us human and that’s what makes this story special. As a filmmaker, you live for the moments when your audience laughs, cries and engages in the story and the characters. ‘Wish Man’ does all that and more.

GD: How did you go about casting Australian actor, Andrew Steel, for the role of Frank?

TD: Andrew met Frank Shankwitz at an event they were both attending, and they hit it off immediately. When Frank discovered he was an actor, he mentioned that someone like Andrew should be playing him in ‘Wish Man’. Of course he would say that – Andrew’s a handsome, six foot two inch hunk! Who wouldn’t want him playing them?! The truth is, Andrew is an incredibly talented actor, and the first day I met him was when he read for the lead role. I think he read four different scenes.

This gave us a great opportunity to see how Andrew performed in various situations and scenarios, but most importantly to see his emotional range. The role called for someone who could feel pain, suffering, personal anguish, but also humility, compassion and love. After reviewing the tapes of Andrew’s performances alongside the other actors we looked at, it was a unanimous decision to cast him to play Frank Shankwitz. As the director, casting Andrew was one of the moments I’m most proud of. His performance was quite simply exceptional.

GD: What were some of the biggest challenges to getting the film funded and made?

TD: Making an indie film from scratch isn’t easy. But then again, nothing worth having ever is. When I watch the film, I feel that the six years of blood, sweat and tears was worth every second. The biggest challenges we faced were trying to convince collaborators and investors to take a chance with us. We’re a relatively inexperienced team, but our passion, perseverance and unwavering desire to tell this story meant only one thing – we would never give up until this film was made and this story was told. The investors who chose to come on this journey with us shared our passion and vision for the project and this is ultimately what got the film over the line.

GD: What advice would you have for other filmmakers who may face these same challenges?

TD: My advice to other filmmakers is simple. Never give up. If you have a burning desire to tell a story, that fire will never be extinguished until the story is told. You will be thinking about it 24/7, and that’s a good thing. Live it, breathe it, know it inside out. Let it become an obsession. That passion and desire is exactly what you need to succeed in telling and sharing your story. Every year, millions of people are deterred from following their dreams for one reason or another — usually because of a fear of failure. Passion is like a magnet and if you want to tell your story, you must project that passion in order to get other people as excited about telling it as you are. The other tip is to have a great script. It sounds obvious, but make sure you have a strong blueprint for your film. It’s much easier to get motivated by a good story, whether you’re a director, producer, actor or cinematographer. Get feedback from people who know what they’re talking about, make it better and don’t settle for a good script when it can be great.

GD: What is your wish in regard to what you hope viewers take away from this film?

TD: I hope audiences are moved by the personal, emotional story at the heart of the film. We have made a tearjerker that we’re incredibly proud of because it moves people to tears without being overly sentimental. It’s a fine balancing act that I believe we got right in all the ways we intended. Now more than ever, we’re in desperate need of inspiring, uplifting stories to give hope and motivate positive change in the world. In recent movies, we’re bombarded with superhero franchises, but what we hope to show in ‘Wish Man’ is that heroes are ordinary, everyday people who spread kindness and goodwill. Whether you’re paying it forward or giving back, one simple act of kindness can have a ripple effect to change the world.

The World Premiere of Wish Man will be on June 4 at the Egyptian Theater in Hollywood, with two screenings in San Diego and Phoenix on June 5 and June 6. The film is due out nationwide June 7 in select theaters.

“I’m at the crossroads of my life, and I’m choosing which path to take—a new path of hope, dreams, and everything that is good in this world.”