Wine Down and Chill with a Nice Chianti

Are you looking for a food & wine column that’s fun to read with wine suggestions that you can easily afford?

Then check back each Friday for our next edition of  “Wine Down for the Weekend”. Read on for an easy-to-prepare-at-home no-need-for-a-recipe fabulous dinner paired with an inexpensive bottle of decent wine and a viewing suggestion. We’re here to help you sit back, wine down and chill.

This week’s wine-food-show combo came together pretty weekly. As a forever fan of Sir Anthony Hopkins that still gets chills whenever a friend taunts me by saying the most unforgettable and disturbing line from Silence of the Lambs, “It puts the lotion on…” the choices became obvious. Tonight’s launch of Season 3 of The Santa Clarita Diet inspired the wine and food selection. In a nod to pop culture, Chianti and fava beans were, of course, the necessary choices to accompany Drew Barrymore’s hilarious show about cannibalism. It’s okay – she only eats bad people.

As you read this, hear Sir Anthony Hopkins’ voice in your head saying, “I’d like a nice chianti.” It sounds so much better when he says it. Chianti wines tend to lean towards the pricier side for reds. And for good reason. 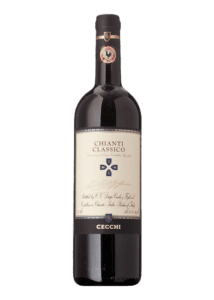 Today’s pick to wine down and chill with is the 2016 Cecchi Chianti Classico. Affordably priced at just shy of $20 and available in most wine stores, it’s a good choice. Read more about the wine and its history here.

This wine is meant to be enjoyed just slightly less than room temperature. Given that Mother Nature has not yet treated us to warm Spring weather, by the time you get it home, it should be at the right temperature to serve. Pour yourself a glass. What do you smell? You should be able to catch a whiff of cherries or tomatoes.

Next, take a look at the beautiful ruby-red color. Give it a swirl then put a little on your tongue. That fruit-forwardness should come through along with a bit of acidity, which makes it slightly sour. Sun-dried tomatoes may be the taste profile that you recognize. And you should probably get a taste of some strong flavors that are a little like tobacco or leather. Maybe even a bit of smoke, but it’s a strong odor and taste nonetheless.

The easiest way to spot a Chianti Classico? Look for a black rooster on the wrap around the neck of the bottle. Only wines grown in the Chianti Classico region of Italy can legally use the symbol. Another tip: a red neck wrap means that it is a young wine which should be consumed now whereas a gold wrap signifies a Riserva, which is a wine that can be aged for many years until it is enjoyed.

Some Background on Chianti Wines

In a single word – Tuscany. That word alone should conjure up all kinds of wonderful imagery like rolling green hills, luscious red wines, espresso, EVOO plus fashionable, friendly people and delectable food. It’s quite the combo.

Chianti Classicos are typically aged about one year whereas Riserva wines are aged about twice as long. The clay-based soils work wonders for the blue-skinned Sangiovese grapes which are the hallmark of these wines. Tuscany’s hills have been home to vintners for over 600 years. However, the Sangiovese grapes themselves have had a limited migration path. That is, they’re pretty tough to find outside of Italy.

By definition, Chianti Classico wines need to contain at least 80% Sangiovese grapes and then a blend of whatever else the vintner chooses. Wines are aged in oak casks typically for a year or more. The Sangiovese-blends create a medium-bodied, slightly tart fruitiness to the wine. The aging helps round out the flavors to create a smooth finish that pairs well with gamey, spicy foods. And pretty much anything within the Italian cuisine and beyond.

Eating animal organs isn’t really my thing so I’ve taken the liberty of not being so literal with respect to the food-show pairing this week. And I wanted fava beans but no go. My grocer was out of them earlier this week so, just like that, I needed a Plan B. Lucky for me I’m creative. Wink! Instead, I opted for red kidney beans. Perhaps those are more in keeping with the theme anyway. 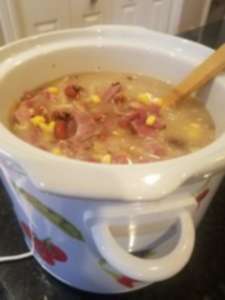 Today’s easy-to-prepare at home without a recipe meal is Soupe de Jambon. Oui. That’s French. And that is ham. With the added flavor of red kidney beans, of course. Let’s get this cooked up so that we can settle in, wine down and chill.

One, pick your protein. Just because this is called Soupe de Jambon doesn’t mean you have to actually use ham. I know, I’m messing you up but stick with me. If you’re a veg, double up on the red kidney beans. If you’re a meat-eater, chop up a packaged ham steak into some bite-sized chunks.

Two, dice up 4-5 white or yellow cooking onions. Fry them up in schloads of butter: as in, at least half a stick. That’s the secret ingredient here. As with all things French, it’s the butter that makes it better! Personally, something gets lost in translation when you say it the way that the French do, “Le beurre le rend meilleur.”

Three, back to the protein. Whether you used ham or not, you need some pale red kidney beans. Forget about buying a bag of dried beans, soaking them the night before, then cooking them for 6-8 hours. I can’t even … the struggle is real, people. Buy a big can and call it done. Dump them into a pot (or slow cooker) together with the bean juice.

Four, add vegetable broth into the bean can to get every last bit of flavor out. If you don’t have veggie broth, buy a package of dried vegetable bouillon cubes (typically found in the spice section of grocery stores) and toss in two cubes with just enough water to drown the ham, beans, and onions.

Five, throw in a bag of frozen white or yellow corn. Cook the mixture on medium-low for about a half hour until it’s soupy warm. That should give you plenty of time to get into the wine so that you’re well on your way into a wine down and chill evening by the time that it’s ready to serve. If you have no patience and no time, just throw it in a bowl and pop it into the microwave.

Pour yourself a glass and settle in to wine down and chill.

Drew Barrymore is pretty much the epitome of quirky. From naming her daughters Olive and Frankie to her charming smirk and not-ready-for-TV hair that she’s renowned for, to her childhood debut on E.T. to her very public battles with addiction and poor choices in men, she rocks. She eschews Hollywood yet is ironically part of its very fabric. Drew was discovered as a child, made it to the big screen, got caught up in all the drugs and other nonsense yet somehow, made it to the other side of fame and still remains grounded. The secret’s out – I’m a fan! 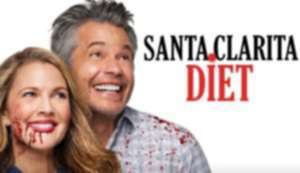 I was more than just a wee bit tentative about The Santa Clarita Diet when it first aired. I mean, I love Drew but I didn’t think that even she could carry such a crazy plot through a whole episode, let alone a full season. Or a second. Or a third. But here we are. Episode 1 of Season 3 airs tonight on Netflix. Drew and Timothy Olyphant play a husband and wife team of realtors who are living ordinary, quiet lives raising their teenage daughter in the ‘burbs of Santa Clarita. After a freakish spider bite, Drew gets a taste for human flesh. It doesn’t take long before she becomes immortalized as an insatiable zombie who gets healthier and more beautiful with every bite of human flesh that she eats. The family of three must continue to source fresh meat for Drew but keep it a secret. As with any twisted plot like this, of course, hilarity ensues. Crank it up and laugh away!

Pour yourself a big glass, cradle a steamy bowl of Frenchy soup, flick on the screen, then wine down and chill.

Dr. Loralyn Mears is a Columnist at Grit Daily and a podcast host (The Grit Files, which aims to shine the spotlight on female founders). She is a content marketer, founder of the WORKtech startup, STEERus, specializing in personal and professional development to address gaps in soft skills - communication in particular. In her consultancy practice, she helps clients with content and strategy. Loralyn spent over a decade playing with mosquito DNA, got her PhD, decided she would rather market science than be at the bench and has never looked back. Along the way, she’s wined and dined her way around the globe. She's authored two books, including the 2018 Gold Medal Indie Book award-winning, One Sip At a Time: a Memoir and the hard science thriller, "The Battle for Humanity: How Science Saved Us."