By Jack Giroux
GRIT  DAILY ®
The Premier Startup News Hub.
Grit Daily News is the premier startup news hub. It is the top news source on Millennial and Gen Z startups — from fashion, tech, influencers, entrepreneurship, and funding.
Will There Be A Lupin Season 2?
By Jack Giroux

Audiences and critics are already craving for more Netflix’s Lupin. It’s a slick piece of spectacle with the right amount of drama and levity, as well as character and suspense. Audiences will see more of the suave thief in part two of Lupin season one. It’s not exactly a Lupin season 2, but given the […]

Audiences and critics are already craving for more Netflix’s Lupin. It’s a slick piece of spectacle with the right amount of drama and levity, as well as character and suspense. Audiences will see more of the suave thief in part two of Lupin season one. It’s not exactly a Lupin season 2, but given the success of the series, another season is in the cards.

By the end of this month, the show will have reached around 70 million viewers, making Lupin an even bigger hit than The Queen’s Gambit and Bridgerton. Everyone knows how popular those shows have been, too, with pop culture fans going wild for them.

Following the cliffhanger episode, the Netflix show’s creators, George Kay and François Uzan, won’t have to worry about tying up loose ends during the pandemic. Again, they’ve already shot the next five episodes. There is no confirmed release date, though, but the streaming service did confirm the next five episodes are coming later this year.

The last episode ended with the thief, Assane, separated from his son. According to co-creator George Kay, the next five episodes will dig into the thief’s past. “The backstory is going to take you up to how he got to that point,” Kay said. “Right now we don’t know what happened to him in the gap between him being, like, 15 and being 40. So we’re kind of retrospectively educating with this huge backstory.” Kay also confirmed he’s already outlining Assane’s next adventure beyond Part II. He is already working on Lupin season 2.

The co-creator can’t say much about the future of the series, but he did confirm Lupin season 2 won’t go too far into the future. “There’s a lot of that that’s worked out [in season two], but not all the details,” Kay said. “You’re always looking to go back to backstories and plunder them for twists. So what if that guy who’s around [Assane] when he’s 25 isn’t so loyal to him…How’s that going to change things for the character now? You want to have a backstory that you’ve thought through really well but, from a writing perspective, remains a place that you can go looking for ideas. Season two won’t be set in the too-distant future, because you’re constantly trying to use your backstory to jump around in time. We want to keep a continual story line in the present for Assane.”

Lupin’s son and girlfriend will remain a major part of the story, as will the city of Paris. Fans should already expect “two or three really cool Parisian-set scenes and sequences,” as well as episodes that go bigger in scale. As for the next five episodes, the anti-hero thief will settle his score with the Pellegrini family. “Parts one and two are essentially Assane’s origin story on his revenge against Pellegrini—can he and will he achieve that, and how did he kind of get here?” the co-creator confirmed. “That became a real kind of good bookend for those five episodes.” With a smile, Kay added, “If people are annoyed that they don’t know what happens next, that’s a good thing. We should encourage that.” 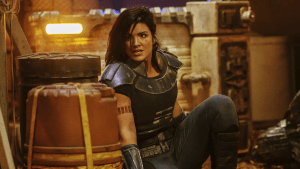