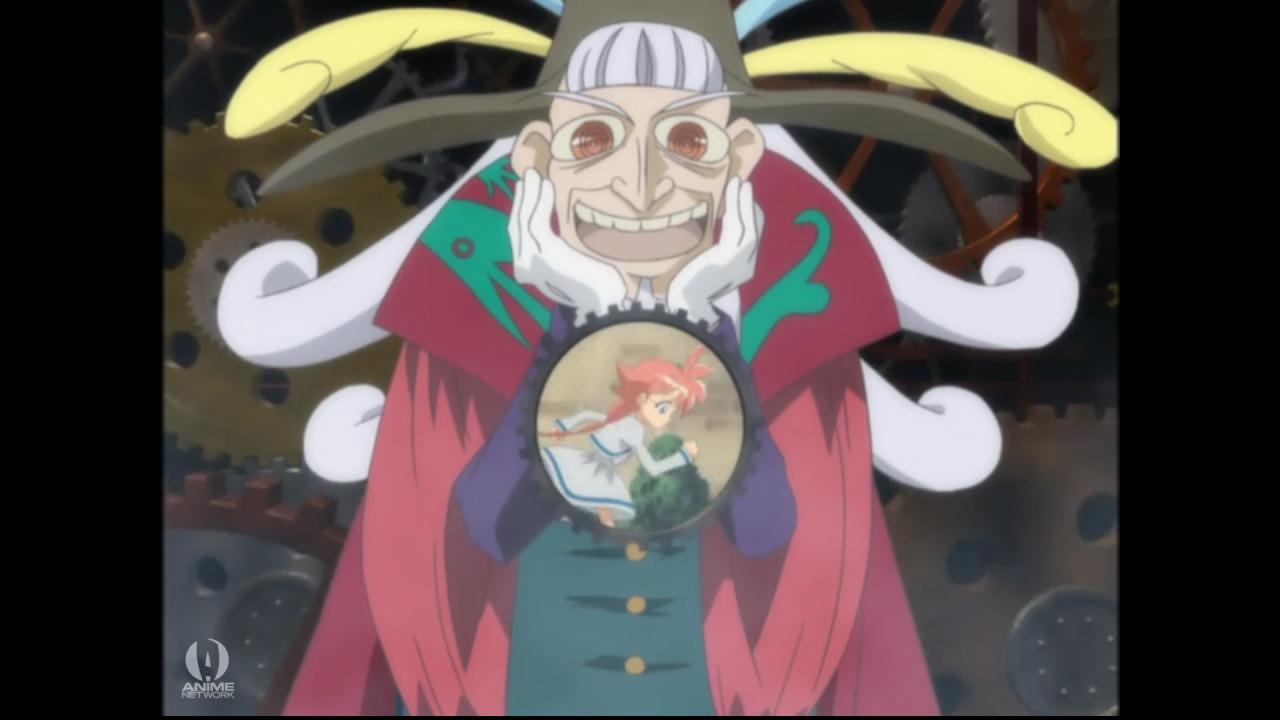 Once upon a time, there was a little duck who wanted to help a prince who had lost his heart. An intrigued writer gave the duck a pendant to transform into a human girl so she could help the prince get his heart back. Along the way the duck discovers just how much she loves being a human girl, with best friends, a love of ballet, and the ability to help those in need. Welcome to Princess Tutu, an eclectic and incredible anime with great characters, strong storytelling and a great soundtrack filled with classical music pieces.

Duck is a ballet student who really can’t dance that well. She’s hopelessly in love with fellow ballet student Mytho, and thinks that she’d do anything to see him smile. It’s an innocent, “I want,” moment for our hapless heroine, until this guy shows up.

Drosselmeyer is basically an enigmatic man who is responsible for how meta this show is. The gist is that he wrote a story called, “The Prince and the Raven,” where a heroic prince shattered his heart to seal the evil raven away.

Guess who the prince is? Turns out the boy Duck was crushing on was actually the prince from the story. The reason he doesn’t smile is because he literally has no emotions, because he shattered his own heart. But is the world Duck living just a continuation of Drosselmeyer’s story?

Drosselmeyer grants Duck the power to turn into Princess Tutu with a magical pendant. As Princess Tutu, Duck is the only one with the power to restore shards of Mytho’s heart back to him. What’s really lovely is that the “battle” sequences Princess Tutu encounters in order to restore the shards end up being beautiful ballet duels. Each episode of the show is also named after a ballet, and the entire score is made up of gorgeous classical music.

There’s a lot going on in the show. Trust me, it’s worth it. One of my absolutely favorite things Princess Tutu does is the way the show deals with it’s two leading ladies. Duck is one, Rue is the other.

Rue is Duck’s opposite. She’s the best ballerina at the school, and also happens to be Mytho’s girlfriend. However, she grows increasingly jealous when Princess Tutu starts returning shards of Mytho’s heart, and thus her dark alter-ego Princess Kraehe is born. Kraehe starts out as the typical foil to our pristine Princess Tutu, but Duck never stops believing in her. Even when Kraehe flat out tells Duck that Rue doesn’t exist anymore Duck responds that she doesn’t believe that, and to her, Kraehe was still Rue deep down.

What could’ve easily been a typical case of two girls fighting over the same guy evolves into a story that actually treats both Duck and Rue with sympathy and respect. Duck’s love for her friend Rue is frankly far more interesting than how she feels about Mytho. Another great case of the anime subverting expectations is Duck’s relationship with another ballet dancer at the school: Fakir.

Fakir is introduced as Mythos’s overly protective friend with a bad temper. Once again we have someone being introduced as being, “bad,” until the show peels away the layers of their character and has you rooting for them until the end. Fakir is the knight in, “The Prince and the Raven,” who got torn in two trying to protect the prince. His unlikely friendship with Duck/Princess Tutu is another one of the greatest things about the show, especially when they start working together to try to bring Drosselmeyer down.

Princess Tutu is all about challenging who you are, your fate, and what it means to embrace your true self. It might seem like frothy fun on first glance, but give this show a go. You won’t regret it.