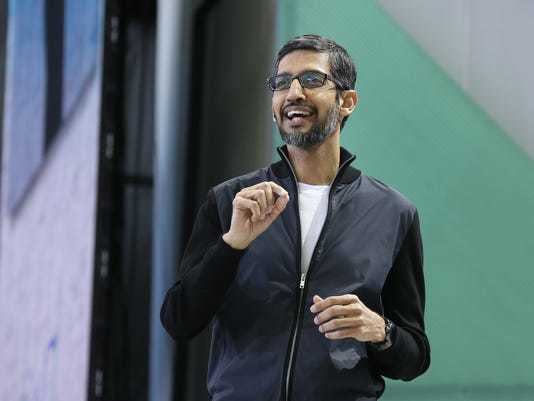 To characterize activity so far, and to extrapolate market directions, we’ll look at three tech giants chasing audio AR. With Apple out of the way, we’ll now tackle Google (and Bose next week). How is audio AR aligned with Google’s master plan to be the “knowledge layer” for the spatial web?

A Vessel for Google Assistant

Though Apple has a big head start with momentum and an installed base of AirPods, Google appears to have its eyes on a hearables future given its less-popular and more clunky Pixel Buds. Though not as sleek, they’re a vessel for a superior voice/AI engine: Google Assistant.

[Uptade 9:15 am PDT: Google announced last week at its Made By Google event that a sleeker set of wireless Pixel Buds will ship this spring for $179]

In fact, Apple’s Achilles heel for AR audio is the famously inept Siri. Google Assistant will win the voice search and “general knowledge” AI game, based on the extensiveness of Google’s knowledge graph. It can process voice queries and answer questions with greater reliability.

And this could be a winning factor for Google. Hardware sleekness can be improved much easier than a quality AI engine can be built. So Apple will have to counterbalance Siri’s detriments with useful AirPod apps, or by opening up the innovation to developers like it did with iOS and tvOS.

Google also wins on sheer scale. Apple’s AirPods have a total addressable market of about 900 million global iPhones. Android however has a much larger global base of devices that is closer to 2.5 billion. Most of those aren’t yet compatible with Pixel Buds but it’s a larger shell to grow into.

Google’s go-to-market strategy for audio AR could further its reach advantage. Compared to Apple’s classic vertical integration play with its own hardware and software, Google will cast a wider net by opening it up Assistant hardware OEMs to power voice functionality for their devices.

After examining Apple’s motivating factors for AR audio as a way of predicting its future, performing the same exercise for Google reveals significant vested interest in hearables. It’s all about increasing direct touchpoints with consumers, which is a longstanding pattern.

As background, Google’s position at the front door to the web was displaced to a certain degree in the app-heavy paradigm of the smartphone era. So, many of its moves are to counterbalance resulting search volume attrition through AI-fueled mobile tools like Assistant and Google Lens.

Hearables help it accomplish that through an always-on audible channel to access Google’s knowledge graph. This can happen through traditional voice queries (pull) or through predictive, proactive and personalized alerts (push) which Google is already developing through Assistant.

This vision would also align with Google’s smartphone-era construct of “micro-moments.” These are the content snacking moments in the grocery line or subway — pulling out your phone for a quick fix of email, Facebook or Snapchat. It created lots of opportunities for content delivery.

But as we’ve examined, audio’s advantage is discreetness. It’s less cumbersome than pulling out your phone. And because AR glasses are held back by cultural and stylistic factors, the subtlety of ambient audio could fill an important gap. All-day use also creates a massive opening for content.

So far, Google’s experimental use case for Pixel Buds is real-time language translation through Assistant. This is a good example of the directions Google’s audio AR could go, but we believe retail commerce and local discovery will be its real endgame.