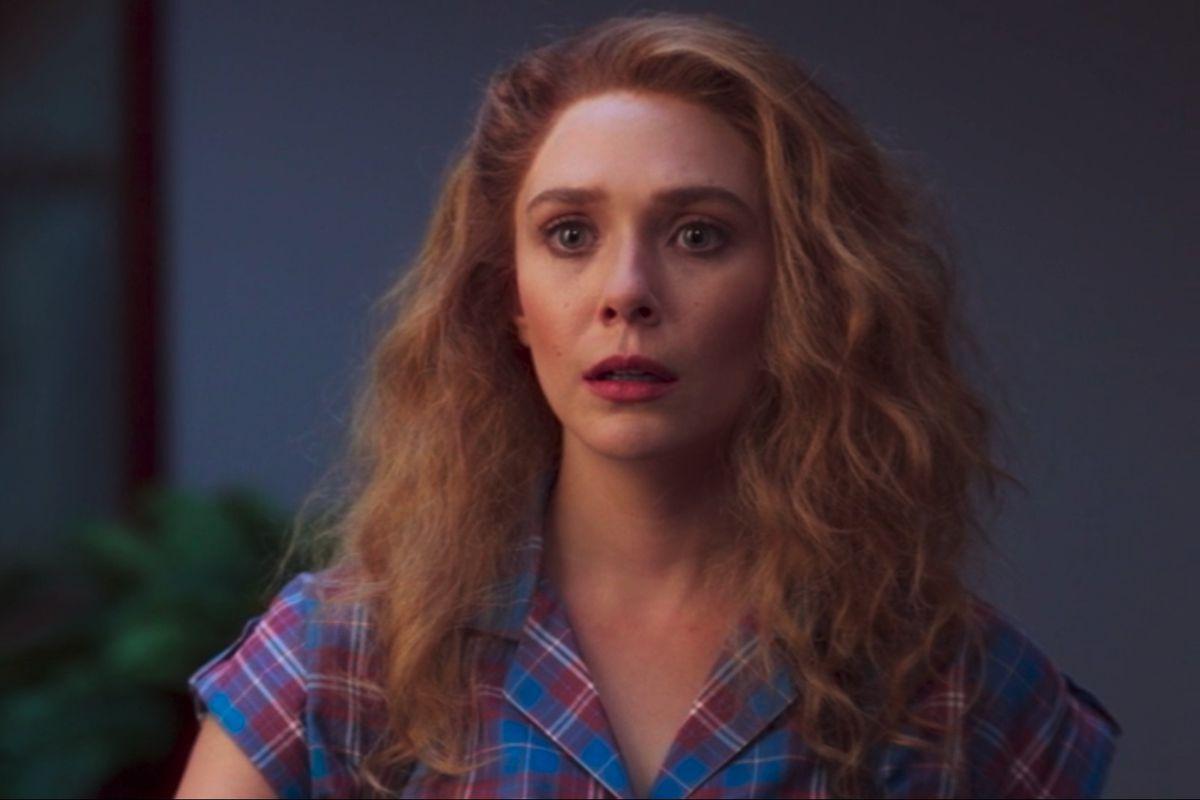 By Katherine Stinson ON February 7, 2021

A major surprise cameo for this week’s episode of WandaVision shocked fans. After Wanda Maximoff (Elizabeth Olsen) has a fight with her husband Vision (Paul Bettany), the doorbell rings. The ring happens just after Wanda and Vision were fighting over Wanda seemingly having control over Westview and the townspeople. The latest episode in the series revealed some key hints for Disney’s plans for Marvel in the future.

*Warning! Spoilers for episode five of WandaVision ahead*

Wanda insists she didn’t make the doorbell ring but she’s literally saved by the bell as she opens the door to a game-changing MCU moment: Evan Peters reprising his role as Quicksilver in WandaVision from X-Men: Days of Future Past, X-Men: Apocalypse and Dark Phoenix instead of Aaron-Taylor Johnson, who played Pietro in Age of Ultron. Right after he enters the house, Darcy (Kat Dennings) makes a meta-joke about this in the episode, exclaiming, “She recast Pietro?”

Evan Peters’ appearance appears to be a big hint as to what Disney has planned for Marvel since it purchased the franchise back in 2009. Ten years later, Disney bought 21st century Fox studios, the film studio behind the X-Men films that Evan Peters appeared in as Quicksilver. Now that Disney owns Fox that means that Marvel has the rights to use the comic book characters that previously belonged to Fox in future MCU shows and films. This means that Marvel can introduce the X-Men into the MCU.

What Does This Mean In WandaVision/The MCU Going Forward?

It’s been confirmed since before WandaVision premiered that the show was going to clearly transition into Doctor Strange: The Multiverse of Madness. This makes sense given that Olsen will also be reprising her role as Wanda in the Doctor Strange sequel as well, and with what we know about Disney’s plans for Marvel thus far. Has Wanda’s actions in WandaVision ripped a whole in reality, leading to the possibility of a multiverse, leading to a plausible explanation for an X-Men/MCU crossover?

That would explain Peter’s appearance as Quicksilver/Pietro instead of Aaron-Taylor Johnson. Another interesting X-Men connection to Wanda’s character is Magneto.

Magneto is actually Wanda’s father in the comics. Olsen did set the internet-sphere ablaze recently when she teased a Luke-Skywalker-in-The-Mandalorian-esque cameo in WandaVision. As cool as Quicksilver’s return in episode five was this week, the cameo that Olsen teased seems to be someone else that will appear on a future episode. (Paul Bettany also teased that he had some big scenes with a secret actor he’s always wanted to work with.) Could it be Ian McKellen making his first MCU appearance as Magneto as many have theorized?

Peters’ appearance as Quicksilver also makes sense given the context of the episode. Wanda explains to her kids Billy and Tommy that she can’t revive the dead. Of course the episode also shows a scene where Wanda steals Vision’s body from S.W.O.R.D headquarters and somehow revives him, but Vision isn’t a human being in the first place so Wanda being able to re-animate makes plausible sense.

Did Wanda subconsciously bring another Pietro into her universe because the Pietro in her universe couldn’t be brought back from the dead? I mean, the MCU has already sort of done this with Gamora (Zoe Saldana.) Like Vision, Gamora was a casualty of Thanos in Avengers: Infinity War, who threw her over a cliff to her death in order to get the Soul stone (father of the year anyone?) The only reason Gamora returns in Avengers: Endgame is due to the fact that it’s 2014 Gamora being thrown into the 2023 Endgame timeline. However, it’s technically Gamora from the same universe, just an earlier timeline, while Evan Peters’ Quicksilver is technically from another universe separate from the one fans have grown to know in the MCU.

Twitter of course had a ball with Quicksilver’s appearance.

Here’s a highlight of Evan Peters as Quicksilver.

Messing with time and alternate universes aside, Disney’s plans for Marvel appears to be paying off now for fans with the first introduction of X-Men in the MCU via Evan Peters reprising his role as Quicksilver. What this means for the future of MCU is definitely exciting. We can’t wait to see what happens next week when WandaVision returns for episode six.