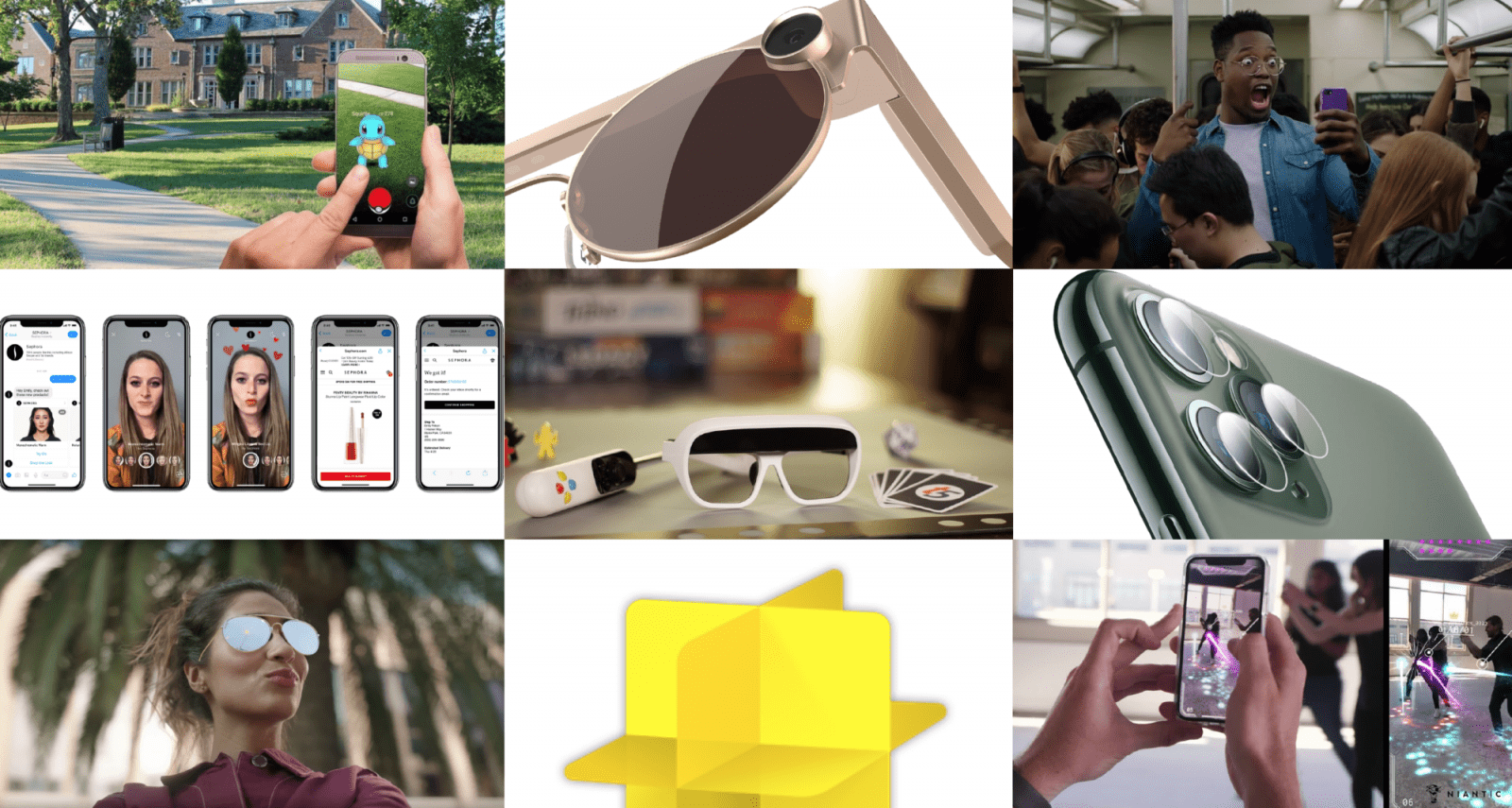 What Can We Learn From Snap’s AR Lead?

This includes pinpointing fitting AR use cases, as well as more granular strategies around user experience (UX). What types of AR interactions resonate with consumers? And what best practices are being standardized for experience and interface design?

These questions compel acute attention to quantifiable AR successes and best practices. Not only does the AR’s early stages mean these questions are prevalent… but also that their answers are scarce. So we ventured to extract lessons from today’s AR leaders, starting with Snap.

Early-stage consumer AR comes in lots of shapes and sizes. But the most popular form is social lenses. Snapchat holds the leading share of AR lens engagement and ad revenue, propelled by it’s “camera-company” focus and ability to reach AR-forward audiences in targeted ways.

As background, AR’s biggest revenue category so far is advertising. This is happening as brands are attracted to the technology’s ability to demonstrate products in immersive ways. That appeals to their creative sensibilities, erstwhile stuck in 2D media and confining formats like banner ads.

But as discussed in a recent XRDC presentation we gave (video below), AR’s appeal in advertising also stems from another attribute: the rare ability to span the consumer purchase funnel. Branded AR lenses are conducive to both upper-funnel and lower-funnel contexts.

For example, the News Feed can achieve sizable reach given Facebook’s operational scale. It can also achieve high-performance through social targeting to prompt AR lenses for product try-ons. The immersive UX can then drive product purchases, further down the funnel.

That last step in the funnel — the actual transaction — is obviously the most important. AR’s inherent visualization can boost these conversion rates, but it’s also accelerated by transactional functionality that’s increasingly incorporated into lens-forward channels like Facebook and Snap.

Here, Instagram could be AR’s sleeping giant (examined in Part III of this report series). Not only did it launch AR in 2019 by opening it up to Facebook’s Spark AR lens developer platform, but it’s increasingly infusing shopping and transactional functionality — a powerful combo.

This all contributes to Artillery Intelligence’s projections for $1.6 billion in AR advertising revenue last year, growing to $8.8 billion by 2023. Today that’s mostly AR lenses in social channels, for all the reasons mentioned above, but it will start to expand into other areas like visual search.

Snapchat: King of The Hill

Within AR advertising business models – again, the revenue leader today – the most performant company is Snapchat. Though Facebook is embracing AR lenses as an ad format, Snapchat still leads with an estimated $1.114 billion of the $1.6 billion ad revenues cited earlier.

This is notable given Facebook’s reach advantage. Its two billion active users dwarf Snapchat’s 218 million. But Snap has its own competitive advantages, including more AR focus, congruent with its camera-forward approach. It also has greater engagement among camera-natives.

Specifically, Gen Z uses Snapchat more than any other generation. Among teens, more use Snapchat (69 percent) than Facebook (51 percent) according to a Pew Research Center survey. In terms of frequency, 35 percent of teens use Snapchat more often than other social apps.

Similarly, a recent study by JWT intelligence found that 40 percent of Gen Z individuals use AR filters and lenses to express themselves creatively. The same survey rated Snapchat the highest for social sharing activity, validating the common sentiment that Snap has an edge with Gen Z.

All these advantages are starting to show. Snapchat is the engagement leader among consumer AR players, to the tune of 163 million lens users on a daily-active basis. It has also reported that active AR lens users engage “nearly 30 times per day,” with 15 billion cumulative views to date.

These frequency and active-use metrics are important, as they deviate from the “vanity metrics” we more often hear in-app marketing, such as downloads. Active-use indicators are a lot more telling of AR’s impact, and include metrics we’ve examined elsewhere such as session lengths.

We’ll also address the Pokémon in the room. Pokémon Go is often cited as AR’s revenue leader. This is valid, given $3 billion+ in cumulative revenue. But that’s not fully attributable to AR, which is a matter of definitions. In any case, we’ll tackle Pokémon Go in Part II of this report series.

Back to Snapchat, the key question is what specific tactics it’s applying to achieve this engagement and, more importantly, revenue. The two are tied as brand advertisers develop an interest in reaching the engaged audience that Snap has cultivated. Next we’ll explore the how.

The article What Can We Learn From Snap’s AR Lead? by Mike Boland first appeared on AR Insider.