For over ten years, Diariata N’Diaye (Diata) has been fighting to end sexual violence against women and girls across Africa and Europe. In 2015, she founded the charity, Resonantes, and launched the creation of the first application on the market, specifically designed to help young girls and women victimized by violence—APP-Elles. Headquartered in France, the […]

For over ten years, Diariata N’Diaye (Diata) has been fighting to end sexual violence against women and girls across Africa and Europe.

In 2015, she founded the charity, Resonantes, and launched the creation of the first application on the market, specifically designed to help young girls and women victimized by violence—APP-Elles. Headquartered in France, the name “APP-Elles” itself, has the same sound as “appelle”, which in french, means “call.” “Elles” means “they” in the feminine form. Inviting everyone to take action, this bracelet is a call out to victims who face any form of physical and/or psychological violence.

APP-Elles consists of a mobile application, available on both iOS and Google Play Store, and a stylish bracelet, that allows its wearer to discretely report any threatening situation to the proper authorities and emergency contacts, without letting their assailant know.

While in the marketplace for four (4) years, N’Diaye has made her first international debut here at CES 2019 in Las Vegas. GritDaily spoke exclusively with N’Diaye and APP-Elles about how bringing this technology into the legal world in the U.S. can really help minimize domestic violence and other acts of violence that are becoming so prevalent, especially in light of our current political climate.

Wearing Could Save Your Life 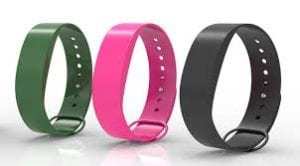 N’Diaye, a victim herself when she was younger, discovered a solution after, and became an activist to help fight this. “I had this idea to create a tool that would prevent violence outright,” N’Diaye told us.

“The problem is most women don’t have this tool readily available, so I wanted to provide this to younger women to help show them that as a survivor, she can help them survive as well.”

According to Insaff El Hassini, a representative from Resonantes here at CES, this is the first year they have gone international.

“For a few years, we’ve had to develop the product in France, but we now have a geographic calibration within our app for setting up the bracelet, whether you are in the U.S. or abroad.”

When it comes to addressing the unfortunate instances of violence, the application, depending upon your location, will filter out and provide the victim with a list of resources, shelters, and hotlines to call and report the incident in efforts to address the aftermath of the incident.

“Once you are victimized by an incident of violence, that’s not the end; you then have to deal with it,” said Hassini. “It is for this reason we filter out and provide you with an exclusive list of organizations, professionals, and resources for reporting and addressing what has happened.”

Once you install the application on your phone, it will have the user input three (3) emergency contacts, in the event one of them is unavailable during a potential incident. Once they are entered, the bracelet through the application, sends an SMS confirmation to those contacts, letting them know they have been chosen as an emergency contact. This of course, requires those contacts to install that application on their phone, but nothing else.

In the event they are pinged for an emergency, they are able to immediately open the app, pinpointing their friend/victim’s precise GPS location along with a live-stream of the audio recording from the on-going incident.

As a practicing criminal defense attorney, I presented them with the following scenario, which is common amongst domestic violence clients:

Hassini: “For those women who are regular victims of domestic violence, more often than not, you feel the violence coming; you can smell it. At this moment, you can either click or press the bracelet; in the event you don’t have your bracelet on, you can tap on the back of your mobile phone. It is meant to be very discreet, because we have to.

Once the victim triggers the signal, it is sent to your emergency contacts with an SMS message informing them that you are in danger. They can then actually hear what is happening through a live, audio recording, along with your precise GPS coordinates.”

In terms of data storage, all the recordings and information are stored on the company’s secure server out in France.

As a victim, if you’ve lost your phone or had it stolen, you can send the company an email or call them, claiming your phone through the company’s verification process. Once verified, the company is able to send you the victim the audio recording that was originally taken from the reported incident.

Evidence of a Crime

For legal practitioners, this could come in handy, as these audio recordings are able to serve as actual evidence of a crime that has taken place or is currently taking place. While French law differs from U.S. law, especially in regards to the Rules of Evidence, one fact remains true between both—no matter what, the audio recording must be authenticated by the local authorities and the courts.

Currently, the company has been in discussions with the French government about incorporating this into their rules and/or practice of law as a form of admissible evidence.

I asked N’Diaye and Hassini about authenticating the recording:

“Once you go before the police, you can provide them with the recording, and they are able to listen to it, and give their stamp of approval, incorporating their observation of the recording into their official police report; this helps to ensure its authentication in preparation for legal proceedings.”

Challenges Along the Way

While already implemented abroad, the company told us their biggest problem is funding.

“When you are a female and have these kinds of ideas, people think it’s great, but it is very hard to convince them to place their money on you to help make a difference,” said Hassini.

“This is technology for good, but many people only take for money, regardless of the cause. We don’t aim to provide this just for money; we want a better world. Our goal within a few years, is that when a young girl or woman decides to go out, they will put on her shoes and that bracelet, out of habit.”

The bracelet is extremely stylish, coming in an array of colors, as well as providing its wearer to shower and sleep with it. Upon a 40 minute charge, the bracelet can last as long as two (2) months, again depending on how often it is used.

As an attorney, I’m constantly helping clients fight through instances of domestic violence, with no real solution outside of separating them from their assailant and enrolling them in a treatment or program that aims to work with them.

This has the potential to help save thousands of lives and spirits of women across the world.