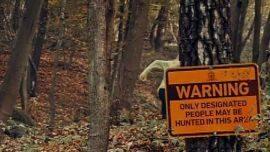 Universal Pictures has chosen to pull the marketing for its new movie, “The Hunt,” in the wake of three mass-shootings that have terrorized America in the last week. The film, which stars Betty Gilpin, Emma Roberts, and Hilary Swank, tells the story of a terrifying reality where the elite hunt and kill the poor for sport. In the wake of rising gun violence in America, Universal has halted all marketing and promotion of the film as of Wednesday. It is currently set for release on September 27. But reports claim that the company may consider moving the release date as well.

Film Aimed At Fans Of The Purge

Like “The Purge,” the story in “The Hunt” depicts a political and socioeconomic landscape in which the elite are given the opportunity to hunt and kill the poor for fun. The film surrounds twelve strangers that are kidnapped and wake up in a field without any idea of where they are or how they got there. The twelve soon realize that they’re all average people from around America and figure out that they’re being hunted by the rich in a game. The rich, gathered in a building called Manor House, are given the opportunity to hunt the poor (or “deplorables” as they’re called in this movie).

When one of the deplorables (Betty Gilpin) figures out the premise of the sick game that the rich are playing, she fights back and bands together with the others to kill off the elites one by one. There’s a lot of gun violence in the film, and it aims at making a statement on the gun-happy American culture. The film was being advertised heavily on television until last week when networks began pulling the ads in the wake of a deadly shooting in Gilroy, California at a food festival that left four dead, including the gunman, and 13 injured.

Later that week, two more shootings took place in El Paso, Texas and Dayton, Ohio that left 31 dead and dozens injured. The shootings terrorized Americans across the country, resulting in things like a mob in Times Square after a motorcycle backfire was mistaken for gunshots. Authorities revealed that the El Paso shooting was racially motivated, causing latin countries to respond to the attack by warning travelers to exercise extreme caution when traveling into and around the United States.

ESPN chose to pull advertisements on “The Hunt” in the wake of the Gilroy shooting, and Universal confirmed that it would be halting all marketing on the film until further notice. “Out of sensitivity to the attention on the country’s recent shooting tragedies, Universal Pictures and the filmmakers of ‘The Hunt’ have temporarily paused its marketing campaign and are reviewing materials as we move forward,” said a representative for Universal Pictures earlier this week in a statement that was first reported by Huffpost. The film is set to be released on September 27.