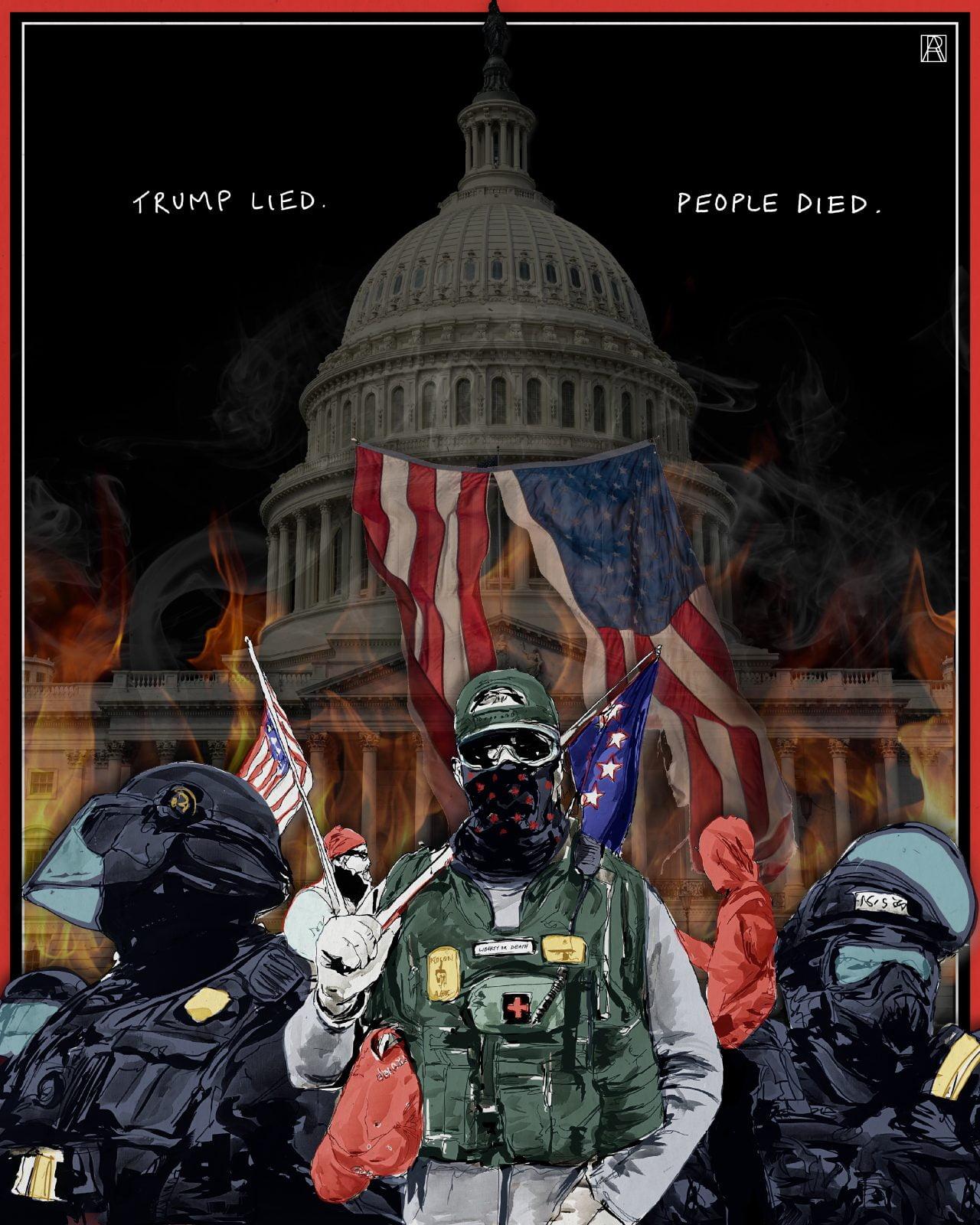 United We Stand, Divided We Fall.

Story and Art by: Alex Rudin

In light of the catastrophic year that was 2020, 2021 looked hopeful. However, within the first week of the freshly minted new year, we witnessed the violence and chaos of domestic terrorism. A mad mob of conspiracy fed seditionists vandalized their way through our Capitol, the fulcrum of our democracy, incited by none other than the sitting president of the United States. The crisis at the Capitol is not only unprecedented but underscores the deep philosophical and political divisions within the country methodically fanned by this administration. Let it act as a dangerous warning for our future. The foul display of white supremacy and fascist ideology bolstered by the wholesale falsification of facts begs the real and very sobering question; what now?

It is paramount to remember that this week’s events did not happen in a vacuum. Years of GOP groundwork in conjunction with the tumultuousness of 2020 has given us a front-row seat to our current political horror show. In reflection, 2020 has been a year of inarguable tragedy. However, it was and must remain the beginning of our societal transformation. We collectively straddled a world between isolation and connection, hope and despair, postponement, and reckoning. If nothing else, this past historic year has reminded us that with struggle comes the opportunity for growth, change, and creation… if you let it. “They always say time changes things, but you actually have to change them yourself.”[1] A startling reminder that we are in control of our future both individually and collectively. We must not allow division and violence to storm the chambers of our hearts, nor our nation.

As the world pauses, the very real dangers we all face continue to unfold with clarity. The bloody mess that was 2020 is seeping into the fabric of 2021. Cries for racial justice continue to touch the conscience of the American people. Climate change’s incendiary winds steadily blow. The wearing of masks has become a polarizing tool, dividing the American people and pitting science against politics in the battle against Covid-19. The president of the United States routinely refuses to acknowledge and/or accept responsibility, but rather denies, lies, and shifts blame.The global importance of what is taking place in the U.S. was and is pervasive. Allies and foes alike are watching. Can we contrive to be the leaders of the free world when we are in such disarray? Election 2020 was to be a reckoning. On the ballot: racial justice, women’s rights, climate change, science, healthcare, and ultimately our democratic institutions. A divisive choice between id and empathy. The people chose empathy, but on Wednesday we saw the violence of the ego.

While paralysis enveloped the world, my personal mindset began to evolve through introspection and action. In the throws of 2020, I discovered great purpose as an artist. In the darkness of lockdown, a window of opportunity began to open. In an age of disinformation and falsehoods, we must look to art for inspiration. A great history of image makers and artists alike have molded the very heart of this country. From Rosie the Riveter to the posters of Emory Douglas, to Kara Walker, artists have been the backbone of social change. Art allows viewers to connect, empathize, and feel on a deeper level through powerful imagery, symbology, color, and form. Effective art begs the viewer to contemplate, to sit in discomfort, and to confront. In an attempt to enter the conversation, I committed myself to make work about social change by dedicating my artistic voice to fight for human rights, equality, climate change, racial justice, and human decency.

The final months of 2020 brought some promise of a return to normalcy. However, it is evident that our fight has just begun. It is critical to concede that now is when the work begins. We are at a ‘precipice,” a tipping point for humanity as well as democracy. If we do not come together to fight the very real dangers we face on so many levels, what hope is there for tomorrow? As a committed advocate for progress, I am equally convinced that unity is the only way to overcome our obstacles. However, it is pertinent that before unity comes accountability. The flagrant display of sedition at the Capitol must have consequences. Our president and the fringe GOP leaders who stoked this fire must be held responsible for their actions. If we allow our democracy to be trampled upon, the American experiment will have been lost forever. We must stand strong in the face of misinformation, violence, and insurrection. This is first and foremost. Next, we begin walking down the path of Unity. We must reject the idea of the “other” and learn to embrace those with differences. “We cannot be separated in interest or divided in purpose. We stand together until the end.”[2] The problem is, the end is seemingly a stone’s throw away.

Alexander the Great once proclaimed, “Remember upon the conduct of each depends the fate of all.” The contributions of all citizens to the unification process will begin to put America back on the map advocating for a new ideal of progress, adaptation, and reconciliation. In an attempt to galvanize people around the idea of unity, I created a small series of inaugural unity posters to address key aspects of society and government that are in desperate need of rehabilitation.

The Senate’s inability to work together has all but failed the American people who so desperately need the system to work in their favor. While Mitch McConnell continued attacking the welfare of the American people, food insecurity statistics skyrocketed. The fight for corporate interests prevailed as The People continued to lose their jobs. As the powers that be turned a blind eye to schemes to undermine the results of the election, American people continue to die. Our former senate majority leader was a power broker undisturbed by the fate of American citizens suffering at the hands of bipartisan neglect. Yet, in the wake of it all, Georgia was able to organize and deliver the Senate to the Democrats. The results of the two Georgia Senate runoff races proves to us that our future lies on the side of hope rather than despair, of inclusivity rather than division. We must take great pride in the fact that Georgia is now represented by two minority senators. Georgia is officially purple and along with it comes hopes for a new American ideology. One of tolerance, and civic responsibility. One of progression and equity.

2020 has so aptly taught us that in regard to governmental efficacy, unity is strength, and division is weakness. We walk into 2021 with the hopes that our newly elected officials will put down the boxing gloves and extend their hands in an effort to protect and serve us. We the people have successfully elected the candidate who proudly promotes “reaching across the aisle.” That was the platform we chose, and that is the future we must demand.

Additionally, we must come together to overcome Covid-19. The impacts of Covid continue to boggle the mind. Every day — another 9/11. 350,000 lives in a mere 9 months. We are on target to lose more American lives in one year of Covid-19 than the entirety of World War II. The reason we find ourselves at this juncture? Division. The only way to get ourselves out of this mess? Unity. Think of Covid-19 as the war, the vaccine — our D-Day. We must all do our part to change course. Like wearing a mask, taking the vaccine is not a political act, but an act of love. Protect yourself to protect others and to protect our country – patriotism at it’s best.

“Unity can only come where there is mutual understanding in society… no friction of thoughts and clash of ideologies.”[3] While a logical mind very easily comprehends that we do not exist in such a blissful state, it is defeatist and against our own interest to relent to the concept of division as our only path. As individuals, we must join as one. We must learn to appreciate the similarities that brought us to this country and celebrate the differences. We must accept the liberties and rights of all men, women and children as equal. We must learn to respect human rights as a fundamental pillar of our society.

One would like to believe that in 1776 when Thomas Jefferson wrote the Declaration of Independence, that he intended for “life, liberty, and the pursuit of happiness,” to be a constitutional right for all citizens. As we awake from the slumber of privilege and entitlement, we come to realize that Jefferson’s promise of the American dream is an inaccessible fantasy to the sweeping majority of America’s people. White privilege is foundational to the American system, as was clearly evidenced during the events of January 6th. However, we must dedicate ourselves to addressing this injustice. Through collective acknowledgement, reform, education, action, and genuine allyship we can right this fundamental wrong. Through unity, we can transcend antiquated ideals and bigoted sentiment. Through unity, we can renew, and we can also protect. If we act out of love, think about our neighbor, and reject the notion of othering, we can build anew. Nearly 2500 years later, Aesop’s words ring truer than ever, “United we stand, divided we fall.” In order to avoid the dissolution of the American experiment, we must actively choose the path of unity in all ways, always.

Alex Rudin is a multimedia artist based in New York City. Her artwork is narratively focused with a strong emphasis on Fine Art’s craftsmanship. The majority of her work attempts to comment on the complexities of the human psyche through stylized portraiture and anecdotal commentary. Her focus lies in uncovering and expressing the truths of what it is like to live in 2020. Alex is currently focused on creating political work, partnering with campaign organizations, and creating work surrounding social issues. She has shown in both solo and group exhibitions in New York City, Great Neck, Delaware, Philadelphia, and the Hamptons.