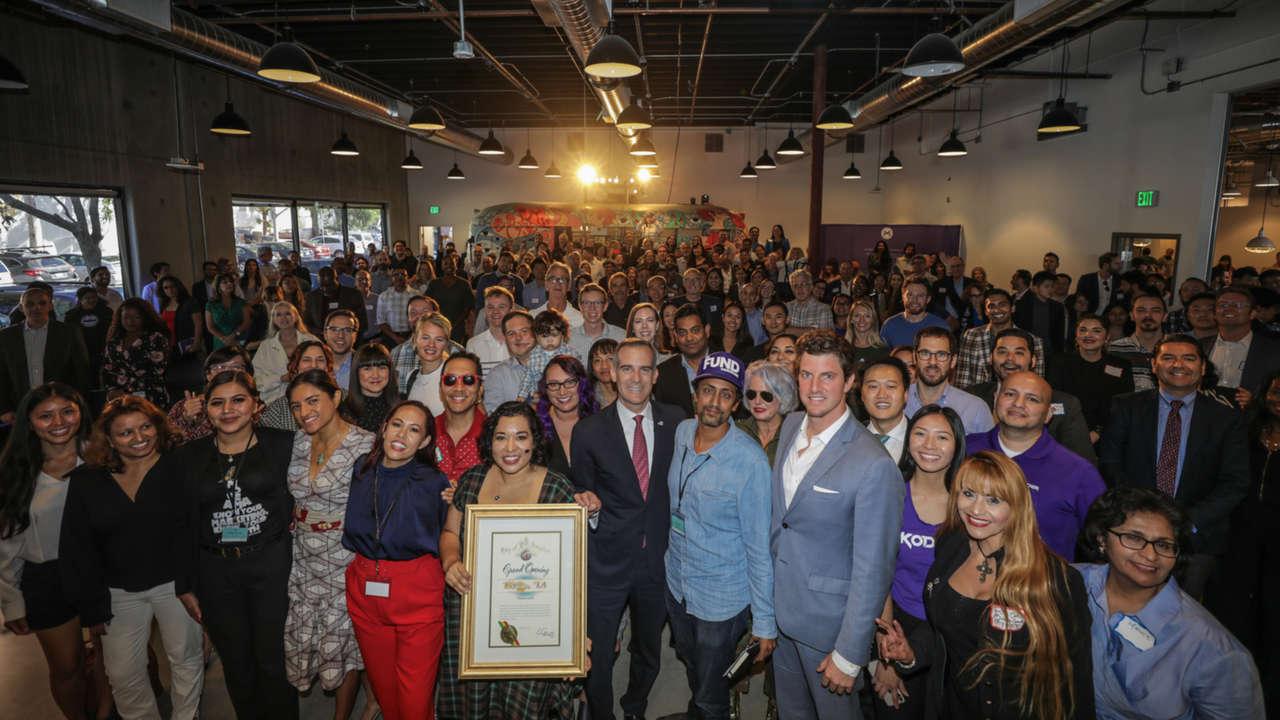 American manufacturing is dead — or so we thought.

In an era when WeWork has boomed to a recent valuation of $47 billion with locations in 32 countries, it would be logical to assume that the future of modern work is purely remote, contracted out, and fulfilled on laptops and devices.

Yet, tucked in the San Fernando Valley of Los Angeles is a well-kept, albeit well-connected secret co-working space that focuses on much more than fast wi-fi and free beer (just ask LA Mayor Eric Garcetti, who attended their high-profile grand opening in October 2018).

An innovative twist on co-workspaces

Calling Toolbox LA a “co-working space” is only fair as a shallow introduction. More aptly described, it is a one-of-a-kind makerspace startup ecosystem. While that may be a mouthful to say, it’s equally as much of an eyeful to behold.

Toolbox LA is brought to life in an expansive, two-story building comprised of areas specifically designated for each phase of the assembly line of a modern manufacturing startup.

Its ultimate goal is to be a comprehensive, self-sustaining community focused on high-concept hardware and software companies. Think endeavors like autonomous robots, AI wall outlets, and providing an environment for STEM-oriented entrepreneurs and startups to grow and succeed in (a welcome pursuit in the face of a continuous shortage of STEM skilled workers in the U.S. ).

Imagine a scaled-down Home Depot where you can use all the machinery and tools without buying them and you have a good picture of their workshop space. Located conveniently next to the workshop is another area of designated private studios for artists, engineers, and the like who are regularly getting their hands dirty.

Need something 3D printed? SD3D, a 3D printing company that provides its services at commercial and industrial scale, will happily produce a prototype for members with their onsite printer. Mind you, all of these hands-on areas are on the first floor, not only for easy access but also because Toolbox LA is born with an engineer’s heart.

The seeds of a start-up ecosystem

The idea of Toolbox LA was conceived of and brought to life by the partners of Make in LA, an accelerator and venture capital firm for hardware startups. While they work globally, 60 percent of their funding goes to hardware and software startups based in LA.

Raychel Espiritu, Community Director for Toolbox LA, has worked with the founders to bring that vision to life since 2017.

“It’s a vision from Shaun and Noramay to have a bigger ecosystem for entrepreneurs,” Espiritu said. Both Arora and Cadena have engineering backgrounds.

In partnership with companies that they had existing working relationships with or helped scale — SD3D, hardware manufacturer NEO Tech, biotech incubator LabLaunch, and IoT software company breadware — Make in LA has realized their vision within the Toolbox LA space.

So far, most of their membership growth has come from high-level word of mouth. Part of that stems from Make in LA’s existing network, but Toolbox LA has also benefited from mentions from LA Chamber of Commerce and other local government officials made aware of the space at its official launch. As it turns out, it does help to know the Mayor, especially when your efforts go towards bolstering the local economy.

Not all about hardware

The second floor of Toolbox LA is where the other half of business makes their bed (or desk, rather). The open floor plan upstairs is filled with marketers, web designers, programmers, and social media experts who will gladly help those engineers downstairs in the trenches craft the front facing side of their businesses.

While the end goal may be to create successful hardware companies, Toolbox LA is open to all types of professionals and startups with the understanding that specialists from all disciplines are needed to make the concept of the space excel.

“Being around people that are very solutions oriented can help you figure things out,” Espiritu said.

Toolbox LA has also partnered with area schools like California State University to enable young entrepreneur-minded engineers to bring their ideas to life. One notable program they run is “the bull ring” — a Shark Tank-esque session where students gain practice pitching their prototypes and ideas to each other.

A bright future for co-working

It’s hard to imagine the dynamic blueprint of Toolbox LA not being reproduced in the near future, as start-ups and lonely remote workers alike search for a sense community and infrastructural support that the traditional office once provided.

Until then, Toolbox LA continues to support their growing local San Fernando Valley community with eyes on eventual expansion to other potential markets, like NYC and Oakland.

American manufacturing as conceived in the 1970s is in decline, but initiatives like Toolbox LA may just be the engineering feat we need to revive a version of it fit for the future.