After kicking off the discussion around AR enablers by examining companies like 8th Wall, we now transition into AR hopefuls, starting with Tilt Five. The company shows strong design principles and pedigree. Here’s a closer look at what got them here and what they’ve been up to.

An AR industry rally cry over the past few years has been the concept of “AR everywhere.” That principle embodies the AR cloud, explored earlier in this report. But when talking about the practicality of AR today, should it be less everywhere and more about AR somewhere?

This is a core principle behind Tilt Five. Its Kickstarter-backed AR gameboard works in tandem with glasses and a wand. It also serves as an open platform for developers and game partners to build AR games that are stationary but high-quality and user-friendly.

“I love the systems that are ‘AR anywhere.’ Those are really cool but they have limitations… We decided to do AR somewhere,” said the always-insightful Tilt Five CEO Jeri Ellsworth on a recent episode of the tech reviews show Projections. “We can just nail that and make it perfect.”

AR glasses often involve a tradeoff between several specs that are key considerations for “anywhere” operability, such as bulk versus performance. Tilt Five’s stationary approach conversely engenders design leeway to sidestep some of these common challenges.

“The system is super lightweight, it’s just 85 grams. It just folds up and slip it on,” said Ellsworth. “Our main objective is to have a system where you fold the game board out, slip the glasses on, and just get right into the fun… No calibrations, no complicated setup, no sensors in the room.

Of course, to achieve that level of user-friendliness and hardware efficiency is more complicated. Tilt Five’s proprietary technology utilizes a retro-reflective gameboard which works with onboard glasses optics to achieve realistic AR interactions and depth.

This is what really makes it “AR somewhere” because AR glasses otherwise can’t practically utilize customized surfaces out in the world, per Matt Miesniek’s comment earlier in this report. But purpose-built for a stationary experience, Tilt Five was able to solve common AR challenges.

“Our system is kind of unique compared to others,” said Ellsworth on Projections. “[It] actually projects out to a special game board which is called a retroreflector and that allows us to make the headset really high-performance, lightweight, and super-wide field-of-view.”

Tilt Five’s go-to-market strategy is built on a platform approach that invites developers to build experiences. This will be key to populating the experience with a range of games that tap into developer creativity. We’ll see everything from card games to tower defense to RPGs.

“Many of them will be on PC and Android,” said Ellsworth. “Just go to Google Play or Steam, download the game and you’re good to go… We have a bunch of games that are going to ship with the system which are party action games […] Then we have some solo play experiences.”

Dungeons and Dragons-type games will also be fitting. In fact, Tilt Five has partnered with IP holding company Fantasy Grounds to port its licensed titles, which represents a key partnering aspect of its go-to-market strategy, in addition to open community development.

Importantly, the Fantasy Grounds partnership brings in an existing and avid user base. It will also operate across platforms so Tilt Five users can play with non-Tilt Five users. This is smart to allay compatibility barriers, while also exposing Tilt Five to potential converts on other systems.

As for a launch timeline, the project completed its Kickstarter, quadrupling its set goal and raising almost $1.8 million. Its plan was to distribute hardware to the first backers in Q1, but manufacturing has been slowed down by the global Coronavirus outbreak.

Boiling Tilt Five’s story down to a few discernable lessons, the first thing that sticks out is product focus. Instead of going after too many markets. Tilt Five’s strategy is and has been to zero in on nailing a specific experience. And that starts with socially-oriented tabletop gaming.

“In the hype cycle around AR, I think too many people expect one singular product that does a bazillion things,” Ellsworth said at a Samsung NEXT meetup. “It has my location in real-time, 3D maps, it understands every object in the scene, voice recognition and AI…This is too much. Technology never launches that way.”

Tilt Five has likewise deviated from many companies selling XR hardware by focusing on the user experience rather than tech specs. Eschewing the common specs arms race is one of the factors we attribute to the success of Tilt Five’s Kickstarter campaign mentioned above.

The strategy is also to make the product approachable by meeting users halfway with AR integrations that enhance something that’s already familiar – In this case a board game format. This is the “training wheels,” concept that has historical parallels in the iPhone’s evolution.

“We take for granted that one day we woke up and there was this really great phone in our pocket, but there was a lot of evolution along the way,” Ellsworth said at Samsung NEXT. “In AR and VR, we’re going to do [that], and our user interfaces are going to be constantly changing.”

Related: Which Mobile AR Formats Get Used Most? 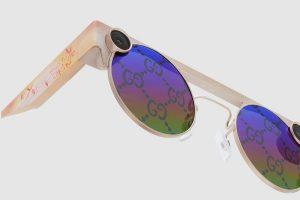 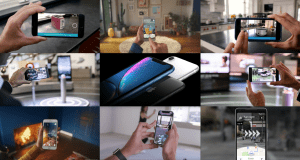 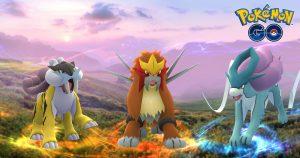 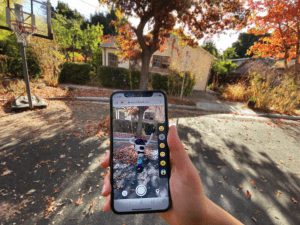