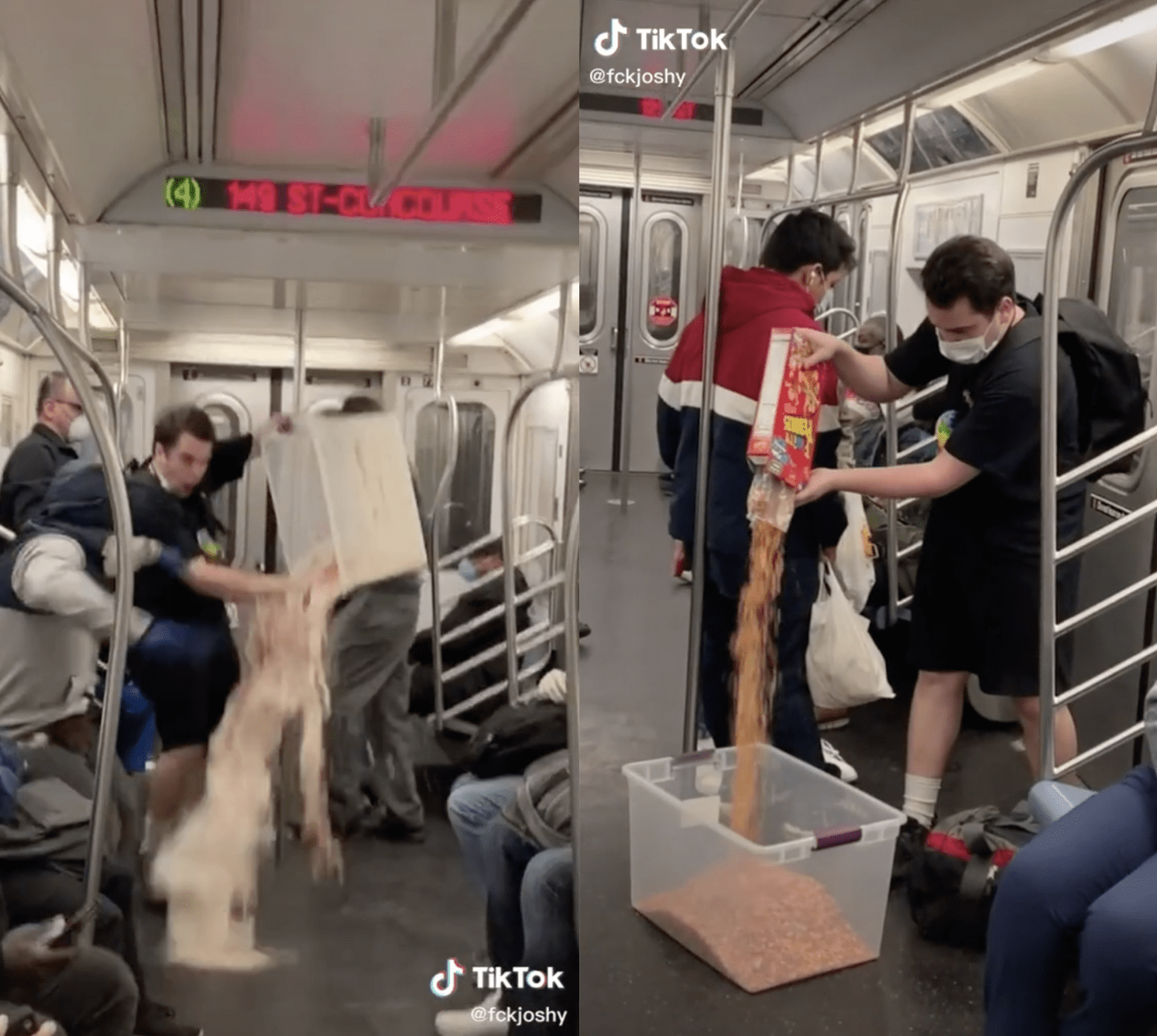 A TikTok User Pulled A Prank On The Subway, Now He's Under Investigation By The NYPD

It’s incredible to see just how far people are willing to go to gain clout on social media networks like TikTok, Twitter, and Instagram, where algorithmic responses to likes and shares are designed to catapult people into instant fame. A recent TikTok video went viral this week for the wrong reasons, and now the maker behind the video is under investigation by the NYPD after being condemned for his actions on social media sites.

In the video, a TikTok star that goes by @fckjoshy is seen carrying a storage bin full of cereal and milk onto a crowded subway train (crowded by pandemic standards, not regular standards). As a prank, he drops the entire bucket of cereal and milk all over the ground in the moving subway car, disrupting commuters and covering the train in food.

@fckjoshy, a TikTok star with 3.3 million followers on the platform, gained notoriety for posting videos of himself doing things like destroying furniture on the streets of New York City or climbing on cars stuck in traffic to make a scene. The cereal prank was not out of character, but was by far the most destructive prank on the TikTok stars’ page.

Some people recorded the prank on their phones, others ran away from the mess as quickly as possible. In the midst of the coronavirus pandemic, most New Yorkers have been told to avoid public transportation unless they absolutely need to use it for work purposes, meaning that most commuters on the MTA at this time are essential workers and those that have no other option.

People on social media almost immediately started sharing the video to condemn the prankster for both wasting food and insulting essential workers by both annoying them and creating more work. Some condemned the prankster for his insensitivity to the people that are on the subway at this time, and others pointed out that the prankster chose to waste food on something so useless during a time when so many worry that they’ll go hungry.

As a result of the prank the MTA posted to its own twitter account to condemn the TikTok-er for his actions. The company, which has been shutting down its services between 1 and 5 am to sanitize trains, called the act “despicable.” The tweet got over 44,000 likes on the platform and both the MTA and the NYPD are apparently looking into the prank after it got so much attention online.

In a time when so many are impacted negatively by the coronavirus pandemic, communities are finding that the only way to show appreciation is to come together to look out for those that have to be out and about. Maybe next time @fckjoshy can donate the cereal and milk instead.