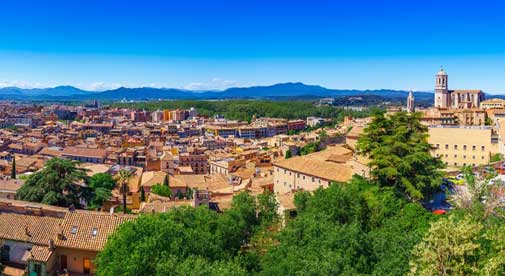 Things To Do In Girona, Spain

Sun, sea, and sand are usually the top reasons that people choose Spain for their retirement destination, but what if you could also have mountains and snow, hot spas, medieval towns and villages, vineyards, art and culture, and beautiful landscapes? In the Province of Girona, in the north-east corner of Catalonia, you can find all of these things.

This region is a sort of triangular shape with one side following the French/Spanish border from Andorra to the coast. The Costa Brava, from the French border down to the southern point of the region at the tourist resort of Blanes, forms another side. The city of Girona is the capital of the region with Figueras (famous for the Salvador Dali museum) being the other major town.

When I lived in a small village 45 minutes north of Barcelona, I spent many a weekend exploring this region and also spent a few longer holidays on the Costa Brava. I fell in love with this area and my partner Andre and I are seriously considering it for our retirement in a few years’ time.

So what is it that draws me to this varied region?

Although it does have a few larger tourist resorts such as Blanes, Roses and Lloret de Mar, the Costa Brava still has many undeveloped, pretty little fishing villages with white-washed houses such as the bays of Calella, Tamariu, and Llafranc at Palafrugell.

Some of the larger coastal towns, such as Tossa de Mar (pictured below) with its castle and cobbled streets, still retain a lot of character too.

The tiny, medieval coastal village of Sant Marti d’Empuries is one of my favorites, and of course, we mustn’t forget Cadaqués, the home of Salvador Dali and popular with many other artists such as Picasso and Marcel Duchamp.

Inland, there is lots to see and do. The landscape is dotted with so many medieval towns and villages, it would take you several years to get round them all. Notable ones to start with include: Begur, Besalu (below), Castellfollit de la Roca (perched on the edge of a cliff on all sides), Pals, and Peratallada. Imagine living in a little town house in one of those villages. It would be like stepping back in time.

The area of Empordà is where you’ll find the region’s 2,000 hectares of vineyards and many wineries where you can sample the wares. While you’re in Empordà, it’s also well worth visiting the town of Bisbal which is crammed with shops full of colorful ceramics from all over Spain.

One of my best ever holiday memories was lying in a swimming pool of hot, natural spa water at night, looking up at the moon. It was in the winter, so it was freezing getting in and out, but utter bliss. There are several of these hot spa towns south of the city of Girona, such as Caldes de Malavella, Santa Coloma de Farners, and Sant Hilari Sacalm.

As you get towards the foothills of the Pyrenees, the landscape is dotted with ancient masias or farmhouses and there are more gorgeous historic villages, such as Camprodon with its beautiful 13th century bridge over the River Ter.

And finally, you can even go skiing in the region as it has its own ski resorts at La Molina, Vallter 2000, and the Vall de Nùria.

There are many different climates in the region depending on where you choose to be. The winters can be cold in some areas especially in the north of the Costa Brava where you get the notorious Tramontana wind which blows off the Pyrenees. But, like the rest of Spain, you get long, hot summers and plenty of sunny days all year round.

Another great advantage of this area is how well it is connected. Girona airport has flights to many European destinations. It also has a high-speed train link to Paris. Barcelona is only one hour 15 minutes away from Girona and it’s really easy to drive across to France too.

All in all, this is a region well worth considering for a busy and varied retirement.

The article Things To Do In Girona, Spain by Lesley Postle first appeared on International Living.