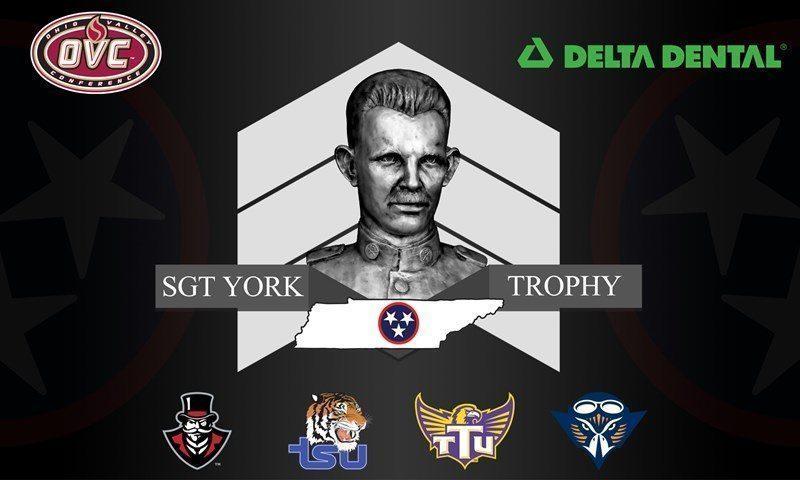 College football is full of countless rivalries and trophy games–and it isn’t always just between two schools. The Commander-in-Chief’s Trophy, the Beehive Boot, and the Florida Cup are all contested by three different schools. But there is another lesser known trophy series, one of only a few between four different programs.

This is the story of the Sgt. York Trophy.

The Sgt. York Trophy was named for World War One hero Sergeant Alvin C. York. During the Meuse-Argonne Offensive, he charged ahead and almost single handedly captured 132 German soldiers, inspiring books, a movie, and a song. After the war, he returned to his native Tennessee and established the Alvin C. York Institute in order to provide more educational opportunities for the children of Tennessee.

The series was established in 2007 by the Ohio Valley Conference and Nashville Sports Council. The aim of the trophy was to hopefully create a strong in-state rivalry among the schools, since none of them have a major in-state football rivalry.

Austin Peay’s main rival is Murray State in Kentucky. Tennessee State plays Jackson State every year in the Southern Heritage Classic. Tennessee Tech’s main rival was Middle Tennessee State, but MTSU now plays in the FBS as part of the C-USA conference, while UT Martin hardly has a main football rivalry at all.

Future of the Rivalry

The Sgt. York Trophy has had some success, but isn’t quite a major battle just yet.

The rivalry has been competitive between the four schools, with each school winning the trophy at least once in the eleven years of its existence. Although the Golden Eagles of Tech have only won the trophy outright once, while Austin Peay has only held it twice. Even so, no sole team has completely dominated the series and APU is even the current holder of the trophy.

Looking forward, it will take time for the rivalry to seriously develop. But plenty of other rivalries have developed only recently. There is no reason the Sgt. York Trophy can’t become a major rivalry in the FCS in future years. It would take fan involvement, the schools supporting it, and media interest along with the rivalry itself staying competitive.

But if all that happens, we may just have a great new series on our hands.

Enjoy this piece? Read our sports, entertainment, and tech sections.