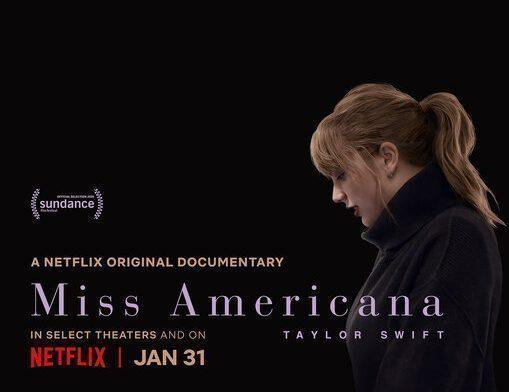 Taylor Swift revealed that her documentary Miss Americana will premiere this month.

The Netflix documentary will screen at the Sundance Film Festival on Jan. 23, and then it will be available on the streaming platform and select theaters on Jan. 31.

“In this revealing documentary, Taylor Swift embraces her role as a songwriter and performer- and as a woman harnessing the full power of her voice.”

Neither Swift, nor Netflix have revealed much information about the documentary.

All we really know is that it will follow the Grammy-nominated star’s life over the course of the last few years.

However, the title of the documentary, Miss Americana, might be a hint as to what it’s about. The documentary is named after one of Swift’s newest songs off of her “Lover” album, “Miss Americana & The Heartbreak Prince.”

The track’s description on Spotify says “the song is about disillusionment with our crazy world of politics and inequality, set in a metaphorical high school.”

The song’s chorus seems to reflect the singer’s past controversies.

“It’s you and me, that’s my whole world/ They whisper in the hallway, ‘She’s a bad, bad girl’/ The whole school is rolling fake dice/ You play stupid games, you win stupid prizes/ It’s you and me, there’s nothing like this/ Miss Americana and The Heartbreak Prince”

If Swift is the so-called “Miss Americana” she is talking about in the song, then the lyrics could be referring to society’s constant judgement over what Swift is or isn’t doing.

She also wrote that she “wanted [the song] to be about finding one person who really sees you and cares about you through all the noise,” on Spotify.

Therefore, calling the documentary Miss Americana might imply Swift is going to be disclosing a lot about her past struggles.

Fans first heard about the documentary when the feud among Swift, Scooter Braun and Big Machine Records was at its peak. This summer, Swift revealed that Big Machine’s CEO Scott Borchetta wasn’t allowing her to buy the rights to her music.

Then in November, Swift posted a message to her social media telling the world Big Machine also wasn’t allowing her to perform, or use footage of her old music. She revealed the news about her upcoming Netflix documentary as well.

“Additionally, and this isn’t the way I had planned on telling you this news, Netflix has created a documentary about my life for the past few years,” Swift said.

“Scott and Scooter have declined the use of my older music or performance footage for this project, even though there is no mention of either of them or Big Machine Records anywhere in the film.”

Big Machine replied stating that they never tried to “block her Netflix special,” and then in December, Variety reported that the record label cleared the use of Swift’s old music and performances for the documentary.