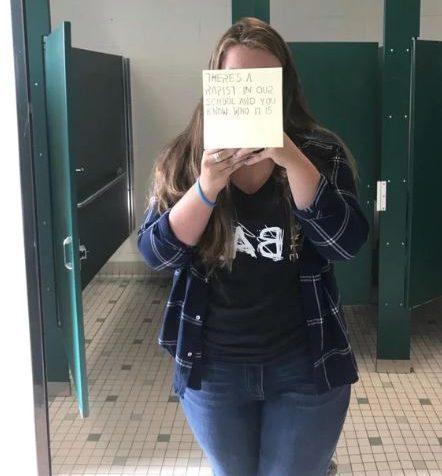 “There’s a rapist in our school and you know who it is.” Those were the twelve words posted by Aela Mansmann, a Maine high school student and two other students in the girls’ bathroom concerning an alleged rapist in the Cape Elizabeth school district.

Mansmann, 15, has been battling against the high school for a month following the posting of the note on grounds of…bullying? It has now become a federal legal issue.

As a result, she and two other students who left similar notes were ordered suspended. The concerning and almost comical response by the school district here is that they considered the notes to be “an act of bullying,” which created “a pattern of an intimidating educational environment.”

Shael Norris, on behalf of her daughter, Aela, has appealed the suspension, enlisting The American Civil Liberties Union of Maine (ACLU) to take on the case, requesting the U.S. District Court for the District of Maine to stop the suspension.

That same day, the ACLU filed its Motion for a Temporary Restraining Order along with a Motion for a Preliminary Injunction. Defendant’s response is due by Thursday October 17, while the plaintiff’s reply would be due the following day, on the 18th. Depending upon the necessity of a hearing, the hearing date is anticipated to be on October 21 at 10:00 a.m., and will be testimonial.

According to court documents obtained and reviewed by Grit Daily, made available by the ACLU and the PACER system, Mansmann has taken a “public stance as an ally for victims and survivors of sexual violence,” which Mansmann has indicated she plans to keep doing.

Mansmann is a student ambassador for SafeBAE, a national organization dedicated to addressing sexual violence in middle and high schools, and she is the Maine state director for March For Our Lives, a student-led anti-violence initiative.

The complaint also states that Mansmann served as a moderator for a speech by Presidential candidate Pete Buttgeig, and she was a presenter at the HALT and Every Voice summit at Harvard Graduate School of Education. She has been nationally recognized for her activism by U.S. Cellular as one of “16 under 16” in 2019, using the $10,000 from that award to help fund a student-led conference on sexual assault in schools, called Consent: The Way Life Should Be, which was attended by approximately 750 students.

“I think anyone that has experienced any sort of sexual violence or harassment is especially vulnerable when they are going through their healing process, and to have an ally who is willing to advocate for that, I think is crucial and beneficial,” she said in a telephone interview.

From Mansmann’s perspective, the high school hasn’t taken allegations of sexual assault seriously enough, so she and the two other girls took matters into their own hands to help spread awareness and provide an avenue for individuals to come together.

The complaint states that back in June, she and two other CESD students raised their concerns about inadequate responses to sexual violence to the CESD school board, telling it that the district has no policy describing how to report sexual harassment and assault, and she asked that the board work with students on a comprehensive policy that would encourage reporting and support students who self-report sexual assaults.

Furthermore, the complaint alleges that they also raised concerns that victims are not informed about the outcomes of investigations, and they complained that some faculty members were not complying with the mandatory reporting requirements involving potential sexual assaults. They asked that the school district provide trauma-informed training sessions to all staff covering the intersections of Title IX and mandated reporting specific to the State of Maine.

But according to court documents, the school board never followed up with Mansmann about working with her and the other students at the board meeting to improve school policies. This led to her taking her activism in a new direction, looking to other channels of communication, beginning with her September 16 note:

“There’s a rapist in our school and you know who it is.” Per the complaint, she placed this note, a modern-day leaflet, in the second-floor girl’s bathroom at CEHS and took a picture of herself standing in front of it. The note, however, did not specifically mention any student or individual, simply referring to the school administration as “you” to grab its attention.

The School District’s Attempt At Classifying Rape-Awareness As “Bullying”

In a matter of minutes, another student entered the bathroom, removed the note, and took it to the administration, along with the removal of other notes.

The school’s principal, Jeffrey Shedd, said in a letter to the community Wednesday that a male student believed he was the target of the note campaign, and that he felt unsafe at school in the wake of the notes. I’m not sure how these notes can lead one to feel unsafe absent the already concerning allegations of rape spreading throughout the district.

In issuing the suspension, the Defendant/principal of CEHS told Mansmann that her post-it note created “a pattern of an intimidating educational environment.”

In a letter to she and her parents, the CEHS principal and assistant principal stated that they have found that “the actions of students writing or posting notes in our school bathroom did in fact constitute an act of bullying within our policy. Specifically, it was part of a ‘pattern of…expression…directed at a student…that [created] an intimidating educational environment…or [interfered] with the student’s…ability to participate in or benefit from the services, activities, or privileges provided by the school.”

The ACLU argues that the notes left in the girls’ bathroom by Mansmann and other students did not target a specific student, and therefore was not “direct speech” that would constitute bullying. Rather, they were First Amendment-protected free speech, meant to start a conversation at the school about sexual assault. The ACLU calls this pending suspension an inappropriate attempt to silence a student who was trying to start a conversation about important issues at the school.

This case not only brings up serious First Amendment concerns, but in the event accusations are true, shows the ineptitude and inexperience of any school district to identify and distinguish forms of bullying.

The school district’s anti-bullying policy (Policy JICK, “Bullying and Cyberbullying Prevention in Schools”) states that, “bullying” has the same meaning in this policy as under Maine law.

“We all know by now that students’ free speech rights don’t end at the schoolhouse gate,” said Emma Bond, staff attorney at the ACLU of Maine. “The anti-bullying law was meant as a shield to protect students who are being targeted and harassed. It was not meant to silence students speaking up about difficult topics.”

Under Maine law, bullying is defined as:

“a written, oral or electronic expression or a physical act or gesture or any combination thereof directed at a student or students that:

2) Interferes with the rights of a student by: a) creating an intimidating or hostile education environment for the student; or b) Interfering with the student’s academic performance or ability to participate in or benefit from the services, activities or privileges provided by the school; or

As pointed out in plaintiff’s complaint, there are many ways that actions can constitute bullying, but all of these only apply to actions that are “directed at a student or students.”

As an advocate against bullying myself, this case struck my differently than most. Grit Daily reached out to Ms. Bond on Wednesday and had an opportunity to speak with her on Thursday about the pending litigation.

According to Ms. Bond, based off current findings, the ACLU isn’t aware of any other cases it has handled in which a student was suspended after sounding an alarm about sexual abuse. However, there have been other examples where student’s have been disciplined for raising concerns about teachers inappropriate relationships with students.

“One example was out in New Hampshire, where a student raised a concern about an inappropriate relationship involving a teacher and another student. That student was temporarily suspended based on allegations of defamation.”

However, other school districts in the country have grappled with how to handle sexual assault allegations as the #MeToo movement grows in influence, as outlined by the Cincinnati Enquirer.

Unfortunately, the Cape Elizabeth school administration has a history of complaints under Title IX of the Education Amendments Act of 1972, where the school had received at least ten complaints in the previous year. Of those complaints, five of them were substantiated.

Mansmann did not allege that she was a victim, nor did she mention any accusers or abusers by name. The two other students suspended from the school, about 6 miles south of Portland in one of the wealthiest communities in Maine, have not come forward publicly. The suspensions led about 50 students at the 550-student school to walk out of classes one day this month

“I definitely am ashamed to say I go to Cape Elizabeth High School with this being their reaction,” Mansmann said. And who’s to blame her?

“The First Amendment protects student speech and prevents school administrators from chilling students’ right to speak out on important social and political issues. If A.M.’s suspension is upheld, students across the country will be chilled from speaking out about sexual assault in their schools, for fear of being disciplined.”

The high school has agreed to delay Mansmann’s suspension until the October 21st hearing.

According to the National Sexual Violence Resource Center, one in four girls and one in six boys will be sexually abused before they turn 18 years old. One in five women are sexually assaulted on college campus, and more than 90 percent of them do not report their assault. Overall, nearly two thirds of sexual assaults go unreported to police.

Court: US District Court for the District of Maine (Portland)

Published in Health, Health and Wellness, Legal and News