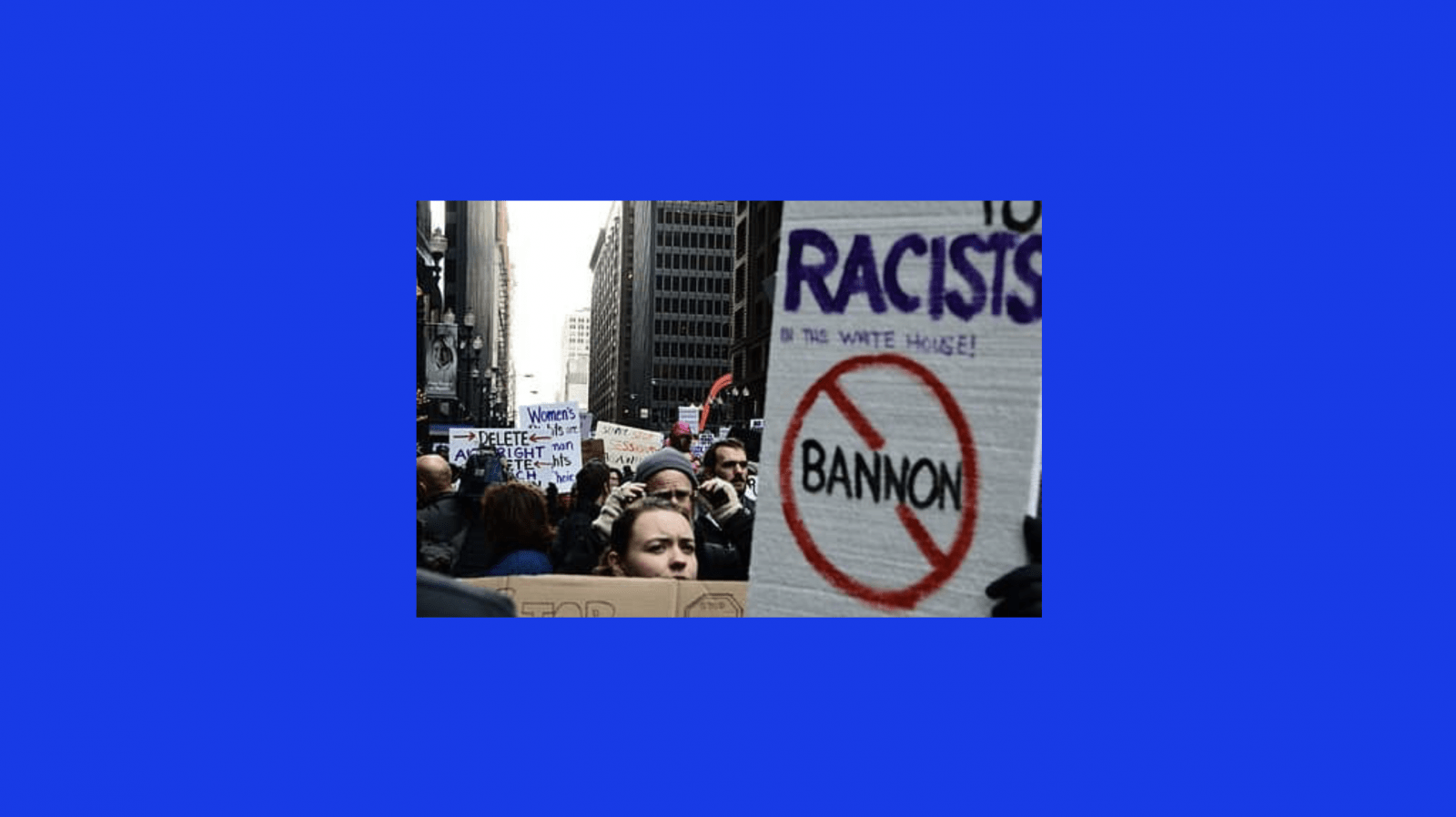 At this point in our current timeline it feels almost exhausting to keep up with the endless news about Steve Bannon. The former-Trump adviser has a long history of controversy going back even before President Trump got into office. Now, after Bannon caused trouble on social media during Election week when he called for the beheading of Dr. Fauci, the news about him is running faster than ever. Here’s everything you need to know about Bannon and his controversial role in the Trump Administration.

Bannon’s political career gained traction back in 2012 when he became the executive chair of Breitbart News, a far-right media platform that has a reputation for publishing some questionable takes on major news topics. The media company, which speaks to a generation of conservatives that might push back on traditional Republican views, appeals to a sort of ‘new age’ anti-establishment conservative. Bannon has since stepped down, but played a major role in canonizing Breitbart into what it is today.

After becoming the chief executive officer of the Trump Campaign in 2016, Bannon used his former ties with the U.K. data firm, Cambridge Analytica to boost the campaign on Facebook (Bannon stepped down from his position in the company after starting work with the Trump Campaign). Through the data firm, Bannon played an integral role in the mining of data from over 50 million Facebook users in what would become one of the biggest tech scandals of all time. The data mining practice, in which whistleblower Christopher Wylie says Bannon played a heavy hand at, led to major shifts in power around the globe. Most notably was the Presidential win of Donald Trump and the Brexit referendum.

The 2018 Guardian exposé titled “‘I made Steve Bannon’s psychological warfare tool’: meet the new data whistleblower” chronicled Wylie’s experience working with Bannon at Cambridge Analytica. The company, which has since been disbanded, sparked a major upheaval of how social media is able to interact with legal systems around the world (which, to this day, no one can seem to figure out).

Bannon began working with President Trump as an adviser after Trump took office in 2016. He later left his position in 2017 after the Unite the Right rally in Charlottesville, Virginia, that saw white supremacist groups gathering en masse. Trump condemned the groups, but blamed ‘both sides’ for the rise of white supremacy in the United States—a move that allegedly came from advice given to Trump by Bannon. At this point, Bannon had been reinstated at Breitbart News until January 2018 when he stepped down from the company once again, this time after a book called Fire and Fury exposed some controversial things that Bannon had said about Trump. The whole thing could have easily been a teen drama, but it was our political reality.

News about Bannon had been pretty quiet for a couple of years after leaving the White House, a period during which Bannon began working abroad. It wasn’t until this past summer, when Bannon was arrested, that news about him started picking up once again. In August 2020 Bannon was arrested by the U.S. Postal Service while onboard a yacht in New York. This came at the perfect time, as the U.S. Postal Service was under attack at that same time by President Trump, who threatened to defund it in his nearly year-long attack on mail-in voting.

A friend of mine pointed out that the arrest was all very Arrested Development, especially as Bannon was also indicted on allegations of financial fraud much like George Sr. According to the indictment, Bannon misused funding from the We Build The Wall organization that was raising funds for Trump’s border wall between the United States and Mexico. Bannon allegedly funneled over $1 million from the organization to himself, where he used some of the money to pay off personal expenses. Here’s a pretty good explainer on the whole situation, and how the the Postal Service was able to conduct an arrest in the first place.

If you thought that would be the end of Bannon for quite some time, you would be sorely wrong. Not even arrest can keep him down. Bannon reappeared during Election week when he posted a link to his podcast on Twitter and Facebook that also called for the beheading of Dr. Fauci, who serves on the White House Coronavirus Task Force. A clip of the video was left on Bannon’s Facebook for several hours before being taken down, and in it Bannon claimed that Dr. Fauci’s head should be displayed on a “pike” on the exterior of the White House.

Twitter took the post down almost immediately and suspended Bannon’s account as well. Facebook, on the other hand, claims that Bannon did not violate enough of the platform’s terms and conditions in order for his account to be banned (Facebook’s terms and conditions explicitly say that hate speech and violent threats are not allowed). Reuters, which first reported the news that Zuckerberg will not be having Facebook suspend Bannon’s account, suggests that this demonstrates Facebook’s fear in upsetting conservative users by censoring them.

Bannon’s lawyers, who were working on his financial fraud case that was set for court in the Spring of 2021, stepped down from their positions defending him almost immediately after he made the comments on his podcast. AP News reported that William Burck, the lawyer, submitted a letter to a federal judge to let them know that he was stepping down from the case.