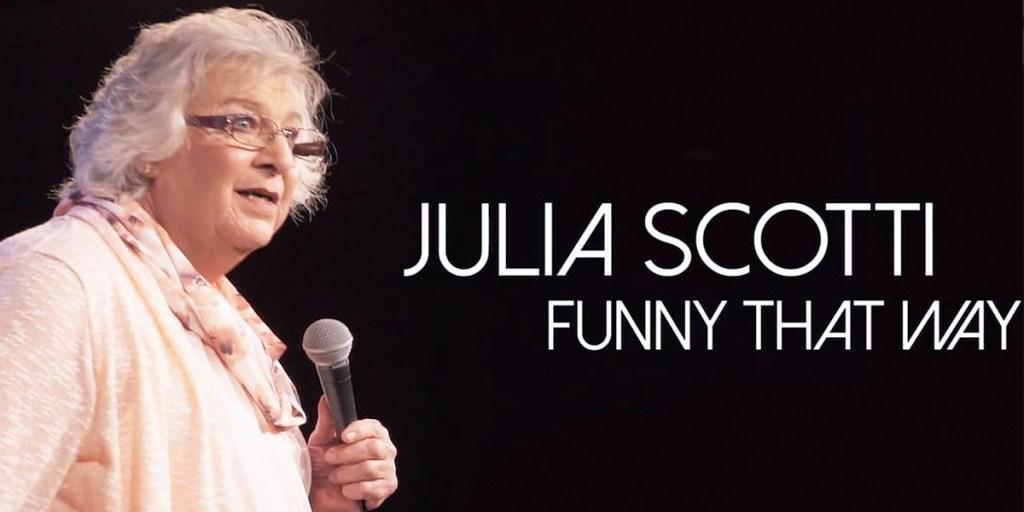 Covering entertainment, I often receive press releases and many requests to share news of upcoming projects. As much as I try, it’s difficult to watch all the previews and screenings we are offered, but sometimes a project’s description is intriguing enough to jump out the pile and straight to the head of my “Must-see” list.

The new documentary JULIA SCOTTI: FUNNY THAT WAY, is one of those pile jumpers and it does not disappoint. Directed by female, first-time docu-filmmaker Susan Sandler (writer of Golden Globe-nominated Crossing Delancey), viewers are taken on an emotional roller coaster as the uplifting journey of comedian Julia Scotti plays out on-screen.

With warmth, humor, and silver-haired wisdom, Julia is one of the funniest comedians performing today. Decades ago, however, Julia Scotti performed as Rick Scotti, appearing on bills with Jerry Seinfeld and Chris Rock. After an unexpected road to self-discovery, today the senior, trans comedian has returned to the stage as “the crazy old lady of comedy,” and finalist on America’s Got Talent.

JULIA SCOTTI: FUNNY THAT WAY is a tender, funny, and triumphant comeback tale. It invites us to voyeuristically revisit the past with Julia through her vintage home movies, photos, and interviews with her adult children who she reconnected with after nearly 15 years of estrangement.

Julia’s third ex-wife, Kate, also appears in the film but by audio-only. In one of the most touching moments, she expresses her love and eternal adoration for Julia. Kate shares her choice to stay with Rick throughout the transition and made an effort to stay married afterward. The relationship became strained once Rick had fully become Julia and began her new life as a trans woman. The couple ultimately divorced but share a lasting personal connection.

To establish Julia’s back story, the film’s primary starting point is the comedy boom of the late 1980s. At that time, Rick Scotti was a stand-up comedian on the rise, working clubs across the country and winning a contest that got him booked on the Regis Philbin Show – a pretty big deal for an unknown comedian.

Simultaneously Rick realized his long-suffered inner turbulence regarding gender, sexuality, and gender identity became too hard to ignore. At that time, the words gender dysphoria and gender reassignment surgery were not as common as they are today. At age forty-seven, Rick made the life-embracing decision to begin hormonal treatments, have reassignment surgery, and live with her new identity as Julia Scotti.

That decision, while brave, came with a cost of isolation. Everyone turned away—former wives, friends, family, comedy, and her children. Still, Julia faced her unique circumstances head-on, never giving up on a world that seemed to so abruptly give up on her.

I am no way of being hyperbolic when I say this was one of the best documentaries I’ve seen in a long time. At just about one hour and a half long, it brought me through a range of emotions. I cried five times (I counted), but more importantly, I laughed a lot too, and I cheered for Julia’s well-deserved return to where she belongs – doing kick-ass comedy shows across the country and living in her truth.

The film tracks Julia’s incredible comeback, the rough life on the comedy circuit, and the return of her children, as comedy becomes a shared language of identity, healing, and joy.

I would be remiss not give accolades to Susan Sandler, whose direction and streamlined narrative allows the documentary to feel honest without self-aggrandizement or self-pity. It is a real and relatable human interest piece, and its festival acclaim marks the directorial debut triumph for 72-year-old Sandler, as well.

In Sandler’s own words about Julia and the documentary she shares the following:

“As we began to exchange histories, an undeniable link emerged—a sisterhood. We are women of a certain age with an Italian/Jewish earthiness, a shared sensibility for human comedy, and a willingness to always say yes to truth, no matter where it takes you.

Having dedicated the past five years to research, shooting, archival deep dives, and shaping the story of Julia’s journey, it has been a consistently rich, moving, and joyful experience to be a part of her life.”

I don’t usually recommend things in my articles, but in this instance, I highly recommend you watch JULIA SCOTTI: FUNNY THAT WAY. It will sadden you, move you, bring you joy and restore your faith in humans.

Watch the trailer below and visit the film’s website for more information:

This article was first published in Instinct Magazine.

Corey Andrew
Corey Andrew is a Columnist at Grit Daily and Instinct Magazine – a leading LGBTQ media source. Andrew’s career as a media personality started on the stages of New York City’s most famous comedy clubs; among them, Catch a Rising Star and Caroline’s on Broadway. He also has over 15 years of experience as a copywriter in advertising and has conducted countless celebrity interviews with some of the biggest names in show business.
More from EntertainmentMore posts in Entertainment »
More from FilmMore posts in Film »