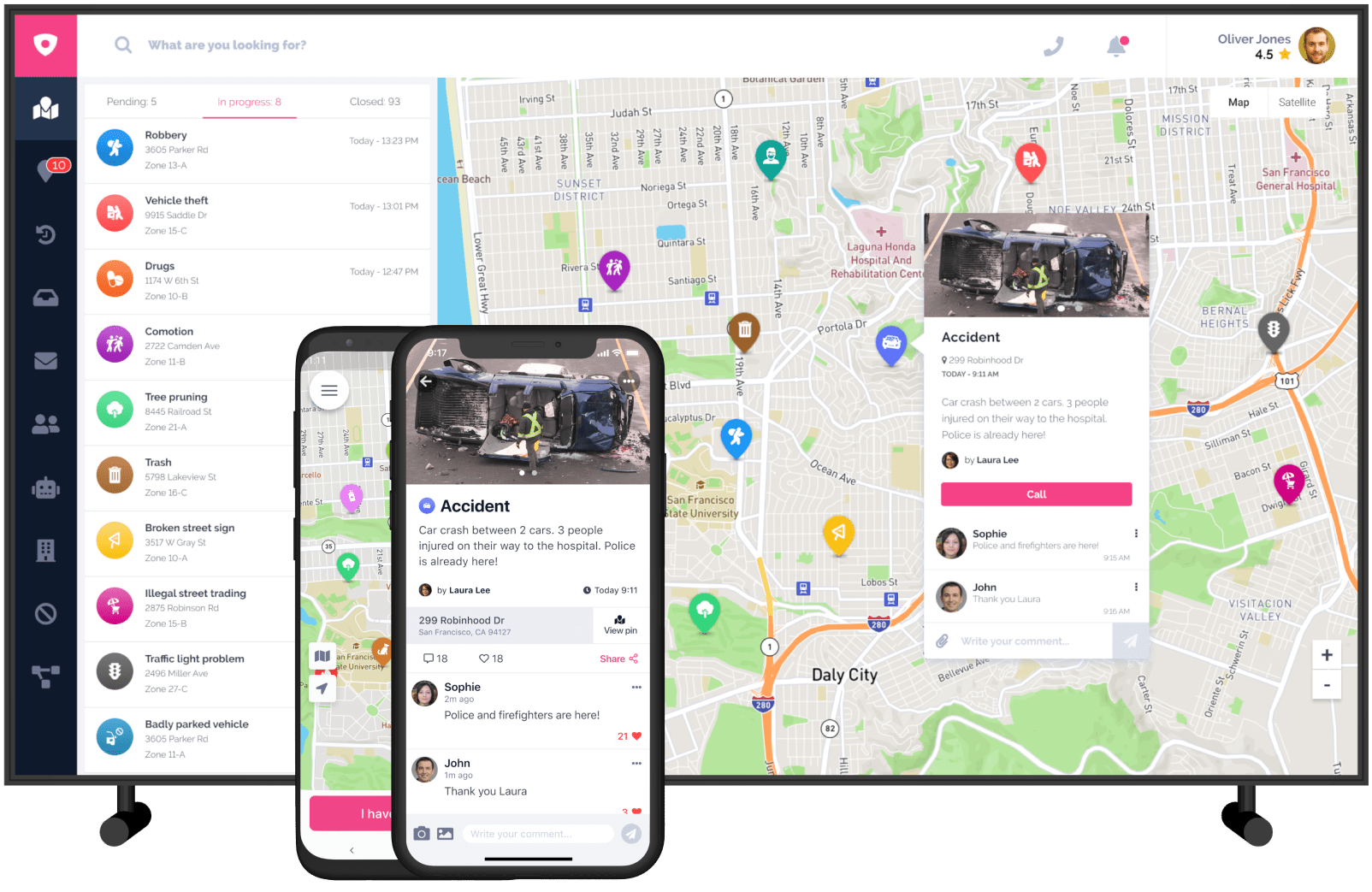 While social media has allowed people around the world to keep in touch more easily, most of us are not necessarily better informed about what’s going on in our own neighborhoods. SOSAFE is an app that uses a person’s location to connect them with users and local officials to report emergencies. People can report fires, suspicious activity, robberies, lost pets, etc. and can even contact local first responders, through the app, to get help.

Grit Daily caught up with SOSAFE co-founder Cristian Cabrera out of Santiago, Chile, and he explained that the idea for the app came after his sister was the victim of a robbery. She was unable to procure help from the local authorities because it took them 20 minutes to answer the phone. Cabrera, an engineer, and co-founder Carlos Fernández did some research to see what types of apps were available to help people with security situations, especially those who might not be able to call for help using the telephone. They found panic button apps, but saw that the technology didn’t address the problem as they saw it. He says that in 21st century, we shouldn’t still be using ‘80s technology, i.e. phones, to report crimes. The initial focus of the app was security, but then they found that people were using it for a variety of things, including finding lost pets.

The app is free for users, and can be used to report a variety of incidences to neighbors. City officials may also opt to set up a subscription with the app developers to connect services to first responders in their city. Cabrera mentioned that it shouldn’t be up to the consumer to know whom to contact; “you report, and leave the rest to SOSAFE.” He also explained that the GPS aspect is very helpful, as a person does not always know their exact location, especially if they are traveling (the app automatically updates location so you’re able to report and see crimes where you are.)

The timing for an app like SOSAFE is opportune, as protests around the nation are calling for police reform. A commonly discussed issue is that of having trained, unarmed mental health professionals respond to mental health emergencies, rather than police. The app would be a perfect way for cities to take bold action on reform, by allowing their citizens to categorize emergencies so that law enforcement officials aren’t relied upon for every incident. Cabrera says, “We’re not here to replace anything; that’s not how we see it. We’re just here to offer another tool we think is actually better.”

Some of the reporting categories on the app include: security, ambulance, fire, robbery, vehicle theft, commotion, drugs, lost pet, etc. Users may also post anonymously and can include pictures in their reports. In order to keep abuse to a minimum, i.e. users posting fake reports or sexually explicit content, users can report other users for misreporting, and the software includes A.I. that scans pictures for explicit content, and reports for bad words.

SOSAFE made waves in Chile, and was even used to catch a drug lord whom local authorities had been trying to nab for years. They have expanded into various other Latin American countries, and recently launched in the United States. The team went to a conference in Miami, where they gained traction. Americans who first saw it described it as the best of what the Waze and Nextdoor apps had to offer, with the added value of a security component that linked directly to first responders.

An app like SOSAFE caters to younger generations’ way of doing things. Phones are rarely used to make phone calls. Many young people feel more comfortable posting content than verbally talking about an incident. The anonymity may allow users to feel more comfortable posting about illicit activity that could cause retaliation, like drug crimes, and incidents may be shared on social media websites via the app.

City officials could promote the use of such an app to get better visibility of what’s really going on in their local communities. SOSAFE offers city officials statistics about what types of reports are being made more frequently in certain areas. It also allows residents to feel more of a connection to their neighbors, by updating them on what is happening.

The SOSAFE app may be the future of emergency reporting. Cabrera says, “We’re inviting the community to report on what’s going on out there. The more you use it the better it gets and the more useful it becomes to you.”