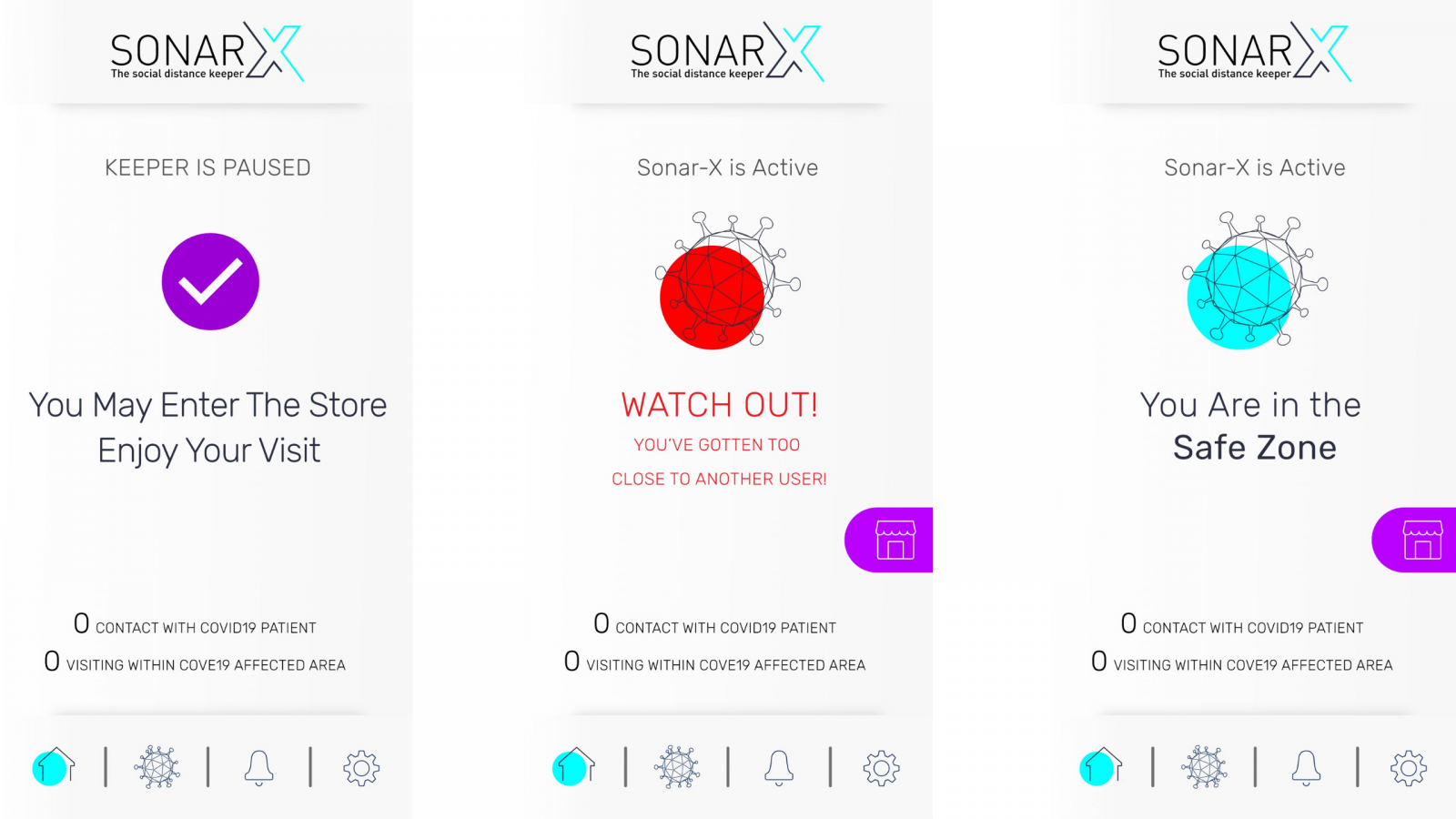 Sonar-X is a privacy-focused Covid-19 contact tracing that uses ultrasonic, not Bluetooth

Contact tracing has been in the news a lot lately, especially when connected to Google and Apple.

Lauded by some, and scorned by others, the topic of contact tracing – after a positive or negative test for COVID-19 – has created deep discussions everywhere, including commentary on accuracy, privacy, security, and adoption.

Most contact tracing solutions rely on Bluetooth technology to determine if you have come into contact with or been near someone that has tested positive for the novel coronavirus.

Sonarax Technologies – a deep-tech ultrasonic connectivity company – recently announced the launch of its Sonar-X app that uses ultrasonic technology to help users steer clear of those people that have tested positive.

So why is it important that SONAR-X uses ultrasonic technology, instead of Bluetooth?

Firstly, the technology in use within Sonar-X offers higher accuracy than Bluetooth-based solutions.

Bluetooth range starts from five meters, with a two-meter “error range,” meaning it poses a higher risk for false positives and false negatives. In addition, Sonarax claims that Google’s and Apple’s apps have trouble detecting other devices in motion, meaning it will alert you if you are on a bus with an infected user, but not necessarily if you walk by them on the street. By using ultrasonic technology, Sonar-X solves both of those problems.

In addition, Google’s and Apple’s COVID-19 contact tracing drew criticism recently as skeptics feared for user data privacy and questioned the initiative’s accuracy. And let’s face it, neither Google nor Apple have a spotless record when it comes to the use of personal data.

All data recorded by Sonar-X remains on the user’s smartphone, since all communications take place device-to-device without transmitting information through a server. Even then, “Unique ID,” “Time Span,” and “Distance Maintenance” items are the only data points recorded within the smartphone. This server-less architecture ensures privacy compliance and added security, and is therefore safe from web hackers.

The Sonar-X app comes in two flavors. One for citizens, and one for businesses.

“The consumer and business apps have different functions,” Chief Commercial Officer at Sonarax, Nimrod May, told me. “The consumer application provides real-time social distancing alerts, to ensure that users are maintaining a safe distance from one another. The business application was developed to provide location-based alerts in the event of a positive COVID-19 diagnosis.”

Sonar-X for Consumers detects your precise location and verifies physical presence accurately, starting from one foot (30 centimeters), without the need for an internet or cellular connection.

It then alerts you whenever another phone is detected within the six-foot (two-meter) recommended social distance barrier.

Sonar-X for Business helps business owners get back to work responsibly by alerting them – using anonymous tracking – of any customer who overlapped or interacted with any users that received a confirmed diagnosis of the virus.

“Following the launch of these two separate applications, we immediately began to receive requests for an enterprise version to support businesses and companies to protect their employees as they resume their businesses,” May said.

“In order to facilitate this shift, we have adapted, improved, and combined both applications into a single enterprise solution. We have also begun to add a robust back-end system, where select admins will be given access to both company-wide along with user-specific analytics. We’re also implementing Machine Learning functionalities to pro-actively alert admins of high-risk areas where individuals are not maintaining social distancing or where there is a potential for widespread infection,” May continued.

That being said, in order for Sonar-X to work effectively, it is going to need support from not just its users, but local and national authorities across the globe.

“Sonar-X could be implemented in its current form in any geographic location,” May said. “With the understanding that Sonar-X is totally private, governmental authorities might want to adapt it for a white-label implementation in their country. While Sonar-X itself will always remain anonymous and secure, in such a case, we have the ability to customize third-party applications to meet any specification.”

Sonar-X for Consumers and Sonar-X for Business are available today for Android and iOS.