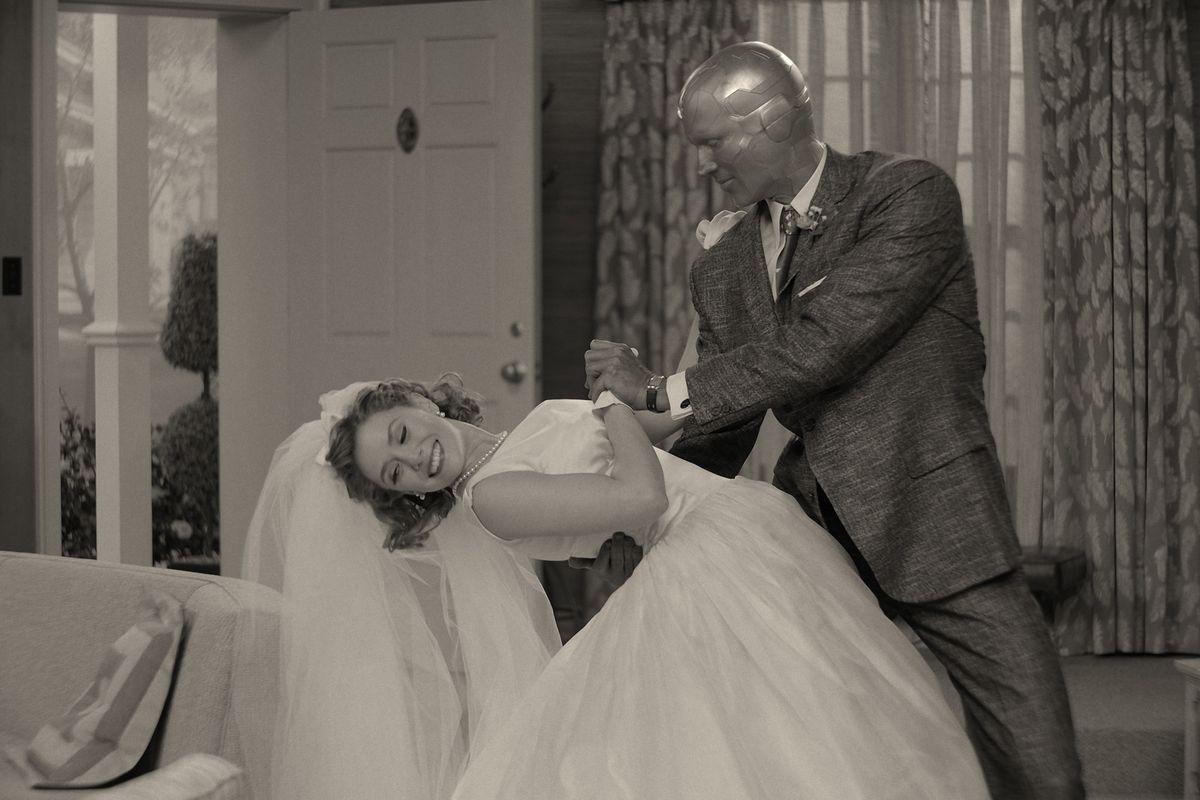 Some Of the Wandavision Easter Eggs You May Have Missed

Wanda (Elizabeth Olsen) and Vision (Paul Bettany) are just your typical happily married couple. They live a perfectly normal suburban life and do perfectly normal things. Except when a voice takes over the radio asking, “Who’s doing this to you Wanda?” Welcome to Wandavision, a perfectly normal show where things are not quite as they seem.

Wandavision is a welcome return to the Marvel Cinematic Universe. Fans haven’t had any new MCU content since 2019. Wanda of course, is Wanda Maximoff, also known as Scarlet Witch. Fans last saw her angrily facing off against Thanos in Avengers: Endgame. “You took everything from me.” Wanda tells Thanos. One of the loved ones Thanos took from her was Vision himself in Avengers: Infinity War.

So how is Vision alive in Wandavision? While the first two episodes didn’t answer that question, they were chock full of MCU Easter eggs and several for sitcom classics. Here were some of GritDaily’s favorites.

The Homage to Classic Sitcoms

Each episode of Wandavision is a clever homage to classic sitcoms. We start off in the 50’s, with episode one paying homage to I Love Lucy and the Dick Van Dyke show. Marvel Studios President Kevin Feige and Wandavision director Matt Shakman even consulted with Dick Van Dyke himself, to make sure the sitcom feel was accurate. The production team even dressed up in 50’s clothing to shoot the first episode, which was filmed in front of a live studio audience.

The second episode of WandaVision jumps to the 60’s, paying tribute to Bewitched, a television show about a witch just trying to live a normal life with her husband. (Sound familiar?) There was even a scene where Wanda and Vision are in separate beds, but Wanda snaps her fingers and joins the two beds together. (Television censors back in that era did not allow a couple to be shown in the same bed.)

Now for the MCU Easter eggs

In the first episode Wanda cracks a cheesy joke about, “My husband and his indestructible head.” Vision was killed in Avengers: Infinity War after Thanos rewound time to take the Mind Stone from his head, thus completing Thanos’s collection of Infinity Stones. This led to Thanos gaining the ability to snap half of life out of existence.

There’s something about the date August 23rd. Wanda and Vision can’t seem to remember why the day is so significant. Is it their anniversary? Or really just their scheduled dinner with the Harts? Or could it be a reference to Avengers volume one, comic 238, where Vision is reactivated?

The second commercial is for a Strucker watch. Strucker is not a familiar of a name as Stark, so let’s rewind back to Avengers: Age of Ultron. Baron Wolfgang von Strucker was one of the leaders of HYDRA who used Wanda and her brother Pietro as test subjects for his experiments. The watch face even has a small HYDRA symbol on it.

In the second episode of WandaVision the audience and Wanda are introduced to Geraldine (Teyonah Parris.) Geraldine seems to be the only genuinely friendly face in a sea of neighborhood wives meeting to discuss the upcoming magic show. Is this the beginning of a beautiful friendship for Wanda and Geraldine, if that’s even Geraldine’s real name?

There has been speculation that Monica is working undercover for S.W.O.R.D, or the Sentient World Observation Response Department. S.W.O.R.D is basically the space version of the Marvel American counter-terrorism agency S.H.I.E.L.D. (So S.W.O.R.D focuses on extraterrestrial threats while S.H.I.E.L.D deals with Earth-based threats.) Is Monica working on the inside for S.W.O.R.D while this unknown agent watches from the outside?

What’s going on in WandaVision? The first two episodes set up what is shaping up to be an intriguing Marvel mystery. Is Wanda doing this to herself? (She can manipulate reality after all.) Is an unknown villain keeping her trapped in an alternate reality? Stay tuned for next week, when episode three of WandaVision drops on Disney Plus, hopefully with even more Easter eggs for us to crack open.