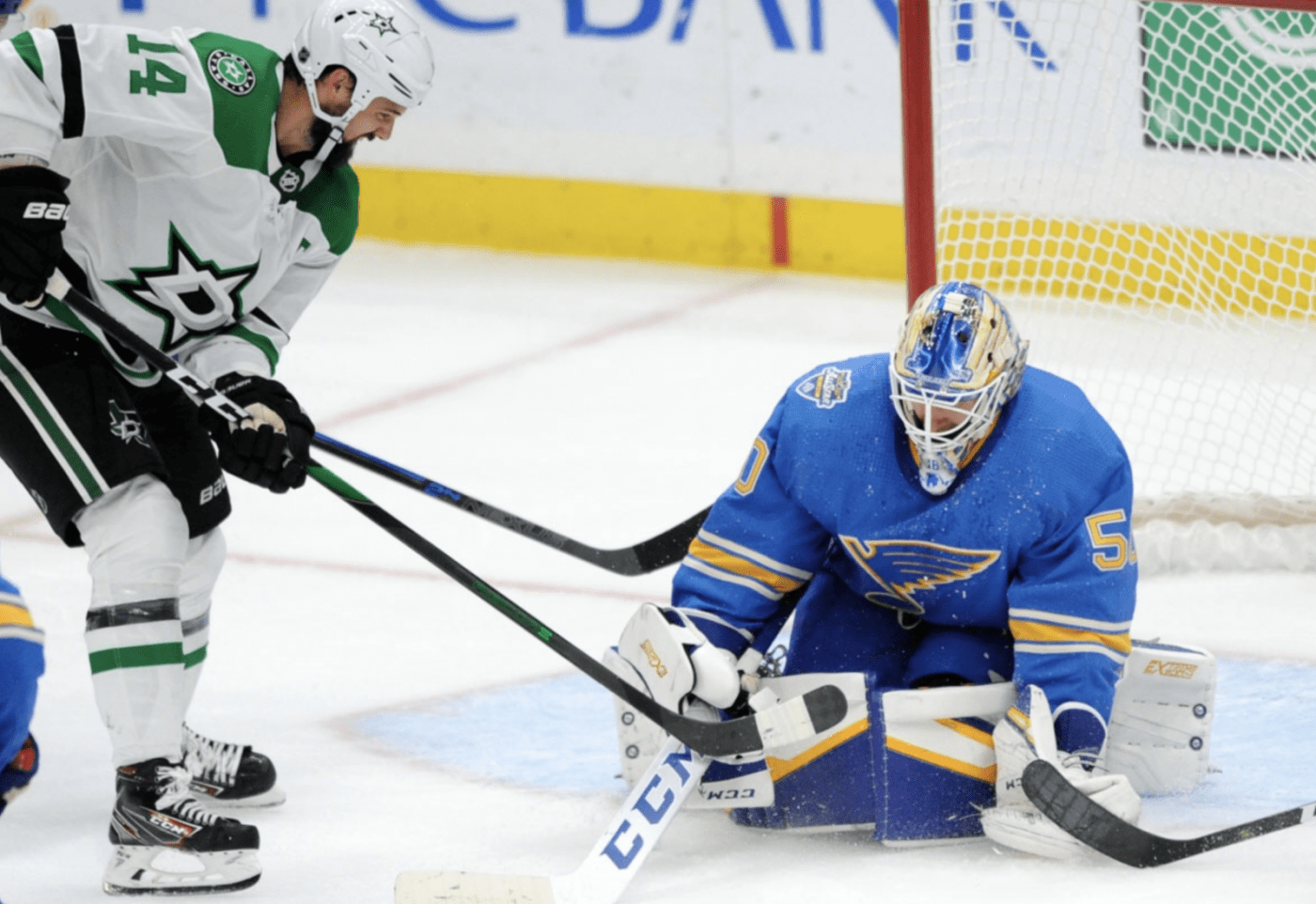 Slow Starts Haunt the Stars Again As They Lose to St. Louis 3-2

The season may be very young, but we’re already getting ideas about where teams both currently stand and need improvement.

The Dallas Stars are coming off of a disappointing loss to the Bruins last Thursday. Last night, they took on the defending Stanley Cup Champion St. Louis Blues.

Deja Vu For Dallas—1 Shot Against, 1 Goal Against

The play began with a 4 on 2 rush towards the Stars’ net through the neutral zone.

Sammy Blais would take it into the zone, and then immediately looked to his his right to find David Perron breaking free. Blais would feed it to Perron, who then took a quick shot that went over the glove of Ben Bishop and into the net.

This is back to back games now where the Stars surrendered a goal on the first shot of the game.

A Fluke Goal is Still a Goal—Stars Respond Shorthanded

Stars needed a bit of luck to help get them going, and as luck would have it, they got that help.

A broken play on a St. Louis powerplay occurred, and Mattias Janmark jumped on that opportunity. With a lot of room in front of him, but a Blues defenseman closing in, Janmark enters the zone and lets go a quick shot at the net. The puck beats Jordan Bennington, but doesn’t initially enter the net. Bennington would reach for it, but before he got there, a sprinting Jaden Schwartz, attempting to swipe it away, knocks it into his own net.

The score would remain tied 1-1 at the end of the first period.

Young Superstar Gives Dallas Their First Lead of the Season

Miro Heiskanen is coming off of a rookie season to remember. Last night, he picked up right where he left off to begin his sophomore campaign.

A broken play in the Dallas defensive end led to a 2 on 1 rush with Denis Gurianov and Heiskanen taking on Vince Dunn of the Blues. A great pass was made from Gurianov to Heiskanen, but Bennington robbed him there. The Stars would stay with it though. The puck was all over the place and no one could take control of it. Finally, it’s Heiskanen who does control it and scores from a razor thin angle to put Dallas on top 2-1.

Bad Bounce Off Bishop Leads to a Tied Game

It was the Blues’ turn to get a little puck luck.

The Blues would break out of their defensive end, and Vladimir Tarasenko would take the puck into the Stars’ end. He’d get caught up by the Stars’ defender, but he was able to shimmy the puck to Brayden Schenn. Schenn would shoot the puck, it went off of Bishop’s chest, and it hopped up in the air and behind him into the net.

This goal ties this game at 2 with lots of hockey still on the clock.

A very simple play would turn out to be the biggest play of the night for St. Louis.

A faceoff win by Ryan O’Reilly went back to the point for Carl Gunnarsson to let a shot loose. The puck would hit the stick of Sammy Blais and completely change direction, eluding Bishop, and goes into the net.

This would be the final goal of the game, giving the Blues the win over the Stars 3-2.

The Stars are taking on the Detroit Red Wings Sunday night at 6:00pm CT.