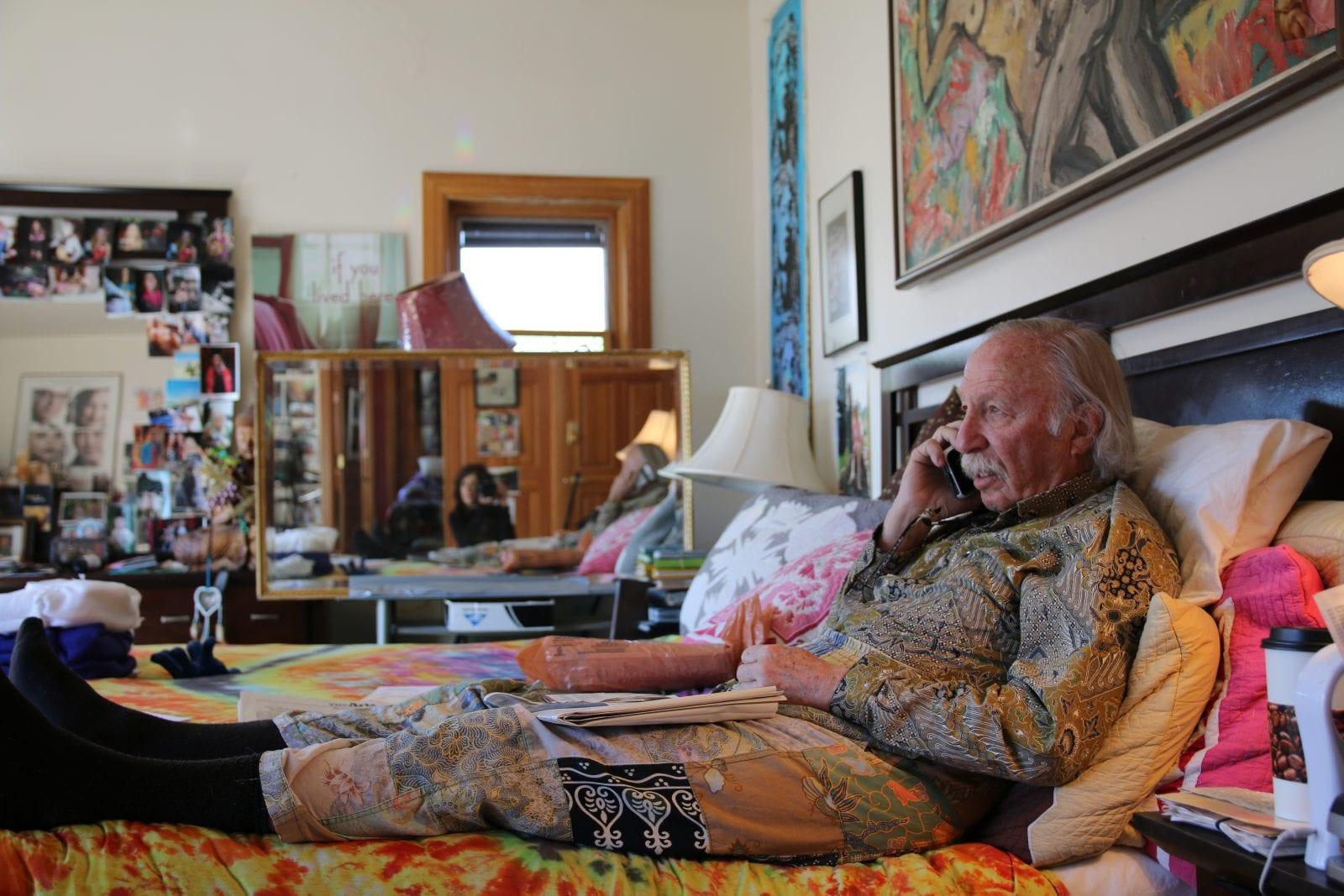 MoMA Screens Slamdance Opener “A Film About A Father Who”

This year’s compelling Slamdance opener, “A Film About A Father Who” is now headed to screen at Documentary Fortnight: The Museum of Modern Art’s Festival of Non-Fiction Film, with its director Lynne Sachs “on-site” for the evening.

The Slamdance documentary is by director Lynne Sachs, who spent 35 years between 1984 and 2019, shooting 8 and 16mm film, videotape, and digital images of her father, Ira Sachs Sr.

For her audience, Sachs brings viewers into a mindset of what connects a child to her parent and what it means to really go beneath the surface of those closest to us. And for Sachs as a daughter…learning more about her father than she had ever hoped will take her down a road she never imagined.

Grit Daily spoke with Sachs ahead of the upcoming February event in New York at the Museum of Modern Art and about her Slamdance world premiere.

GD: For the pedestrians among us, what is an “experimental documentary” filmmaker?

LS: I’ve been hoping to articulate what I mean by “experimental documentary” for a long time, so now you are giving me the chance. I started describing my work this way 25 years ago, and the expression is finally catching up to the field today.

When I say “experimental,” I mean that I don’t follow any template, model or paradigm for a what a documentary should be. Like a scientist, I go into the making of any new film with the intention of finding out something new, giving support to a hypothesis I need to prove. I am as committed to the process as I am to the product itself.

The “experimental” side of me is also aligned to my seeing my work as a part of an entire artistic practice in which the materials are also of utmost importance. I am deeply aware of my craft and my tools. I feel a closeness to my camera in the same way that a painter effuses over her brushes.

Whether I am working with film from my own camera or archival footage, I allow the images to guide me in ways that many documentarians, who feel they are working in the service of a character-driven narrative, do not.

I also shape, sculpt and manipulate the visual and aural parts of the film in both playful and radical ways, transforming the audiences experience of the story. I take liberties with the concept of reality, moving away from a journalistic recounting.

I am not trying to educate my audience, but rather guide them toward a new approach to thinking about themselves, their families and the world.  My films rarely offer answers. They are essay films that, in the true sense of that word, spark reflection and doubt — about history, about politics, about sexuality and about ourselves.

GD: And what is “traditional chronological narrative”?

LS:  A “traditional chronological narrative” moves through time in the same order that things happened in the past or in the fictional story, with little to no explicit intervention on the part of the filmmaker. My interest in investigating a moment in history, a life, the inter-relations of a family, a social situation or anything else is much more associative, lyrical, metaphoric, even rhetorical.

I want the shift from one scene to the next or one shot to the next to follow an internal logic that I have created through the editing of the film, rather than solely as a result of cause and effect. In this way, time moves away from having a predictable logic that follows the guidelines of a “traditional narrative” where you know that all the parameters of the film will be delivered by minute 15 and that the arc will arrive 4/5 of the way through the time of the movie. A feature film does not have to imitate a novel in this way.

In my mind, a film should be like a good mystery or a poem, in that at the moment it’s over, you mostly grasp the way that eat each of the details worked to create the cinematic gestalt.

But, you also want to experience it again, knowing that on second viewing and listening, you will see even more, hear what you hardly noticed the first time. As a participant in the film, you become a collaborator, making connections that only exist between the shots, meaning in the synapses of your very engaged movie-watching imagination.

With A Film About a Father Who, I worked with my editor Rebecca Shapass for a year to create twelve distinct experimental films, each about 6 minutes long. Then we took another year to find the transitions between these episodic pieces, pulling them apart, fragmenting them and then putting the whole thing together with the support of two sound artist collaborators, composer Stephen Vitiello and sound mixer Kevin T. Allen, whose contributions are integral to the whole vision and sound of the film.

GD: From Slamdance and beyond, recall 30 years-old and how you “decide” what to pursue next for your career?

LS: By age 30, I had finished graduate school, was living in San Francisco, teaching and screening my films in festivals, small theaters and artist spaces. As decade markers tend to do for most of us, this jump into my 30s turned into a moment of reflection. I had recently become fascinated with the notion that a movie could be a place for deep self-reflection.

When I discovered the essay films of directors such a Chris Marker, Chantal Akerman, Su Friedrich, Agnès Varda, and Ross McElwee, all filmmakers who saw the medium as a vessel for expressing their point-of-view, I decided to throw myself into.

I started shooting with my dad, having no idea where our “collaboration” as a father and a daughter would take us, and certainly not knowing that it would take me three decades. It’s been a labor-of love in the most profound way. Making a project like this, whether it be a film, a memoir or any other endeavor of this scope, also gives you the self-issued “license” to talk to go deep with the people in your life.

GD: What (special treat) is in store for viewers who can get exclusive access to the New York MOMA’s screening of “Film About a Father Who?”

LS: Having a New York City premiere at the Museum of Modern Art is like nothing else in the world for an artist. This is actually the 9th time that I have premiered a film in one of their theaters, and I always get such a surge of excitement when my images appear on the screen, just so close to the canvases of so many great works of art.

It is a particularly special time now because the museum has just completed a major enlargement and re-thinking on modern art, where they are no longer primarily saluting the great white male artists of our times, but instead creating incredibly interesting and surprising juxtapositions, like seeing a painting by Faith Ringgold next to Pablo Picasso, a pairing that has elicited an enormous amount of discussion in the culture world. Times are changing.

If your readers are in New York City on either Feb. 11 or 14, they will be able to see my newest feature, “Film About a Father Who.” Over a period of 35 years between 1984 and 2019, I shot 8 and 16mm film, videotape and digital images of dad, Ira Sachs Sr., a bon vivant and a bohemian businessman from Park City, Utah.

While making the film, I kept going back to the multi-dimensional, Cubist renderings of a face, so thinking about Picasso in the same building resonates for me so much. My portrait of my father includes simultaneous, sometimes contradictory, views of one seemingly unknowable man who is publicly the uninhibited center of the frame yet privately ensconced in secrets. I knew this from the start, that’s why I thought it would be a compelling movie!

While I discover more about my father than I had ever hoped to reveal, I still maintain my love for my dad.  Already since the premiere of the film at Slamdance last week, I have had the chance to talk with so many people about their families. My movie seems to bring this out, and that is what will make the coming months all the more interesting.