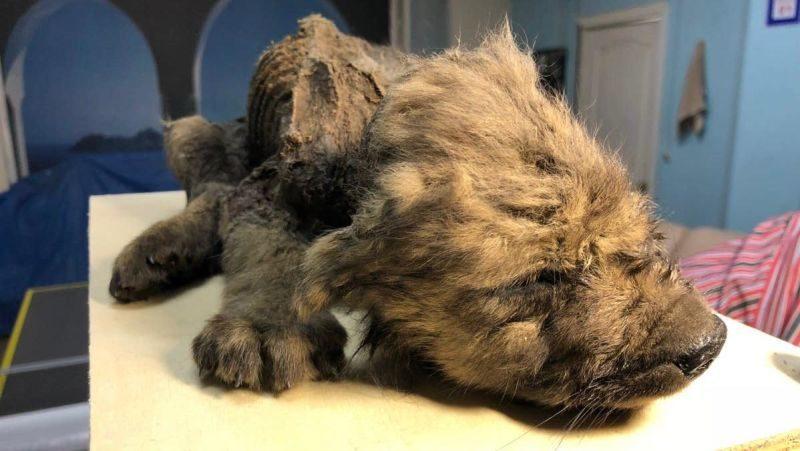 By Yelena Mandenberg on December 3, 2019

Siberia’s permafrost has unleashed many interesting finds, and this week the internet is obsessed with an 18,000-year-old puppy, found perfectly preserved, with fur, teeth, and even whiskers intact.

Scientists found the dog in the Yakutsk region of Siberia. Through carbon dating, the Centre for Palaeogenetics—a joint project between Stockholm University and the Swedish Museum of Natural History found that the specimen is male and was two months old when it died… and that it has been hidden in the ice for a remarkable 18,000 years.

“This puppy has all its limbs, pelage — fur, even whiskers. The nose is visible. There are teeth. We can determine due to some data that it is a male,” said Nikolai Androsov, director of the Northern World museum, at a presentation of the discovery in Yakutsk.

Researchers named the puppy “Dogor,” which means “friend” in Yakutian.

Dog species change and evolve quickly due to human breeding. The 18,000-Year-old puppy has DNA that doesn’t quite fit with either domesticated dogs or wolves.

“It’s normally relatively easy to tell the difference between the two. We have a lot of data from it already, and with that amount of data, you’d expect to tell if it was one or the other,” David Stanton, a researcher at the Centre for Palaeogenetics, told CNN. “The fact that we can’t might suggest that it’s from a population that was ancestral to both—to dogs and wolves.”

The internet is already in love with this oldest good boy:

Modern dogs were domesticated from wolves but the debate rages on as to when. Research also shows that there may have two domestication events, one in Europe and one in Asia.

“As you go back in time, as you get closer to the point that dogs and wolves converge,” Stanton said, it becomes “harder to tell between the two.”

The team of scientists has their work cut out for them. With such a well-preserved specimen, it’s likely they’ll be able to extract a wealth of information about life 18,000 years ago.