SBF, FTX Failures at the Center of Effective Altruism Hypocrisy among Billionaires

We recently wrote about Elon’s takeover of Twitter and since then he’s released more of the Twitter files, banned journalists from the site, get “hardcore” and let a public poll determine if he should remove himself as CEO. He’s had a busy week and dominated headlines, but he’s not the only billionaire in the news for all the wrong reasons- he shares that honor with Sam Bankman-Fried.

In 2017, Sam Bankman-Fried (SBF), a recent MIT graduate, founded Alameda Research. By 2022, his crypto firm, Futures Exchange (FTX) was valued at $32B. In October of 2022, Mr. Bankman-Fried himself was worth $10.5B, via Forbes. Last Monday, Mr. Bankman-Fried was arrested in the Bahamas and charged by the Securities and Exchange Commission (SEC) with one of the largest financial frauds in history. So what happened?

After starting his career at the trading firm Jane Street, Mr. Bankman-Fried moved to Berkeley and founded Alameda Research, a proprietary trading firm specializing in the trading of cryptocurrencies. At the time (fall of 2017), the crypto market was emerging and unregulated. The company made much of its early money through arbitrage trading between prices in the US and Japan (essentially, there was a small difference in prices between US and Japanese markets, and Alameda exploited this).

About a year later, Mr. Bankman-Fried shifted his attention away from Alameda and launched FTX. His on-again-off-again girlfriend, Caroline Ellison became the CEO of Alameda. While they claimed the two firms would be “at an arm’s length” it’s hard to imagine they were. This would prove problematic later.

Meanwhile, FTX acted as a cryptocurrency exchange where users could trade coins for one another. The firm quickly became one of the largest exchanges in the world. One reason for this was that FTX allowed traders to use margin more generously than other platforms. Margin trading is when traders (customers) borrow more money to trade from the brokers (exchanges). Regardless of if the trade makes a profit, the loan needs to be repaid which makes margin trading risky. However, it generates more fees for exchanges such as FTX, since they make a small amount of money off each trade on their platform.

To say FTX’s rise was meteoric would be an understatement. In just three years, the company was valued more than Deutsche Bank, had their name plastered on the home of the Miami Heat’s stadium, and had dozens of celebrity endorsements including Shaq. You might remember their Super Bowl ad as well. Mr. Bankman-Fried was worth over ten billion dollars just three years after starting the company and began buying penthouses in the Bahamas. If it sounds too good to be true it’s because it was.

In November, CoinDesk, a leading crypto publication, released an article citing oddities in Alameda’s balance sheet. They discovered that Alameda’s balance sheet was loaded with FTT, a native cryptocurrency used by FTX. When users of FTX trade in FTT, they are offered discounts. This alone gave FTT value. A coin (or token) such as FTT is an alternative to major cryptocurrencies such as Bitcoin or Ethereum. FTX sold FTT to the public and made hundreds of millions off the sale. With that being said the discovery of FTT on Alameda’s balance sheet was alarming because it raised the question: Were Alameda and FTX separate entities? If not, what was their relationship?

By that time (fall of 2022), Alameda’s business model had shifted away from arbitrage and had moved towards riskier trading. The CoinDesk article turned eyes towards Alameda and its relationship to FTX. Investors and customers panicked and started pulling their money out of FTX despite Mr. Bankman-Feld tweeting that everything was fine. The panic caused a liquidity crisis (similar to a bank run if that’s a more familiar term). The Financial Times then reported that FTX had over $9B in liabilities and just $1B in assets. In other words, they were extremely leveraged. Because of their leverage, FTX was not able to process all of the customer withdrawals. A week later, FTX filed for bankruptcy.

Much of the liabilities on the balance sheet were customer deposits. So where did the money go? That’s where things get tricky because authorities are still trying to figure it out. According to charges filed by federal regulators, FTX was taking customer deposits and sending it to Alameda Research which then used the money to fund risky crypto bets. Those bets didn’t pay off because the crypto market is extremely volatile and has lost more than half its value over the past year. The money went down the drain.

Since November, Mr. Bankman-Feld has gone on a media tour and offered plenty of explanations of what happened. The kind man he is, he said he would let us know what happened as soon as he figured it out. In a recent interview with the Wall Street Journal, he didn’t believe he’d end up going to jail. On December 12th, he was arrested in the Bahamas and charged with various counts centered around fraud. He’d been using FTX as a personal piggy bank to fund his lavish lifestyle and personal projects.

Through his interviews Mr. Bankman-Feld said that he wasn’t aware of what was going on. It’s a pathetic excuse and frankly I don’t think there’s a single person that buys it. He attended prestigious summer camps as a kid, is the son of Stanford professors, and an MIT physics graduate. He is not the fool he claims to be.

Like many fraudsters before him, Mr. Bankman-Fried plays the victim. It’s impossible not to follow this story without making comparisons to Bernie Madoff, the mastermind behind the largest Ponzi scheme in history. Madoff, who died in prison recently, blamed plenty of others for his actions including his friends. Mr. Bankman-Fried blamed management failures and accounting mistakes which is funny because FTX was using QuickBooks, an accounting software designed for small businesses. Like Mr. Madoff, Mr. Bankman-Fried was fine taking the praise so long as FTX was on top of the world. He portrayed himself as a good person, and, while in the spotlight, Mr. Bankman-Fried was a proponent of effective altruism. I’d never heard about the movement before my research of SBF and the more I read, the more I hated it.

Effective altruism (EA) is the idea that we should ‘earn to give’ meaning that our motivations for earning money should not be to simply become rich or provide for ourselves and our family, but to make the world a better place. It is a philosophical and social movement first brought forth by Australian philosopher Peter Singer in the early 2000s.

Mr. Bankman-Fried was a proponent of this social movement and for a brief time worked at the Centre for Effective Altruism. Once the CEO of FTX, he founded the FTX Future Fund, a fund dedicated to effective giving. The board of this fund included William MacAskill, an Oxford Philosopher and leader in the effective altruism movement. While it seems nice in theory, the movement is extremely problematic for several reasons.

The first is the notion that the ends justify the means. The FTX Futures Fund put hundreds of millions of dollars into social movements that do good (however they defined it). How can this money be doing good if it was literally stolen from customers of FTX? It’s kind of like Andrew Carnegie repainting himself as a philanthropist despite being extremely harsh on labor movements at his factories. Is there really a net gain here (I guess the ethicists will have to answer that)?

The second issue I take with effective altruism is privilege. While Mr. Bankman-Fried said we should ‘earn to give’, he spent $350M on real estate including a $16M vacation home for his parents at the same time 11% of Americans were living below the poverty line. Effective altruism is not genuine, something Mr. Bankman-Feld seemingly admitted in this interview. I don’t think you can possibly say your motivation to earn a ton of money is for others unless you’re already coming from a place of wealth. People simply do not make money for other people, it’s not how the world works. People make money to feed their families and keep shelters over their heads.

The last issue I have with effective altruism is that it presupposes a world of inequality. It’s true that our country and many others in the world struggle with increasing inequality but I don’t think we should just assume the world will always be this way. As a species, we will always face problems and it seems odd to me that a group of philosophers would claim that the way to fix social issues is to have a tiny group of people earn a ton of money just to give it away. This is lazy thinking and we have recent evidence to back this up.

During the pandemic, billionaires did not help. Instead, they added more to their net worth than they had the previous 14 years. It wasn’t billionaires that stepped up, it was our government. So, instead of philosophizing where billionaires should spend their money, we need to invest our time, energy, and resources into strengthening our democracy and creating a political economy where everyone’s basic needs are met. Wouldn’t that be crazy? I have no doubt that effective altruism, like Mr. Bankman-Fried, will be nothing more than a footnote in human history gone awry. 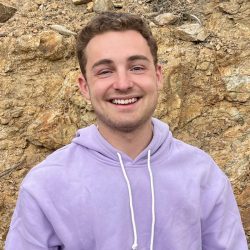 Mike Degen is a FinTech Columnist at Grit Daily. His interests include business, technology, and policy.